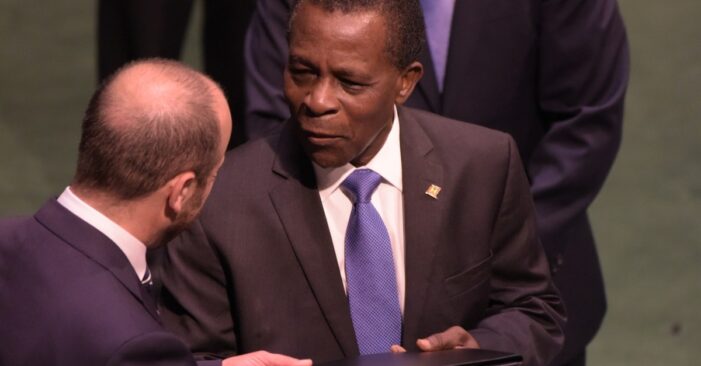 Grenada’s two main political parties on Wednesday June 1, 2022, nominated 41 candidates to contest all 15 seats up for grabs in the June 23, 2022, general election.

Prime Minister Dr. Keith Mitchell is leading the ruling New National Party (NNP) into the election and is hoping to win a third consecutive term in office. In the 2018 elections, the ruling NNP party captured all 15 seats with 58.91% of the votes and a voter turnout of 73.65%. Dr Mitchell, the incumbent candidate for St. George Northwest, has been the parliamentary representative for that constituency since 1984.

The main opposition National Democratic Congress (NDC), which last won a general election in 2008, is being led by attorney Dickon Mitchell. After completing the nomination process, Dr Mitchell expressed profound appreciation for the outpouring of love and support.

The current voters’ list has a tally of 87,794. However, that figure is subject to change as persons have until June 7 to file claims and objections, the outcome of which can affect the final list. In 2018, there were 78,122 Grenadians registered to vote.

At the close of nomination, forty-one individuals were nominated as candidates for the General Elections of June 23, 2022, in Grenada, Carriacou and Petite Martinique. The National Democratic Congress (NDC) and the New National Party (NNP) nominated fifteen candidates each.

Further, the Parliamentary Elections Office (PEO) advises the public that an elector who does not replace his or her expired voter identification card cannot be denied his or her right to vote on Election Day.

The “right of a person to vote” speaks to ‘if on polling day, he is qualified and registered as an elector in that constituency, and his name appears on the current list to be used for that constituency’.

The presentation of the voter identification card is required to verify the identity of the individual who is voting. Therefore, electors are asked to present their voter identification cards before receiving a ballot. CARICOM and the Organization of American States (OAS) have confirmed they will send observer missions for the June 23 general election in Grenada.

Press Secretary for the Prime Minister’s Office, Philomena Robertson, says the government is still awaiting a response from a third organization – the Carter Center – on whether it will have representation on the ground. On March 13, 1979, the Grenada democratic election process received a setback when Maurice Bishop led members of the New Jewel Movement (NJM,) in a bloodless revolution, which overthrew former Prime Minister Eric Gairy. At the time, Gairy was on an official visit to the United States.

Bishop sought greater labor rights, gender equality and less dependence on the United States and Western countries in general, while helping guide the People’s Revolution. The Grenadian Revolution would last for four years, until Oct. 19, 1983, when members of the NJM captured Bishop and several Cabinet members of the People’s Revolutionary Government and executed them. Days later, the United States, having already conceived plans for an invasion of the small Caribbean Island, followed through on its intention with Operation Urgent Fury.