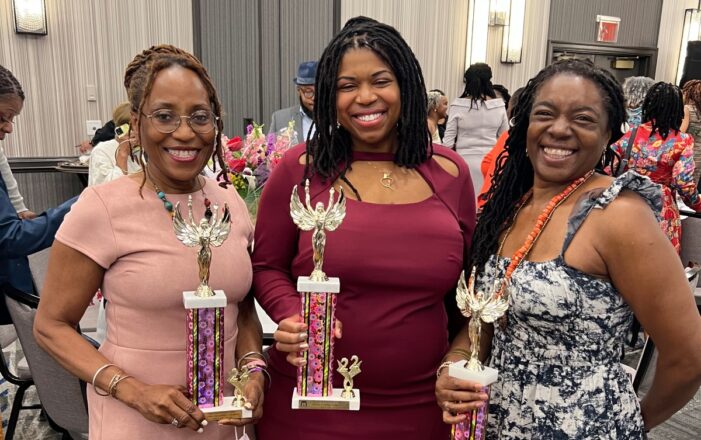 Ask anyone who was there, and they will tell you that the 500 Men Making a Difference 5th annual Ladies Brunch ‘Boss Edition’ on Saturday May 28, 2022, was an outstanding and very enjoyable event altogether. The venue was the Brooklyn Marriott by the Brooklyn Bridge. The brunch was beautifully organized, and had a full house of guests, family and friends.

The Rev. Dr. Kim Best prayed over the brunch. Wayne Devonish, chairman of 500 Men, set the tone for the day with generous remarks about the 40 awardees and their work, and Daryl Person delivered opening comments noting that he knew better than to stand between Black folks and their food so he kept it short. The food choices were unlimited starting with fruits, main course meals such as pasta, eggs, sweet potatoes, and snacks like donuts and cookies was satisfying to the taste buds. The music choices were appropriate and pleasant, and consisted of R&B and soul music. Singer Jerena Brown blessed the packed audience with her vocal talent by singing “I’m Every Woman” by Whitney Houston.

The 5th annual Ladies Brunch ‘Boss Edition’ honored 40 amazing women who have positively impacted their community through their hard work and dedication to make a change in the world. 500 Men Making a Difference are firm believers in showing love and appreciation for those who are willing to go the extra mile to help strengthen the community. The award presentation was divided into four categories: Living Legends, Ones to Watch, Greatness in the Making and Contemporary Giants. From Living Legends, some of the honorees were Dr. Kim Best, CEO of Healing Hearts Chaplaincy where she teaches and trains individuals in Chaplaincy, as well as Lisa Evers, Fox 5 news reporter and TV/radio host of “Street Soldiers.” Evers also delivered a powerful keynote speech about addressing gun violence. From Ones to Watch, were Abria Jones, future homicide detective, and Renee S. Trotman, director of Constituent Services and Scheduler. From Greatness in the Making, were Khaya Amber Holder and Asia Shields. Last, but not least, from Contemporary Giants, Nayaba Arinde, editor of the Amsterdam News, founder of Square Circles Breast Cancer survivor support group, and the host of radio show Back to Basics on inceptionfm.com. Carline Beaubrun is the founder and creative director of Events by Carline, a 20-year internationally operated, full-service event production company based in Garden City, New York. Sharton Leid worked in the office of D.A. Charles Hynes, and now runs the successful NetStruc PR company, and is also the VP for One Brooklyn Health System. There were dozens of fantastic women with phenomenal sets of skills and experiences. There were 40 awards for 40 amazing women taking a stand and making a difference.

500 Men Making a Difference is a 501(c)3 non-profit organization that operates within the five boroughs of New York City. The organization was founded by Wayne Devonish in 2010. The mission of 500 Men is to recruit, train and match volunteers and mentors to leave an influential impact within the community. By creating a union that stands together, the program engages young men in one-on-one mentoring, hands-on community revitalization projects, group tutoring and volunteer placements.