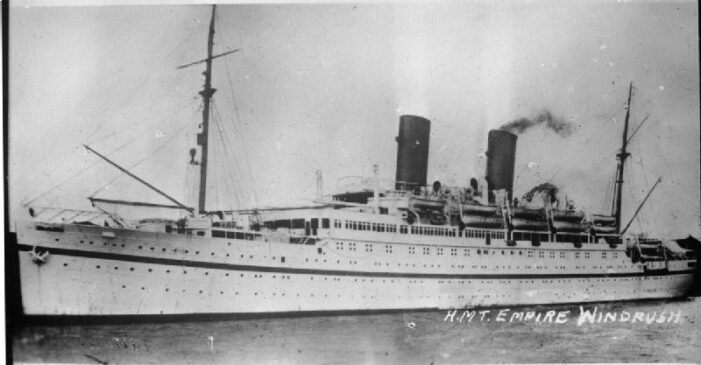 Reuben Campbell was turned away from so many venues as a young black man he decided to set up his own nightclub.

Facing yet more racism as bank managers refused to lend him money, he was undeterred – and now a film tells his story of success.

A hopeful 20-year-old Reuben Campbell bid farewell to his loved ones in Jamaica and set off to the UK in 1962 in search of new beginnings.

He is one of 500,000 people who left their homes in the Caribbean to help rebuild Britain after it had been ravaged by World War Two – the Windrush Generation.

“It was difficult,” Mr Campbell, now aged 84, remembered about arriving in the UK during one of the country’s coldest winters on record.

“I didn’t have any relatives here at the time,” he said. “I had to share a bed with a stranger which was hard for me to come to terms with because back home I had my own room with furniture.

Reuben Campbell says his generation were invited to Britain to work by the Queen. He had hoped for a warm welcome – after all, he had come to help the country rebuild, an invitation to Jamaicans that came from Queen Elizabeth II.

Instead, he was met with an icy reception and often refused entry into many establishments.

“There were times when you couldn’t even walk across the car park because you wouldn’t be able to get in,” he said.

Mr Campbell and his family ran the Iron Master pub in Bradley. Nevertheless, he got involved with his new community.

As an avid sports fan, he became the treasurer of the Wolverhampton Commonwealth Cricket Club, but said he also faced challenges there.

He said: “For us to be able to book the cricket grounds, we had to use a white guy to book it for us. We named him president of the club but it was made up of Barbadians, Guyanese, Jamaicans and Trinidadians.”

Fuelled by his experiences, Mr Campbell decided what was needed was a nightclub where his community could go without being turned away.

Reuben Campbell at a cricket presentation at the Rising Star nightclub. But even that seemed like an impossibility at times. He encountered numerous problems with being able to secure a bank loan for the bar.

“They saw us as failures, one bank manager said to me nine out of 10 black businesses fail.”

Unable to secure the funds needed, he and his business partner set about raising the cash themselves – even putting in money he was supposed to be saving for a house with his wife, Gene.

In July 1977, the Rising Star Club finally opened in Bilston, an event that attracted hundreds of people.

Mr Campbell behind the bar of the Iron Master pub with his wife Gene Smartly-dressed revellers from across the Midlands travelled for miles to the small industrial town to enjoy entertainment from household names and what Mr Campbell describes as the, “best DJs at the time”.

He ran it for seven years before setting his sights on opening the Iron Master pub in Bradley, Wolverhampton, which he believes was the first black-owned pub in the area.

The documentary depicting his story, A Joyous Jamaican Conversation, was created after staff at the Grand Theatre heard about his fascinating life and refusal to give up.

A stage production of RUSH at the theatre, a musical about the Windrush Generation, led to people sharing their own stories, including Mr Campbell’s.

While he was the treasurer of the Wolverhampton Commonwealth Cricket Club, Mr Campbell used to organise many day trips and dinner and dance events. Today, the building the Rising Star Club occupied is now the Robin 2, a leading live music venue that has Mr Campbell to thank for its legacy.

Tonia Daley-Campbell, the theatre’s audience development consultant, said: “Yes, there were difficult times but we are celebrating what the Windrush Generation brought to this city. “This is the first time that this story has been told here at the Wolverhampton Grand Theatre in this way. “We need to tell more stories like this.” “Our community is full of rich culture and diverse stories” head of programming and production coordinator, Tim Hession added. To mark national Windrush Day, the film was screened at the Lighthouse Cinema in the city centre.

Mr Campbell has been honoured for his contributions to the city with a plaque at the theatre Mr Campbell is modest about being the star of show and shared a message of hope to younger generations. He said: “If there is something you want to do, don’t let anything get in your way. There is no such thing as bad luck.”