Abortion is a Woman’s Right – Legalize it 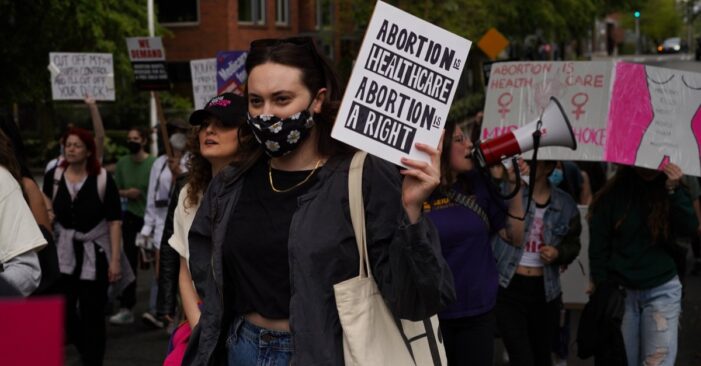 Seattle, WA, USA – May 14 2022: Supporters march at the Abortion-Rights rally. They are protesting the contents of the leaked Supreme Court draft highlighting the possible overturning of Roe v. Wade. (Shutterstock)

The right of women in the United States to have an abortion, which has existed for 49 years, has now become a matter of contention.

This right, which was accorded by the US Supreme Court on January 22, 1973, and essentially upheld again in 1992 and 2016, has come to be known as Roe v. Wade. The short-hand name is derived from the original case before the Court in which “Jane Roe” – a fictional name used to protect the identity of Norma McCorvey – brought the federal action against Henry Wade, the district attorney of Dallas County, Texas.

It is important to understand the background to the action by McCorvey. Abortions were legal in Texas at the time, but only for the purpose of saving a woman’s life. Therefore, women who wanted an abortion for any reason other than saving their lives, including rape and economic circumstances, were compelled to have the child. However, women with the financial means could obtain abortions by traveling to other countries where the procedure was safe and legal or paying a large fee to a doctor willing to secretly perform an abortion. These options were beyond the means of poorer women such as McCorvey.

Consequently, many women resorted to illegal, dangerous, “back-alley” abortions or self-induced abortions. In the 1950s and 1960s, the estimated number of illegal abortions in the US ranged from 200,000 to 1.2 million per year.

It was only after trying unsuccessfully to get an illegal abortion that, with the help of willing lawyers, McCorvey challenged the Texas law in the US Supreme Court.

The Supreme Court by a 7-2 decision, struck down the Texas law banning abortion, effectively legalizing the procedure across the US. The Court also declared that a woman’s right to an abortion was implicit in the right to privacy protected by the 14th Amendment to the US Constitution.

This right is now threatened by an opinion, allegedly drafted by Supreme Court Judge, Justice Samuel Alito, who is said to be one of the most conservative members of the court. The opinion was leaked on May 2, and he has not denied authorship.

As President Joe Biden has pointed out, “we do not know whether this draft is genuine, or whether it reflects the final decision of the Court”, but there is strong anecdotal evidence that the draft is genuine. Therefore, it has ignited protests across the major cities in the US. It has also brought a sharp response from President Biden and his vice president Kamala Harris, both of whom, within 24 hours, issued statements defending “a woman’s right to choose to have an abortion”, and declaring that “basic fairness and the stability of our law demand that it not be overturned”.

The Black Caucus of the US Congress also reacted strongly, pointing out that, overturning the existing law “will have disproportionately devastating impacts on communities of color, marginalized groups already facing discriminatory obstacles to health care and, will resonate globally”. Maxine Waters, the Chairman of the House Financial Services Committee, summed up the view of the black members of the US Congress when she declared, “women must fight with every breath of life, to resist, resist, resist”.

The fear that now permeates the US is that the Supreme Court, which comprises a majority of right-wing judges appointed by Republican presidents, including Donald Trump, will overturn the 1973 abortion law, making it impossible for poorer women, especially black and low-income women, to get safe and legal abortions. Fundamentally, women would also lose the right to govern their bodies.

This matter is now a raging political issue in the US. It will escalate as the nation proceeds to mid-term elections for the US Congress in November. President Biden has appealed to voters to protect abortion rights by backing candidates who support them in November’s mid-term elections.

The discussion will inevitably migrate to the Caribbean where women are today far better educated than in the past and where they have climbed the ladder of decision-making in government and in the private sector. Caribbean women, too, rightly want the right to make a choice about abortions. They do not accept that any Court or legislature should make that choice for them. Anti-abortion laws have also worsened the economic condition for poorer women whose circumstances force them to become single mothers, trapping them in a life of struggle and deprivation.

In many CARICOM countries, abortion is not an option available to women, except to “save a woman’s life” as in Antigua and Barbuda and Dominica, or to “preserve health” which applies in The Bahamas, Grenada, St Kitts-Nevis, Saint Lucia and Trinidad and Tobago. Haiti, Jamaica, and Suriname prohibit abortion altogether. Only three countries have a more progressive stance on this issue: Guyana allows abortions on request up to a gestational limit of 8 weeks, and Barbados and St Vincent and the Grenadines allow abortions for “broad social or economic grounds, rape, incest and foetal impairment”.

But it is an open secret that abortions are performed, as a matter of practice, throughout the Caribbean. By maintaining the existing laws, women are being criminalized, and so, too, are the doctors who perform abortions.

Undoubtedly, apart from women deeply inculcated with religious dogma that oppose abortions, the time cannot be far off when women, throughout the Caribbean, like the women of the US, will use their voting power to demand their right to choose whether or not to have an abortion. Men who share the responsibility for unwanted pregnancies, in and out of wedlock, should also join the fight to safeguard women’s right to choose.

Caribbean governments and legislators should open their ears to the position of women on this issue. It is their bodies, their health and their future that are at stake. They should be heard.