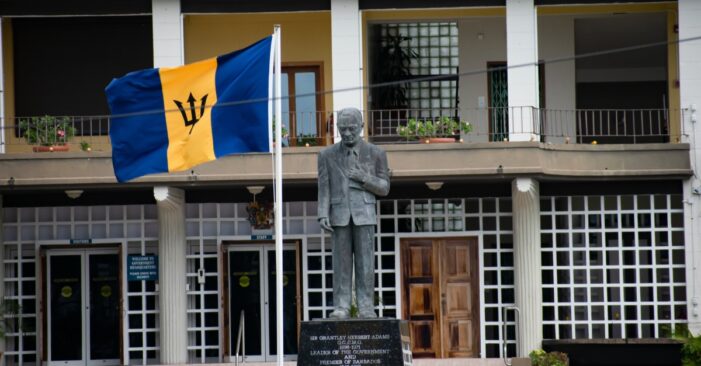 Barbados will seek to strengthen its relations with the Comprehensive Nuclear Test Ban Treaty Organization (CTBTO).

Minister of Foreign Affairs and Foreign Trade, and Senior Minister coordinating for all Social and Environmental Policy, Senator, Dr. The Most Honourable Jerome Walcott, stated this during a recent courtesy call with CTBTO’s Executive Secretary, Dr. Robert Floyd, who was on his first Caribbean and Latin America visit.

Dr. Walcott and Dr. Floyd, along with Permanent Representative to the United Nations Office and other international organisations in Geneva, and Non-resident Permanent Representative to the CTBTO, Ambassador Chad Blackman, discussed the benefits Barbados could access from being a member state of the organisation, and the way forward in establishing a National Data Centre.

They also discussed the organisation’s celebration of 25 years since the signing of the treaty by 185 member states; the systems it uses to detect nuclear testing; tsunami warning systems; using the data collected to assist Barbados in its weather forecasting; climate change adaptation and mitigation modelling; capacity building and technical training.

Minister Walcott said he was looking forward to a “lively and engaging collaboration” with the organisation, and was pleased that Barbados was the first stop for the Executive Secretary on his tour, which included Dominica, Costa Rica, and Mexico.

Also present at the courtesy call was the United Nations Resident Coordinator for Barbados and Eastern Caribbean Countries and Territories, Didier Trebucq; Permanent Secretary, Simone Rudder, and other ministry officials.

As part of the CTBTO’s Executive Secretary’s visit to Barbados, a technical stakeholders’ meeting was held. Participants included senior officials from divisions under the Ministries of Environment and National Beautification and Home Affairs, such as the Barbados Meteorological Services, the Environmental Protection Department, the Coastal Zone Management Unit and the Department of Emergency Management.

Barbados ratified the Comprehensive Nuclear Test Ban Treaty in January 2008, and has joined 169 other countries in doing so.