Biden to Haitian-American voters: You can help decide the next U.S. president

Democratic presidential nominee Joe Biden stops in Little Haiti to speak to Haitian-American leaders and ask for support on Nov. 3 as he seeks the U.S. presidency against President Donald Trump. 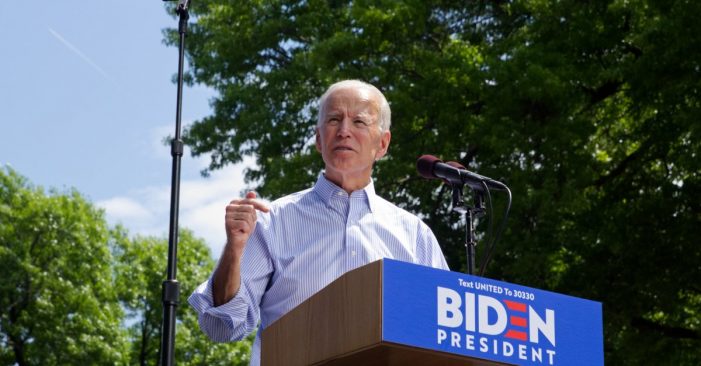 Former Vice President Joe Biden kicks off his 2020 campaign for the US presidential election at a rally in Philadelphia, Pennsylvania. – Philadelphia, PA / USA – May 18, 2019 (Shutterstock)

The sounds and culture of Haiti served as a colorful backdrop for former vice president and Democratic presidential nominee Joe Biden’s visit to Little Haiti Monday as he courted Haitian-American voters and leaders on the last day to register to vote in Florida.

During an address lasting eight minutes, 46 seconds, Biden emphasized the need to have voters, including Haitian Americans, turn out and stressed issues that unite him and the crowd.

Biden told the small crowd if the turnout is the same as it was in 2016 when President Donald Trump, whose name he never once mentioned, ran against Democratic rival and former U.S. Secretary of State Hillary Clinton, the Haitian-American community in Florida “by itself” has the potential of determining the outcome of the Nov. 3 presidential race.

“Wouldn’t it be an irony, an irony of all ironies,” Biden said, “if on election eve, it turned out Haitians literally delivered a coup de grâce in this election?”

Biden’s campaign has emphasized that the race in Florida is critical and can be decided by just 1% of the vote.

“You not only have an opportunity. I think you have an obligation to see to it you take care of the folks you care so much about,” Biden said.

In addition to Little Haiti, Biden also stopped in Little Havana to meet with Cuban-Americans before attending an NBC town hall event near downtown Miami.

The Biden campaign has struggled with Haitian-American voters, who have felt neglected as Biden seeks to woo Hispanic voters and after his running mate, Kamala Harris, failed to meet with Haitian-American leaders during a September roundtable discussion with Black leaders at Florida Memorial University.

On Monday, the campaign sought to make up for it. The invited guests, which were intentionally kept to a small number due to the COVID-19 pandemic, consisted of Haitian-American elected officials in Miami-Dade County as well as State Rep. Dotie Joseph, Congresswoman Frederica Wilson, Dr. Larry Pierre and Dr. Jean-Philippe Austin and his wife Magalie. The Austins held a $35,800-a-plate 2011 fundraiser for President Barack Obama during his second presidential bid, and Austin and Pierre have also raised money for the Biden campaign.

Concerned about voter turnout among Haitian-American voters on Nov. 3, the Austins have organized a group independent of the campaign to promote voter engagement and outreach in the Haitian-American community.

Joseph said she hopes the Biden visit will resonate not just with Haitian-American voters, but all voters.

“Our very democracy is on the line,” she said as she alluded to Trump’s Sunday motorcade photo op even as he continues to battle a positive COVID-19 diagnosis. “When we look at what these people want to do and how they want to treat us … A lot of us have came from countries where you have dictatorships and you have fascism and the things you’re starting to see with this administration; things you would have never imagined, even when you’re dealing with coronavirus; somebody who knows how to protect us and wants to protect us, and the other one just wants to go around exposing people.”

As Biden spoke in the courtyard of the Little Haiti Cultural Center, Haitian-American voters lined up along two city blocks on Northeast Second Avenue and 59th Street hoping to catch a glimpse of him. Even without hearing him, however, some said they were ready to support his presidential bid.

“I’m happy for the visit,” Franklyn Charleston, 60, said amid the waving Biden-Harris posters and traditional Haitian horns playing carnival music, known as rara. “Since this government came into power, life here has just dropped. It was better with Obama and even better with [President Bill] Clinton. This president here has been a troublemaker and we cannot just let the country go flat.”

Biden said a lot is at stake. The Nov. 3 presidential election, he said, will decide “what kind of nation we’re going to be, who we are, what we stand for. Will we continue to reach out or whether continue to push people away like what’s happened now? Or will we take care of those people, who, through no fault of their own, found themselves among those families, over 205,000 people who have died from COVID without much help at all. “

“This is the most important election,” Biden told the Haitian-American leaders. “The character of the country is literally on the ballot.”

Biden last visited Little Haiti in 2010 when he came to Miami to meet with Haitian community leaders after the January 12 earthquake in Haiti to announce the designation of Temporary Protected Status, or TPS, by President Barack Obama for eligible Haitian nationals because of the disaster, which left more than 300,000 dead. Trump has since tried to terminate the status, which is now the subject of at least a half-dozen federal lawsuits.

Biden opened Monday’s return visit by recalling that 2010 visit, during which a photo of him with Haitian community activist Marleine Bastien was taken. That photo was used during the recent Democratic National Convention.

A devout Roman Catholic, who in 2010 quietly stopped at nearby Notre Dame d’Haiti Catholic Church to pray after meeting with the community, Biden stressed that like Haitians, he too was a man of faith and believed in honoring families.

“Family first,” he said, touching on a cultural heart-string of Haitians. “What we need is faith. We need to have faith….You’ve reached out, you’ve left nobody behind. You made sure that people know they have a home with you. There’s nothing more difficult to deal with, to experience, the loss of family.”

The Little Haiti Cultural Center’s neighboring Caribbean Marketplace was the site of Trump’s 2016 visit, and his promise to the community during his presidential bid to be its “greatest champion” if elected. That meeting was with a select group of Haitians, many of them at the time, frustrated and angry over the involvement of the Clintons in Haiti after the quake.

Biden steered clear of Haitian politics on Monday, and instead appealed to Haitians on what’s happening in America, including the COVID-19 pandemic.

Still, his campaign emphasized a first by any U.S. presidential candidate: the outlining of specifics of how a Biden-Harris administration would benefit Haitians.

Ahead of Monday’s meeting, the campaign issued a “fact sheet” on the former vice president’s commitment to Haitian Americans, if elected. President Trump, the campaign said, has “abandoned and insulted” Haiti and “has pursued policies that undermine U.S. interests and hurt and disrespect millions of Haitian Americans in the United States.”

The Biden campaign vows to halt deportations for Haitians during his first 100 days, immediately review the Trump administration’s decision to terminate TPS, offer a path to citizenship for TPS holders, and reinstate the Haitian Family Reunification Parole program.

The campaign’s commitments are among a list of priorities that more than 60 Florida-based organizations that service the Haitian-American community are also seeking to get from a Biden-Harris administration in a letter currently making the rounds before being sent off to the campaign.

The letter also requests support for United Nations compensation for cholera victims following the introduction of the deadly disease into Haiti by U.N. peacekeepers 10 years ago this month, and the reinstatement of Haitian eligibility for the H-2A and H-2B temporary worker visas, which Trump also ended.

In Haiti, where there has been frustration over U.S. foreign policy under Trump, the U.S. presidential election is being closely watched in the hopes that a change in administration in the U.S. will also mean a change in U.S. policy toward the country.

Haitian President Jovenel Moïse has been ruling by executive order since Parliament became dysfunctional in January. The Trump administration has taken a hard-line stance against Haitian opposition parties and civil society, expressing concerns over credible elections taking place under Moïse, and has called for elections to be held as soon as it is technically feasible.

Haitians, who have been holding out hope for support by Biden on a transitional Haitian government, may be disappointed to learn that under Biden’s Haiti policy, he, like the current administration, also says he wants elections in Haiti “as soon as possible.”

Several Haitian-American leaders in attendance said they believe the visit will have a positive effect on undecided Haitian-American voters who this time around are not trying to decide whether to vote for a Democrat or Republican like in 2016, but whether to go vote.

“I think whoever in the Haitian community was on the fence, [this] should help them get to the polls,” Miami-Dade County Commissioner Jean Monestime said after the visit. The visit and Biden’s promise to return, Monestime said, “was a step in the right direction.”

North Miami Beach Commissioner Michael Joseph also welcomed the Little Haiti stop. “I believe we can work with this administration; they are looking out for our best interests,” he said.

But Joseph also issued a warning: “Hopefully we don’t fall into the same mistakes as the past.”