“If your response to war in Ukraine is ‘they’re just like us,’ remember that so are the people of Yemen, Syria, Kurdistan, Iraq, Afghanistan, Palestine,” said one British lawmaker. 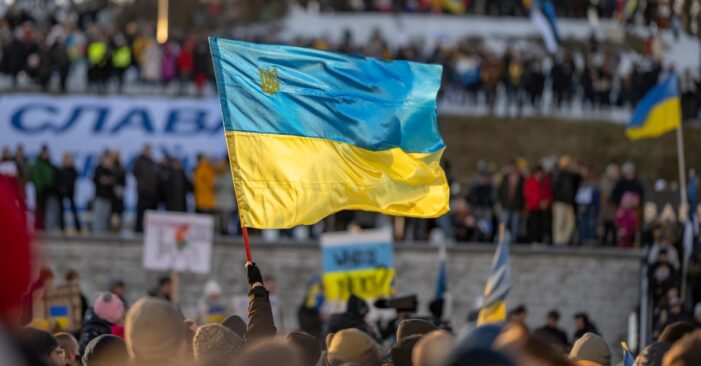 By Julia Conley, The Real News

The Arab and Middle Eastern Journalists Association on Sunday was among those criticizing coverage from major international news outlets which suggested the Ukrainian people are more worthy of sympathy than victims of other military conflicts in Palestine, Iraq, Afghanistan, and elsewhere outside of Europe.

A viral video showing a girl confronting a supposed “Russian soldier” was actually a young Palestinian, Ahed Tamimi, who was arrested at age 16 for an altercation with an IDF soldier in 2017 and was imprisoned for eight months in Israel.

Standing “in full solidarity with all civilians under military assault in any part of the world,” AMEJA listed a number of comments made by correspondents for CBS News, Al Jazeera English, The Telegraph, and French news network BFM TV in which Ukrainians under attack were referred to as “civilized” and “prosperous,” with some remarking that the civilians look like an unidentified “us.”

“They seem so like us,” wrote David Hannan of The Telegraph. “That is what makes it so shocking. War is no longer something visited upon impoverished and remote populations.”

Comparing Kyiv to cities in Afghanistan and Iraq, Charlie D’Agata of CBS News commented that Ukraine’s capital “is a relatively civilized, relatively European” city, “one where you wouldn’t expect that, or hope that [an invasion is] going to happen.”

“AMEJA condemns and categorically rejects orientalist and racist implications that any population or country is ‘uncivilized’ or bears economic factors that make it worthy of conflict,” the organization said. “This type of commentary reflects the pervasive mentality in Western journalism of normalizing tragedy in parts of the world such as the Middle East, Africa, South Asia, and Latin America.”

“It dehumanizes and renders their experience with war as somehow normal and expected,” AMEJA added.

The group called on journalists and newsrooms around the world “to train correspondents on the cultural and political nuances of regions they’re reporting on, and not rely on American- or Euro-centric biases,” garnering statements of solidarity from the National Association of Hispanic Journalists in the US and the Asian American Journalists Association.

AMEJA was among the first large organizations to condemn the suggestion by numerous reporters that the invasion of Ukraine is more shocking or unjust than the US invasions of Afghanistan and Iraq in the early 2000s, the US-led intervention in Syria, the US-backed Saudi offensive in Yemen, and the US-backed military occupation of the Palestinian Territories by the Israeli government.

“As a Middle East analyst I am floored by the blatant double standard on resisting occupation and repression.”

“If your response to war in Ukraine is ‘they’re just like us,’ remember that so are the people of Yemen, Syria, Kurdistan, Iraq, Afghanistan, Palestine,” said Nadia Whittome, a member of British Parliament for the Labour Party, on Sunday. “Everyone has the right to self-determination and safety.”

On social media, Ukrainian President Volodymyr Zelensky’s vehement statements condemning Russia’s invasion, rallying the public, and vowing to fight for his country’s right to self-determination have captured national attention, as have stories of civilians standing up to the Russian military.

But in one case, a viral video showing a girl confronting a supposed “Russian soldier” was actually a young Palestinian, Ahed Tamimi, who was arrested at age 16 for an altercation with an IDF soldier in 2017 and was imprisoned for eight months in Israel.

The viral video, which was viewed more than 12 million times on TikTok, “really reveals the difference between how white European resistance is treated as opposed to anywhere else,” tweeted writer and organizer Joshua Potash.

Realizing that people applauded this girl because they think she’s Ukrainian, when in reality they ignored her when this actually happened because she’s Palestinian, really reveals the difference between how white European resistance is treated as opposed to anywhere else. https://t.co/MUtmnw9lsP

“The entire West should do a lot of reflecting on the not so subtle message the past few days sent to Palestinians,” said Gutman. “‘We are perfectly capable of collective outrage, action, and recognition of international law but with you we just don’t care.’”

Matt Duss, foreign policy advisor to Sen. Bernie Sanders (I-VT) and a Ukrainian American, tweeted that “the bravery of Ukrainians” and “the support being shown by Americans” have made him proud in the past week.

However, Duss added, “as a Middle East analyst I am floored by the blatant double standard on resisting occupation and repression.”

With countries across Europe welcoming Ukrainian refugees after aggressively and steadfastly refusing entry to asylum-seekers fleeing wars from South Asia and the Middle East, critics are “demanding that this humanitarianism be extended to all people regardless of background,” said Boston Globe opinion writer Abdallah Fayyad.

The remarks of newscasters and the policies of European leaders serves as a “reminder of the kind of rhetoric non-white refugees have had to endure our entire lives, even after we’ve been given asylum and become citizens,” tweeted Rep. Ilhan Omar (D-MN). “Every news anchor and world leader doing this is calling black and brown people something other than human.”