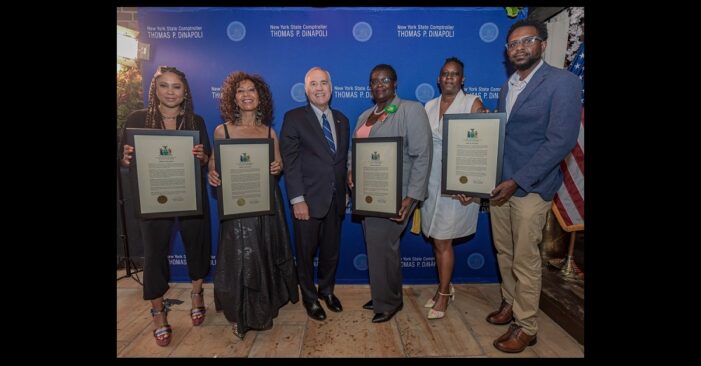 “We gathered in Brooklyn to celebrate the Caribbean community and recognize extraordinary individuals of Caribbean descent. Each of these leaders has given back to New York state through their pursuits in the arts and public service, and I look forward to continuing to support and uplift the diverse communities and cultures that call our great state home,” said State Comptroller DiNapoli.

More pictures of the event are available on the State Comptroller’s Flickr.

The event was hosted at Suede restaurant and emceed by curator and producer, Jodine Dorcé, with music provided by Andre White.

State Senator Roxanne Persaud represents Brooklyn’s 19th Senate District. She currently serves as the chair of the Social Services Committee. In addition to her work as a state legislator, she is dedicated to community involvement and encouraging others to become civically engaged.

Angela Yee is a host of the nationally syndicated morning show The Breakfast Club. Angela is also on the Board of Governors of the We Are Family Foundation, a board member of the American Foundation for the University of the West Indies, and serves as the first-ever ambassador for the New York Public Library system.

Brooklyn Caribbean Literary Festival (BCLF) is a platform designed to facilitate conversations about Caribbean identity. Through these conversations, BCLF explores the depth of Caribbean culture and its centuries-long tradition of storytelling.