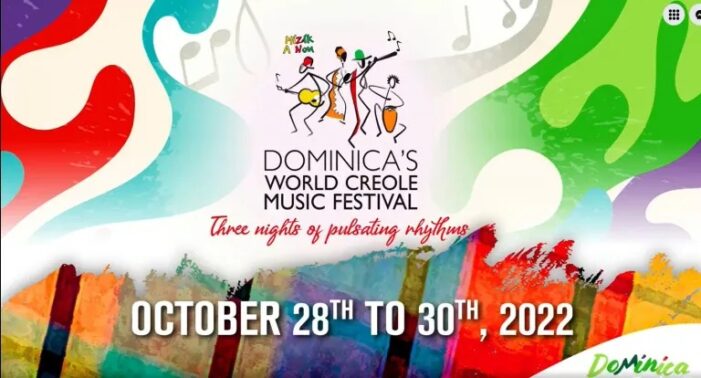 Roseau, Dominica: The Commonwealth of Dominica is all set to welcome the World Creole Music Festival to its shores as the Ministry of Tourism, International Transport, and Maritime Initiatives launched the 22nd edition of the festival. On Wednesday, the ministry hosted a press briefing and announced that it would start on 28 October 2022 and end on 30 October 2022.

Known as the much-awaited festival in the Caribbean, it has witnessed suspension two times due to the halt of the COVID-19 pandemic. Denise Charles- the Minister of Tourism, International Transport and Maritime Initiatives, stated that the festival would help to hike the number of tourists and once again relive the tourism industry. It is anticipated that there will be great hype for the festival this year.

She also outlined that makeup artists and various accommodations are already fully booked and stated that patrons have shown massive confidence in the festival brands.

“Come enjoy the three nights of music, ambience, food, culture, and vibes which are unique,” she further added.

Minister Charles asserted that the authorities are working to make it a world-class event with significant investment by the government. She also extended gratitude to several artists from Guadeloupe, Martinique, Saint Lucia, and the United States of America for showing great interest in the World Creole Music Festival.

In order to boost the economy, the World Creole Music Festival will emerge as the biggest event and has embarked on a series of one-on-one meetings with potential corporate sponsors to partner with the government. She said that the previous reports of the event show that it brings returns up to six times the total investment.

The authorities outlined that the festival websites are upgraded to give better user experiences, and people can now book tickets, makeup artists, accommodations and much more at https://dominicafestivals.com/. Denise Charles stated the early bird season tickets for the World Creole Music Festival are available on the website, costing around $300 for three nights (special price for 24 hours starting 10 August, Wednesday 7 pm ). While the price of a regular season ticket for three nights is $375, and a nightly ticket for $150.

People can also experience the Village VIP and the Party VIP experiences with a theme “Coastal Villages”, where patrons will be able to enjoy the real Dominican coastal village within the World Creole Music Festival vibe. The officials of Discover Dominica Authority said that the VIP experiences are being hosted in partnership with NexConneX and Radiance Productions. The comprehensive features of the PVIP and VIP will be revealed in a few days.

It will include various music styles such as African rhythms like Soukouce and New Orleans’ Zydecco, have also made an appearance at this festival. Along with Salsa, the other Caribbean and international music genres like Dancehall/Reggae, Soca, and Calypso have been on the WCMF stages.