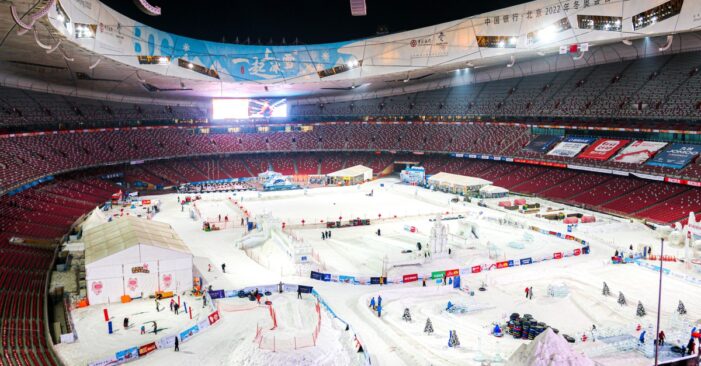 After a stumble in the Olympic qualifiers, Erin Jackson’s gold-medal dreams were over. Jackson failed to qualify for the 500-meter event at the Beijing Olympics, but then something beautiful happened. Her teammate Brittany Bowe gave up her spot, giving Jackson a second chance. Jackson did not waste it, picking up a gold medal in the 500-meter event Sunday in Beijing.

Jackson was the final member of Team USA to skate Sunday. She took part in the second-to-last skate of the day. Jackson had a tall task ahead of her. Miho Takagi of Japan put up a 37.12 early in the event, and remained in the top spot the entire time.

Jackson — the No. 1 ranked skater in the world — proved she was up to the task. Jackson got out to a strong start, and kept up that momentum throughout her skate. She finished with a time of 37.04, narrowly beating Takagi for the gold.

With the performance, Jackson became the first Black woman to win an individual speedskating medal at the Olympics.

Jackson nearly didn’t make it to Beijing. Her stumble during Olympic trials was enough to keep her from qualifying for the games. Two days later, Bowe gave up her 500-meter event spot to Jackson so that Jackson could take part in the event.

Bowe’s kindness was rewarded. The United States eventually received a third spot in the 500-meter event. Bowe received that spot, and took part in the event Sunday.

Brittany Bowe and Kimi Goetz do not medal in 500-meter event
Brittany Bowe was the first member of Team USA to skate Sunday. Bowe got out to a strong start, and finished with a time of 38.04. That put Bowe in line for the bronze, but with so many other skaters left, it was expected Bowe would drop in the standings as more event progressed. That’s exactly what happened. Bowe finished 16th, though was not expected to medal in the 500-meter event. Bowe excels in the 1,000-meter race. She’s expected to be one of the favorites in that event, which will occur Thursday.

Kimi Goetz was second to skate for Team USA. Goetz was making her Olympics debut after failing to qualify in 2018. Goetz was expected to make the team in 2018, but sustained a concussion on the first day of Olympic qualifiers and dropped out. Goetz finished with a time of 38.25. She finished in 18th place.