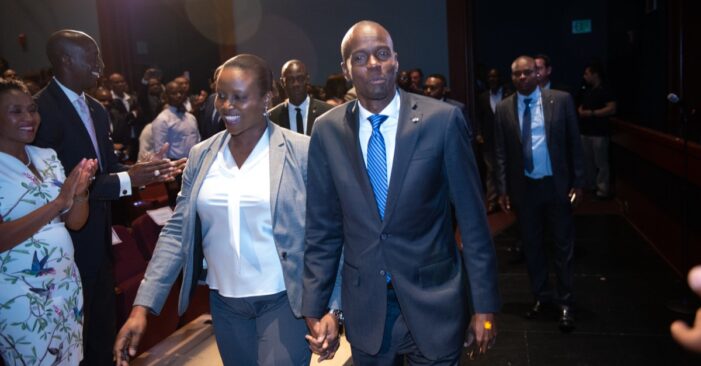 Miramar, Florida/USA – April 15, 2018: Haitian President Jovenel Moïse on stage at the Miramar Cultural Center. He spoke to a capacity audience about Haiti’s progress during his first year in office. (Shutterstock)

Joseph Joel John, 51, was extradited from Jamaica to the U.S. on Friday and appeared before a federal magistrate judge in Miami on Monday afternoon, according to federal authorities. He is charged with conspiring to commit murder or kidnapping outside of the U.S. and providing material support resulting in death, knowing or intending that such material support would be used to prepare for or carry out the conspiracy to kill or kidnap.

He faces a maximum sentence of life in prison if convicted.

John is the third person to be charged for his role in the assassination plot targeting Moïse, who was killed by a squad of gunmen in an overnight raid at his home in July. The president’s wife was wounded in what the Haitian embassy in Washington said was a “well-coordinated attack by a highly trained and heavily armed group,” while their daughter hid in a bedroom and escaped.

Mario Antonio Palacios, a 43-year-old Colombian national, and Rodolphe Jaar, a 49-year-old dual Haitian-Chilean citizen, were both arrested in January.

Federal prosecutors allege John and up to 20 others participated in the plot against Moïse, and John helped secure vehicles and tried to obtain guns for the attack against the Haitian president. The criminal complaint unsealed in federal court in Miami claims John attended a meeting with co-conspirators just before the assassination, after which many of them left for their mission to kill Moïse.

He also allegedly was present when an unnamed co-conspirator, a dual Haitian-American citizen who was arrested by Haitian authorities, secured a former Haitian judge’s signature on a request for assistance to arrest and imprison Moïse. The operation began as a kidnapping attempt but turned into an assassination plot.