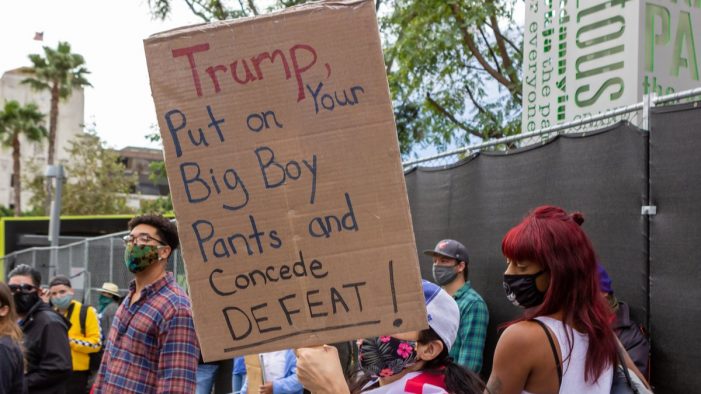 More than 100 former GOP senior national security officials who served under former Presidents Reagan, George H.W. Bush and George W. Bush, as well as President Trump, are urging party leadership to demand the president cease his “anti-democratic assault on the integrity of the presidential election” and concede.

“It has been clear for over two weeks that Joe Biden won the 2020 Presidential election, garnering 306 electoral votes, far more than the 270 electoral votes required to be elected,” reads a letter signed by the group of former officials, known as Former Republican National Security Officials, that was released on Monday.

“While the President is legally entitled to request recounts and file good-faith legal challenges, he has presented no evidence of widespread fraud or any other significant irregularities. Nearly every case filed by the President’s team across multiple states has been summarily dismissed,” the letter continued.

The letter’s signatories include former Pennsylvania Gov. Tom Ridge, the first leader of the Department of Homeland Security under President George W. Bush; former Defense Secretary Chuck Hagel, who served under President Obama and was previously a GOP senator from Nebraska; and former Director of National Intelligence John Negroponte, who held that position in the younger Bush’s administration.

The letter said the president’s refusal to concede in the race, which a number of leading news networks projected President-elect Biden won earlier this month, poses “significant risks to our national security, at a time when the U.S. confronts a global pandemic and faces serious threats from global adversaries, terrorist groups, and other forces.”

“The delay in allowing transition teams to meet and confer with officials on the Coronavirus Task Force and at the National Security Council, the Departments of State, Defense, and Homeland Security, and the other departments and agencies critical to U.S. national security means that the incoming Biden Administration will be less prepared to defend America’s security when it assumes power in 59 days,” the former officials continued.

“These concerns are not just hypothetical: the 9/11 Commission concluded that the shortened transition to the George W. Bush Administration during the election dispute in 2000-2001 ‘hampered the new administration in identifying, recruiting, clearing, and obtaining Senate confirmation of key appointees’ who were responsible for addressing the gathering threat of al Qaida terrorists in the months leading up to the 9/11 attacks,” the former officials also stated in the letter.

The former officials went on to state that the “election is over, the outcome certain.”

While they noted that there have a been a number of Republican leaders that have come out to call on Trump to “respect the will of the American people” in recent days, they said it’s time for the rest of party leadership to “put politics aside and insist” Trump “cease his dilatory and anti-democratic efforts to undermine” election results and begin the transition process.

The letter comes months after the group threw its backing behind Biden in the presidential race in August. At the time, 70 members signed on to back the then-Democratic nominee in the election. More than 50 additional members later joined them in supporting Biden in October.