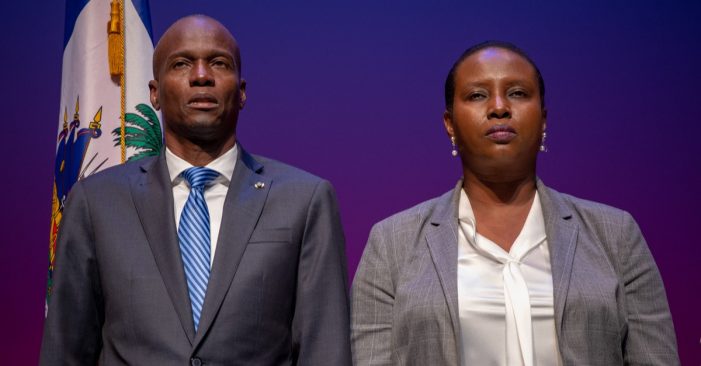 The widow of Haiti’s assassinated president has returned to the Caribbean nation after being treated in Florida for wounds suffered in the attack.

Martine Moïse was seen wearing an arm sling and a bulletproof vest after arriving by plane at Port-au-Prince airport on Saturday.

Her husband Jovenel Moïse was killed by assassins in their home on 7 July.

Mrs Moïse was injured in the attack, and was flown to a hospital in Miami, Florida for treatment.

In a tweet, a Haitian official said Mrs Moïse had returned to the country to prepare for her husband’s funeral next week.

Flanked by security agents, she was pictured being greeted by Interim Prime Minister Claude Joseph and other officials on the tarmac.

Mrs Moïse has made few comments since the attack, for which police have blamed a group of foreign mercenaries, most of them Colombians.

From her hospital bed, she recorded an audio message in which she described the moment assassins “riddled” her husband with bullets after bursting into their home in the middle of the night.

Mrs Moïse said the attack happened so quickly that her husband was unable to “say a single word”. Earlier this week, she tweeted: “This pain will never pass.”

Mr Moïse, 53, had been president of Haiti, the poorest nation in the Americas, since 2017. His time in office was rocky as he faced accusations of corruption and there were widespread demonstrations against him earlier this year.

Correspondents say that as a witness to the attack, Ms Moïse could help investigators understand who carried out the assassination and why.

Many of the details surrounding the attack remain a mystery.

Haitian police say a group of mainly foreign mercenaries – 26 Colombians and two Haitian Americans – made up the group that carried out the killing.

At least 20 have been detained, while three were killed by police and five are still on the run.

Haitian police have also arrested a Florida-based Haitian doctor, Christian Emmanuel Sanon, whom they described as a “key suspect” in the assassination.