Here’s Who Hochul Might Choose to Replace Brian Benjamin as Her No. 2 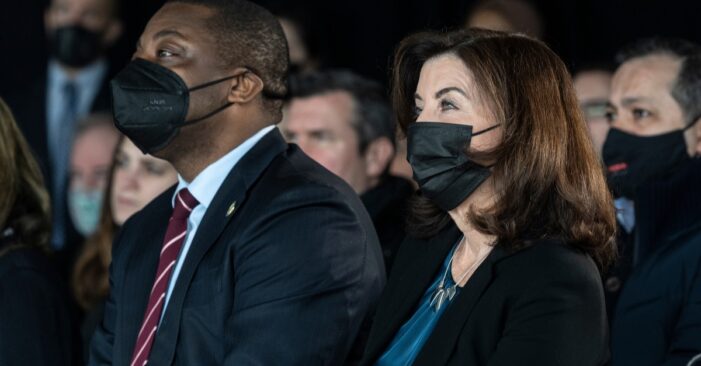 Gov. Kathy Hochul’s team is suggesting she mull over a handful of non-white state lawmakers who represent New York City — including one she previously considered to be her second-in-command — to replace ex-Lt. Gov. Brian Benjamin, The Post has learned.

State Sen. Jamaal Bailey (D-Bronx), the head of the Bronx Democratic Party, Assemblywoman Catalina Cruz (D-Queens), and state Sen. Leroy Comrie (D-Queens) are among the names being floated for Hochul to tap for the job after Benjamin resigned Tuesday following his federal indictment in an alleged campaign finance scheme, three sources told The Post on Wednesday.

Before Hochul was sworn in as governor in late August, The Post reported that she was eyeing both Bailey, 39, and Benjamin, 45, to replace her as lieutenant governor. Comrie, a former City Council member and deputy Queens borough president who is black, was not previously considered for the position.

Cruz — a progressive Latina who “really wanted” the job in August before Hochul opted to select Benjamin as LG — has already started being vetted in recent weeks to potentially replace Benjamin, another Democratic source said.

Assemblywoman Karines Reyes (D-Bronx), a 37-year-old Latina and former nurse, is another potential LG contender, according to the source.

Former Bronx Borough President Ruben Diaz Jr., who Hochul’s team also considered for the post in August, was not interested in taking the job then and likely still prefers to “ride into the sunset,” a separate Democratic source close to him told The Post on Wednesday.

“I heard that Ruben took himself out, he was not interested. He spoke to the governor a couple of times [in August],” the source said of Diaz, a former state Assemblyman. “He was ready for the private sector. He didn’t run for mayor and then this came up.”

“He took it seriously. But his feelings that he wanted to ride into the sunset didn’t change,” they added. “He’s not interested in being the lieutenant governor and if he wasn’t then, he’s not now. He doesn’t want to be in public life anymore.”

Though Benjamin stepped down Tuesday, the scandal-scarred former state lawmaker is currently still on the ballot for the June Democratic gubernatorial primary, and it may prove a difficult task to yank him off after he was nominated alongside Hochul at February’s New York Democratic Party convention.

“The only way to get off the ballot is death, disqualification or moving out of state,” state Board of Elections spokesman John Conklin said Tuesday.

During a radio appearance Wednesday morning, Hochul said she is “looking into” whether she can replace Benjamin as her running mate following his arrest, though she admitted it was unclear whether she would be stuck with her former second-in-command or could have his name removed from the June 28 Democratic primary ballot to avoid being tainted by association.

“We don’t know right now, at this time. We know this is something we’re looking into,” Hochul said on WNYC.

“The laws are very complicated,” she added. “But that’s something we’re examining right now.”

When host Brian Lehrer suggested that Benjamin disqualify himself by temporarily moving to New Jersey, Hochul responded, “You give him a call, Brian, and you can tell him that’s your thought. I don’t have control over that.”

“But yeah, that is the option, I think … because death is the other one,” she added. “And I think it’s running for another office.”

A state Democratic Party source told The Post on Wednesday that party officials were weighing whether Benjamin could relocate to the federal district of Northern Georgia or Eastern Virginia, where he was granted permission to travel after being released from custody on a $250,000 bond.

“Clearly, he has a nexus with these other states,” the Democratic insider said.

The possibility of having Benjamin run for another office is likely impossible, the source said, adding, “the options are all bad until we figure it out.”

A top Democratic state election official told The Post that one way for Hochul to get Benjamin off her ticket is to request the Democratic-majority state legislature pass a law allowing the party to reconvene, remove him from the ticket and subsequently choose a replacement.

Doug Kellner, Democratic co-chairman of the state Board of Elections, said that option is preferable to attempting to get him to temporarily move out of state or putting his name on the ballot for a down-ballot office.

“Hochul can nominate someone for lieutenant governor, but [the selection] can’t get on the ballot unless they change the law,” he explained.

Meanwhile, Hochul denied speculation that she “might try to poach” former city councilwoman and Brooklyn deputy borough president Diana Reyna, the running mate of rival candidate and outgoing US Rep. Tom Suozzi (D-Long Island), as her next lieutenant governor.

“I’ve not even heard that rumor,” she said. “That’s — so, no. I’m — this is very early in the process. Obviously, there’s a lot of people to consider, and … there’s been absolutely no decisions made.”

During a Zoom press conference on Wednesday, Reyna evaded the question when asked if she would accept a potential offer to replace Benjamin.

“These are hypotheticals until primary day, we don’t know what will happen, right?” she said. “I just want you to know I haven’t received a call like that. So I’m not sure where the rumors are coming from.”

Also Wednesday, Hochul insisted the unsealing of a five-count federal indictment against Benjamin “was a surprise, it really was,” despite reports last month that revealed he was under investigation — and his admission to The Post in March that he was questioned by federal authorities earlier this year.

“But it was clear to both of us that he could not continue to serve as lieutenant governor,” she said.

Hochul announced Benjamin’s resignation late Tuesday afternoon, following what sources said was her demand that he step down.

When asked why she selected Benjamin to be her No. 2 last year even though non-profit news outlet The City had documented his questionable fundraising practices during his unsuccessful city comptroller campaign, Hochul said, “I made the best decision I could with the information I had at that time.”

“He filled out the background check forms and [was] asked whether or not there had been investigations, you know. We had been told that everything that had risen up had been addressed,” she said.

“You know, everything was clean, and that’s what we’re told in the process.”

Hochul went on to concede the vetting process used ahead of picking Benjamin is in need of an upgrade.

“Clearly, we need to have a different process, a more strengthened, streamlined process that can get us to more detail than we had at the time,” the governor said. “So I [was] not aware that there had been investigations from federal authorities or even the district attorney’s office at that time. Clearly, there would have been a different outcome had we been aware of that.”

According to his indictment, Benjamin, then a state senator representing parts of Harlem, lied on vetting forms he submitted to Hochul’s office while she was considering who to name lieutenant governor following former Gov. Andrew Cuomo’s resignation last year over a sexual harassment scandal.

At the time, Hochul, a moderate Democrat from Buffalo, said she wanted someone from New York City “who understands the challenges firsthand” as part of her plan to “have a very diverse administration.”

Benjamin’s defense lawyers denied Tuesday that Benjamin tried to arrange a $50,000 charitable state grant in exchange for more than $50,000 in illegal campaign contributions, saying he would “focus his energies on explaining in court why his actions were laudable — not criminal.”