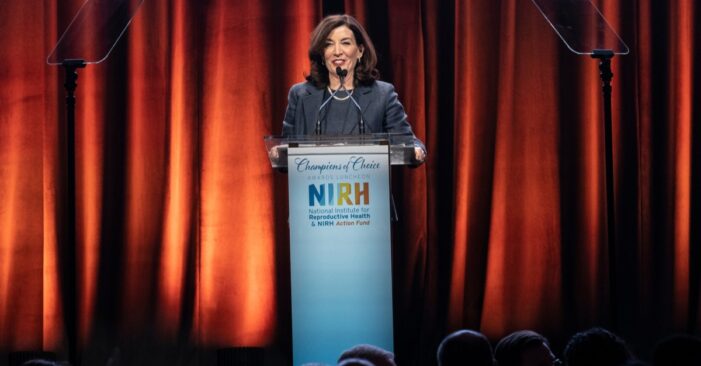 Gov. Kathy Hochul is pushing state lawmakers to change the state’s election law and allow candidates on the ballot to be removed as she searches for a replacement to her former lieutenant governor, Brian Benjamin.

The effort to change the law included a phone call to at least one of the Democratic leaders in the Legislature, Senate Majority Leader Andrea Stewart-Cousins, who has been ambivalent about making the change with only weeks to go before early voting begins in the Democratic primary.

Hochul is calling for the law after the resignation of Benjamin from the lieutenant governor’s office following his indictment on five counts of felony corruption charges. Currently, a candidate for office after accepting a nomination cannot be removed from the ballot unless there are narrow circumstances, such as leaving the state or dying.

Speaking with reporters on Tuesday, Hochul indicated Benjamin is unlikely to leave the state. The governor acknowledged the time line for replacing Benjamin is constrained by the political calendar. Early voting begins June 18 and absentee ballots must be printed and mailed in the coming weeks.

“Right now the best option is to get the Legislature and ask them for their support for legislation to correct this deficiency in current law,” she said.

State Assemblywoman Amy Paulin, a Democrat from Westchester County, has indicated she will introduce a bill that would allow for the removal of candidates facing criminal charges or a terminal illness. The measure could gain a floor vote in her chamber.

But Democratic lawmakers who control the state Senate and Assembly have been hesitant to support making changes to the election law ahead of the primary vote.

Still, Stewart-Cousins did not completely rule out consideration of a bill, which was yet to be introduced as of Tuesday afternoon.

“She put it on the table in terms of having a conversation with my conference,” Stewart-Cousins said.

The Suozzi campaign in a statement blasted Hochul’s support for changing the law.

“Why would the Senate and Assembly make another secret back room deal with Kathy Hochul to replace her indicted former Lt. Governor?” the campaign said. “The members of the Senate and Assembly will already pay a political price for her Buffalo Bills deal, her refusal to address crime and the LG saga. How long are they willing to carry Kathy Hochul’s water? She made these messes, she needs to clean them up herself.”

Republicans, too, blasted the proposal as opportunistic.

“For the past year Albany has been the corruption capital of the country and Democrats have sat idly by enabling this bad behavior. Now they want to go a step further, changing state law to protect their political interests,” said Senate Minority Leader Robert Ortt. “Any Senator who supports this corrupt scheme will be held accountable by the voters of New York this November.”