The company has sent letters to three of the workers on strike stating that they have been permanently replaced. Neither UMEC nor Catsimatidis himself responded to Documented’s request for comment. 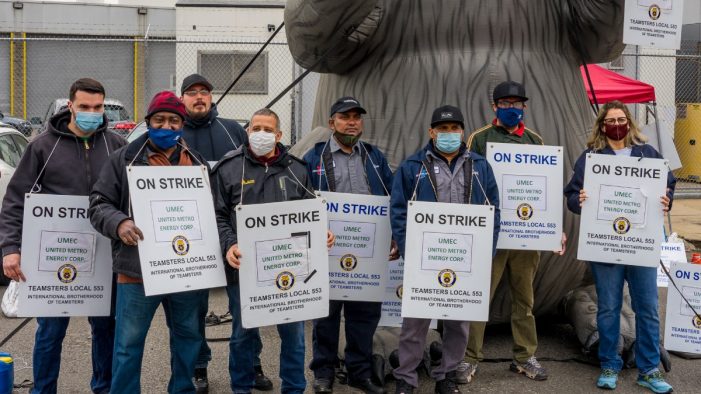 For five years, Dennis Spence has worked as a terminal operator for United Metro Energy Corp. (UMEC). An immigrant from the small Caribbean island of St. Vincent, Spence has three daughters and thought himself fortunate to have a job that paid $27.50 an hour. However, the work was inherently dangerous. Every night, he was required to climb up and down several large oil and chemical tanks to gauge their capacity. One small slip could be fatal.

Throughout his five years at the company, discontent was brewing among his coworkers. Among the reasons, the fact that Spence and some colleagues were underpaid compared to the prevailing wage of the area, which is the basic hourly rate of wages and benefits paid to a number of similarly employed workers.

The discontent came to a head, when on April 19th, Spence and 24 of his fellow workers at the UMEC terminal in Brooklyn, many of whom are immigrants from the West Indies, went on strike, demanding an increase in wages, improved health care coverage, and a pension.

“The morale is very low because there is no grievance process,” he said. “You can be fired for anything. Everyone is on pins and needles. You don’t know if your number will come up next.”

The company is owned by the Republican, former mayoral candidate, and multibillionaire John Catsimatidis, who also owns the Gristedes supermarket chain and the conservative WABC radio station. Tensions between UMEC and the workers began brewing at the terminal since they first voted to unionize in 2019. Despite the recognition of the union, UMEC and the workers had not been able to reach an agreement on the specifics of a contract for two years.

In their view, their demands are modest. Throughout the pandemic, the essential workers at UMEC provided gasoline, diesel, and heating oil across the five boroughs, including for schools, hospitals, and mass transit. Despite this, the workers were paid wages as much as 20 percent lower than other unionized terminals in the area.

“We are here fighting for workers at United Metro Energy to receive the standard wages and benefits for fuel workers in New York City,” said Demos P. Demopoulos, Secretary-Treasurer of Teamsters Local 553, which represents the workers. “These workers are standing strong for a fair contract, and they have 120,000 other Teamster members in New York City standing behind them.”

After the workers began their action, UMEC sent out notices to three of the workers on strike stating that they have been permanently replaced. Workers claim that management threatened to fire one worker for every day of the strike. Spence was among the first to receive the notice.

“It put things into perspective,” he said. “ To look into the future it was kinda concerning. I had to look at myself in the mirror and wonder if it was worth it. But I think sticking together with the group, it’s worth it. The other guys’ presence gives me strength.”

Ramesh Hardowar, an immigrant from Guyana, is nervous that he might be next on the chopping block. After his wife passed away two years ago, he is the sole provider for his two daughters. Although he has worked for the company as a service technician, removing and installing boilers, for 14 years, he has seen little increase in his salary. Losing his job could be devastating for his family but still, his fear doesn’t trump his frustration with the job.

“We don’t need a million dollars, we just ask to give us something that shows progress and gives us the mind to work more. You’ve got to treat your workers good. The workers are the ones making the money and they’re at home collecting it.” he said.

Assemblymember Emily Gallagher, whose district the terminal resides in, has expressed her support for the workers.

“The workers on strike at United Metro Energy Corp. deserve the same wages and benefits as their industry peers,” she said in a statement to Documented. “Instead, the company’s Republican billionaire owner is paying half as much, with healthcare that’s too expensive for most workers and their families to access. North Brooklyn is a union country and we won’t stand for it.”

Neither UMEC nor Catsimatidis himself responded to Documented’s request for comment. Currently, negotiations between the union and UMEC have gone cold. According to Demopoulos, UMEC has refused to concede to the union’s key demand. Negotiations are set to resume May 5.

“We’re talking wages, where talking medical but he [Catsimatidis] doesn’t want anything to do with the pension,” said Demopoulos. “That’s a very important matter on my end.”

Regardless of the outcome of the strike, Dennis Spence has no regrets.