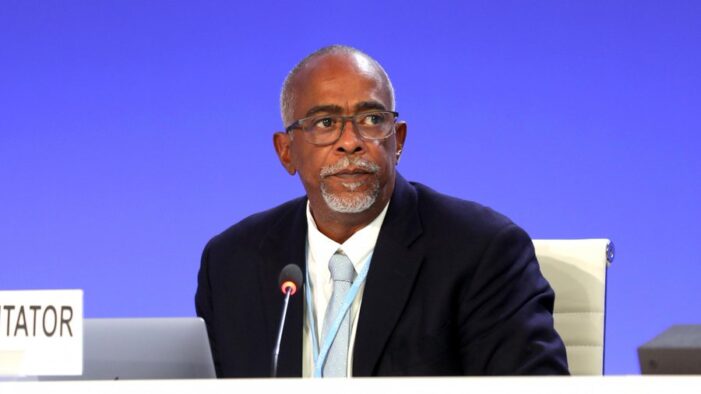 The CARICOM Secretariat and the Caribbean Community Climate Change Centre (CCCCC) join with the Government of Barbados, the CARCIOM negotiators and the broader Alliance of Small Island States (AOSIS) grouping in expressing its shock and sadness at the sudden passing of Dr. Hugh Sealy. Dr Sealy has been a key part of the region’s and AOSIS’s climate change negotiating machinery since 2007 where he specialized in mitigation activities and carbon markets. He served as the Member of the Executive Board of the Clean Development Mechanism under the Kyoto Protocol from 2008-2016 and served as the Board’s Chairman in 2014. Dr. Sealy also co-chaired negotiations on Article 6 (carbon markets) at the Conference of Parties (COP) 23 in 2017 and COP25 in 2019. Hugh also Co-chaired the Integrity Council for the Voluntary Carbon Market.

Dr. Sealy was a champion of CARICOM and SIDS issues, including 1.5 to Stay Alive, in the climate negotiations and an ardent defender of the special and unique circumstances of SIDS. With his pleasant and persuasive attitude and charisma, coupled with his expert knowledge, energy, passion and commitment, Hugh was able to influence and shape the climate negotiations to safeguard the interest of SIDS. As a negotiator, he was principled, pragmatic and steadfast about climate justice and the need for greater climate ambition and action. As a scientist, he was a visionary; and his ideas to reclaim and reuse wastewater in Barbados to improve the water resilience of Barbados to the effects of climate change was both innovative and paradigm shifting. Dr. Sealy, up until his passing, provided invaluable technical support to the CCCCCC and CARICOM Secretariat that helped shaped CARICOM’s negotiated priorities and position as part of AOSIS. Hugh was an important part of a small but dedicated and influential group of CARICOM negotiators who continue to punch above their weight in the Climate Change negotiations. His loss will leave a tremendous gap in the team, particularly as the Region and the world move into the post-COP26 implementation of Article 6 and as the Region commences its preparations for COP27.

Hugh was also very generous with this time and his knowledge. He could always be counted on to participate fully and give his inputs into a myriad of issues no matter how busy he was, in the interest of developing the most informed CARICOM Negotiating positions. With his strong background in climate change and water resources management, Hugh contributed greatly to national and regional endeavors to build the Region’s water resilience as well as to build the climate resilience in the health sector.

Barbados lost a loyal son, and CARICOM lost a skilled and expert climate change negotiator and a friend. The CARICOM Secretariat and the entire CCCCC family send our thoughts to his family, his colleagues from the University of the West Indies, Cave Hill and the Government of Barbados and to those who knew and admired him. May he Rest in Peace.