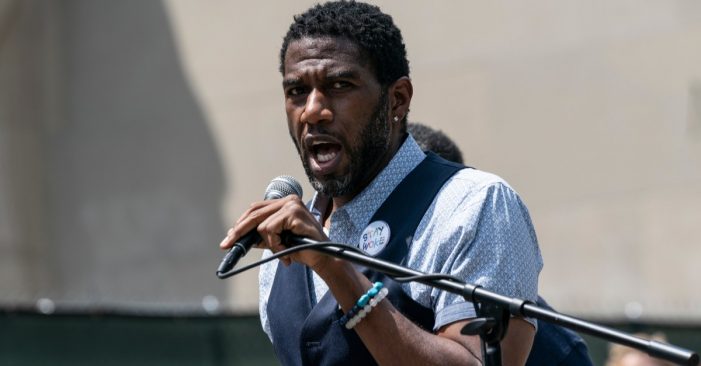 To date, New York State has had one black Governor, David Paterson, who served between 1990-2000. However, this can change if one of the June 2022 Democratic candidate candidates wins before finally contesting against a Republican candidate in November. Jumaane Williams became a New York City Public Advocate in 2019. Contributing to over 60 bills on issues that protect job seekers and workers in New York, bills that protect struggling homeowners from excessive tax burdens, promote public safety and fight discrimination in the housing systems.

Now, he is running for Governor to bring ‘transformational change’ to the Empire State.

In an exclusive interview with People, Power & Politics Radio Show, Williams sat and discussed some of his plans and shared his thoughts on events and issues of concern among New Yorkers.

Listen to an interview with Jumaane Williams, Candidate for Governor of New York below:

Who is Jumaane Williams?
Presently, he is serving as a Public Advocate in New York City. Jumaane Williams, in his over two years of public service, prides himself on his numerous accomplishments and contributions as a product of the public system he is trying to improve.

“I am a public-school baby from preschool to the masters. I got educated in the New York public school system. “He describes himself as a community organizer by training. “And so, I’m proud because people told me that I had to choose between being an activist and elected official. And so, we showed that you can have activism and be a productive elected official,” he revealed.

Vision as New York’s Governor
Williams is motivated to create a State that serves the marginalized people of the state, which constitutes a majority. He envisages working for the people in dire need of protection, housing m and challenges in mental health.

“Normal didn’t work for most folks in New York City or New York State. It probably worked for the donors, but the rest of the folks are still struggling. The vision is to have a new normal in New York state, where Albany works for the struggling New Yorkers. But we have 120 odd billionaires in the state that made 220 billion. They made that over this past pandemic. And those are the folks who are getting the most protection. While people are struggling from Brooklyn to Buffalo.”

Plan to Deal with Rising Inflation
As concerns rose over inflation across the country and New York, rising gas prices significantly affected New Yorkers. The latter are already struggling with the high cost of living in the state.

As the next Governor of New York, he planned to address inflation by addressing resource inequality. “We must make sure that the resources people need to live healthy and functional lives are at a cost that is very accessible to the rate people are getting paid,” he explains.
Deliberately increasing the minimum wage, addressing the housing problem by assisting with housing costs, comprehensive health care, and increasing access to broadband services are part of the strategies for combating inflation. “We must pay people more. $ 15 an hour sounds like a lot, but one that’s not happening all across the state. But we have to make sure that people get paid more and have access to the things that money can buy at a helpful rate.”

His focus is to make basic things that make a living in New York bearable. “And so, we can do those things to raise and elevate how much folks are getting paid and bring down the costs of what it takes just to be a human being in New York State.” In his view, the life of New Yorkers has not changed with the incumbent Governor.

Addressing the High Cost of Rent in New York
The astronomical cost of rent in New York is one of the unflattering characteristics associated with the state. Under his administration, he plans to protect small house owners, build millions of housing units, make budgetary provisions by providing housing vouchers to cater to the increasing housing needs, and fix the endemic management problems within the sector. “Put in place and support a real program to prevent small owners from losing their homes. We also plan to build and preserve 1 million units over the next ten years,” he says.

He is proposing a holistic approach to curb the situation. “It’s a two-pronged approach. You can put in as much money as you want. If you have poor management, it’s not going to help. We have to talk about housing and homelessness together. You have to understand what the population needs and be able to provide it. Right now, we’re not doing that at all. We need income-targeted housing.”

Furthermore, on the issues between slum landlords and the use of litigation, he expressed satisfaction that the present administration is exploring the legislative angle. “I think what happens is people should be losing their buildings, but at some point, people hold on to these buildings for way too long and do not provide the services that tenants need. On a state level, I would love to work with municipalities across the state; We also have to make sure that these owners cannot do business with the city. Often, we see people who are bad and poor actors still able to do business with the city, and we must provide accountability that changes behavior.”

Over the challenge of public housing, he explains that it requires more investment despite the hardship. “So there has to be a true investment in nature and much better management. Many of these issues are pre-pandemic, and we had leaders who have ignored them. These issues are one of the reasons I’m running because I’ve been working on these issues for a very long time. I’m proud of what we’ve done with Council as public advocates,” said Williams.

Plan to Address the Mental Health Pandemic in New York
New York presently has a mental health problem contributing to crime and a high level of misdemeanors. Presently, he advocates strengthening a continuum of care that includes mental health in New York City. He intends to expand at the state level. “But we’ve been very clear, even at the beginning of this pandemic, that we would, unfortunately, see violence go up. Housing insecurity, food insecurity, access to jobs, and pay were all getting worse. We knew that mental health was a problem,” he explained.

Now that stigma around mental health appears to be reducing; accessibility must increase. “Once you take the stigma down, you also need access to the care. As a governor, I’m keenly aware of that. I want to make sure that changes.”
Supporting Community and Ethnic Media Outlets

The minority communities need media outlets that cover issues of importance to members of their community. The past Mayor of New York City endorsed and supported such outlets, but there is a need for support at the State level.
Public Advocate Jumaane Williams agrees that the goal has not been achieved, and his administration will work towards actualizing the dream. “So, we have to make sure we have a better way of communicating to people quickly,” he said. “We spend a lot of money on advertising. We must make sure that advertising is going to all ethnic media. They’re the best voices to reach out to people in a language and culture they understand. They understand how people receive the information and how they want to receive it. And if we’re not taking advantage of that one, I think it’s not the right thing to do.”

Ways to Support his Campaign
The public advocate called for support through volunteering and donating to his campaign to support his goal. His gubernatorial candidacy runs on a grassroots campaign. “You can sign up to volunteer, and when people can donate $5, $10, $15, $20, it’s beneficial. So, we’re asking folks to send in whatever they can,” says Williams.

He explains that his quest for the office is to bring the much-needed support that the struggling New Yorker requires now. “So, we have an opportunity to do something better than where we were. New York City became the epicenter for the Coronavirus because we just had a failed leadership. The current Governor continues that leadership, and people are beginning to see that now.”

To learn more about Jumaane Williams and how you can support his campaign, visit www.jumaanewilliams.com