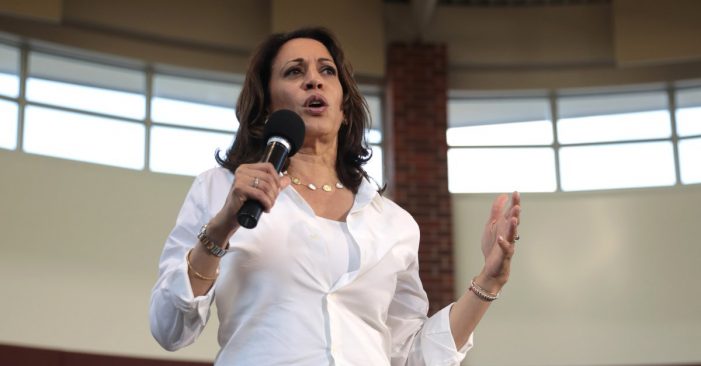 Kamala Devi Harris attends a casual talk at the Democratic Picnic, and shares a few things to share with her many supporters. – IOWA – JULY 03, 2020 (Shutterstock)

On Saturday, November 7, America started to breathe again. Joe Biden was announced as the winner of the 2020 presidential elections along with running mate Kamala Harris as his vice-president. It’s a series of firsts: first woman and first black woman. Harris is the daughter of Jamaican and Indian immigrants.

Harris walked onstage Saturday night to “Work That” by Mary J. Blige and radiated pure joy and excitement befitting this moment in history and glowed in a white suit, a gesture of respect to the color of suffragists who fought to enfranchise women.   In her first speech as vice-president-elect, Harris noted her ascension to the role comes 100 years after the 19th Amendment was ratified and 55 years after the signing of the Voting Rights Act, which expanded who could participate in American democracy. She praised Joe Biden for having “the audacity to break one of the most substantial barriers that exist in our country” by selecting a woman as his running mate. Here are her words:

“And to the woman most responsible for my presence here today, my mother, Shyamala Gopalan Harris, who is always in our hearts. When she came here from India at the age of 19, she maybe didn’t quite imagine this moment.

But she believed so deeply in an America where a moment like this is possible, and so I am thinking about her and about the generations of women, Black women, Asian, white, Latina, Native American women, who throughout our nation’s history, have paved the way for this moment tonight, women who fought and sacrificed so much for equality and liberty and justice for all. Including the Black women who are often, too often overlooked but so often proved they are the backbone of our democracy.

Tonight, I reflect on their struggle, their determination and the strength of their vision to see what can be unburdened by what has been. And I stand on their shoulders. And what a testament it is to Joe’s character that he had the audacity to break one of the most substantial barriers that exists in our country and select a woman as his vice president.

But while I may be the first woman in this office, I will not be the last. Because every little girl watching tonight sees that this is a country of possibilities and to the children of our country regardless of your gender, our country has sent you a clear message: Dream with ambition, lead with conviction and see yourselves in a way that others may not simply because they’ve never seen it before.”

Harris’s words are so relevant to us as immigrants. Too often, especially in the last four years, we had an administration who demonized immigrants at a level of pure evilness: children forcefully separated from their parents; children put into cages; hysterectomies performed on women without their permission; to mention a few horrors. And so, while we know that these horrors cannot be undone or the trauma erased, we can look forward with hope and optimism. We know that America was built on the blood, sweat, and tears of immigrants. We know that immigrants contribute to the success of America. We are proud to see a daughter of immigrants from the Caribbean and Asia’s continent ascend to such a high office. We are proud of Kamala Harris, and we know she will continue to make us proud.

We look forward to the restoration of the Soul of the Nation. God bless America.