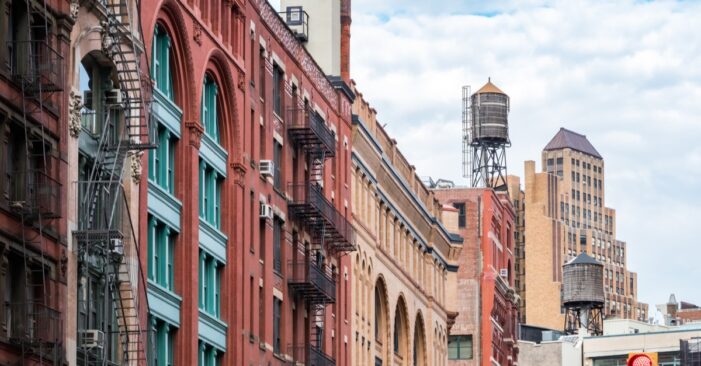 By Clifford Michel, THE CITY

The real estate industry is pushing back on a state bill that would limit rent hikes and ensure lease renewals for over a million tenants — launching a house-to-house phone campaign to rally the public against the protections.

A new group called Homeowners for an Affordable New York is calling city households and warning of dire consequences if the “Good Cause” anti-eviction measure becomes law.

After delivering the message warning of higher rents and higher property taxes, operators name the bill — A5573 — and offer to transfer the phone call directly to their state lawmaker’s office.

“We need to stop this bill,” said one operator who called Friday in Brooklyn to a landline in the district served by Assemblymember and Brooklyn Democratic Party leader Rodneyse Bichotte. “May we connect you with Assemblymember Bichotte’s office?”

Homeowners for an Affordable New York filings with the state Joint Commission on Public Ethics don’t say who is bankrolling the phone calls. But in its most recent monthly newsletter, the Rent Stabilization Association of NYC, a major landlord group, claimed credit for the effort along with “various statewide industry leaders,” calling it “one of the most robust public relations campaigns in the history of our industry.”

The group said it conducted polling on the issue late last year to craft the message. In addition to phone calls, RSA also plans to pay for mailers as well as digital and radio ads. The effort is expected to last at least until June, but RSA said in its newsletter: “Should we need to continue this effort beyond the end of the legislative session in June, our coalition is prepared to do that.”

Fontas referred calls to campaign spokesperson Ross M. Wallenstein, who provided a statement to THE CITY.

“Homeowners for an Affordable New York is an organization working collaboratively with property owners advocating that policymakers ensure fair and equitable solutions to practical issues in housing and real estate that affect every single New Yorker, no matter where and how they live,” he wrote.

Local Laws Upstate
The anti-eviction bill prevents tenants from being evicted by landlords for unpaid rent following an “unreasonable” rent increase, defined as exceeding 3% or 1.5 times the Consumer Price Index for the region. It also gives tenants the right to a lease renewal in most cases.

Progressive state lawmakers have introduced Good Cause bills in past sessions and gone nowhere.

On Monday, Mayor Eric Adams said he supports the concept behind the bill, though he has not weighed in on the measure itself.

Dozens of politicians, most from New York City, came out in support of the bill in an open letter to Gov. Kathy Hochul in January.

Hochul hasn’t publicly opposed or come out in support of the bill. A spokesperson for the governor didn’t address where she currently stands, instead pointing to her broader record on housing, including pandemic aid.

“Governor Hochul has taken decisive action to protect tenants — from breaking the Emergency Rental Assistance logjam, to investing $25 million in free legal services for tenants, to proposing a series of bold, achievable measures in her Executive Budget that address longstanding housing inequities — including an additional $35 million for the Eviction Protection Legal Assistance Program,” said Jim Urso, a spokesperson for Hochul, in a statement.

“We will continue to work closely with the legislature and members of the advocacy community to protect vulnerable New Yorkers and keep tenants in their homes,” Urso continued.

Hochul’s lack of a stance on the issue puts her in between her two Democratic primary opponents, New York City Public Advocate Jumaane Williams, who supports the bill, and Rep. Tom Suozzi (D-L.I.), who opposes it.

Williams’ campaign said it was crucial that Good Cause become law.

“New York is on the brink of an eviction crisis now that the governor has allowed the moratorium to lapse, and Good Cause legislation will help protect tenants from wrongful evictions,” William Gerlich, a spokesperson for Williams, told THE CITY.

“Last week Jumaane was upstate advocating for the importance of this legislation, and will continue to do so until the bill gets passed.”

Optimism in Senate
State Sen. Julia Salazar (D-Brooklyn), who authored the bill, said that she doesn’t believe that the opposition campaign will slow down the bill’s likelihood of passage.

“It really is unfortunate that the real estate lobby is able to spend excessive amounts of money to defeat this legislation, but they were not successful in doing that in 2019 when we expanded the insurance and the rent laws for rent regulated tenants,” said Salazar. “I really believe that ultimately New Yorkers are smarter than the big-money real estate PACs want to believe.”

The bill, once viewed as unlikely to pass, has picked up momentum in recent months as a potential follow-up to New York’s pandemic eviction moratorium, which expired last month. Several rallies in New York City have aimed at pushing Hochul to sign the bill.

On @BrianLehrer, @AndreaSCousins tells caller “we’re going to work on some form of Good Cause”

“I frankly don’t think the current iteration will actually be able to pass, but I do know we are continuing to work to make sure we can do something to keep people in their homes” 1/2

Supporters of the Good Cause proposal, like opponents, are targeting members of the Assembly, seeing the Senate as already likely to pass the bill.

“The Senate is basically ready to go and we’re building support in the Assembly,” said Cea Weaver, a campaign coordinator for Housing Justice for All. She highlighted pockets of support — including areas of the state that, unlike New York City, lack an existing rent regulation system.