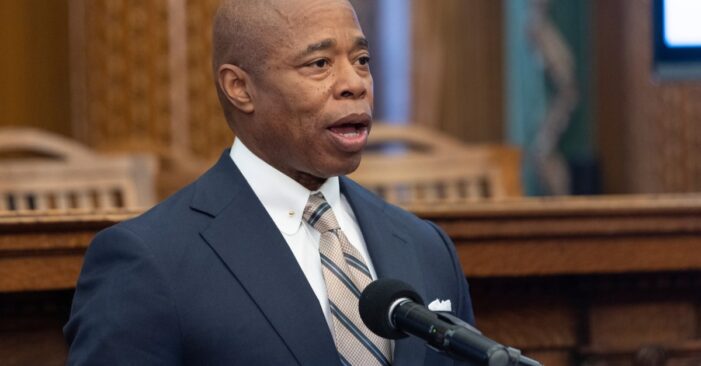 Mayor-elect Eric Adams speaks during his unveiling of 5 women to be appointed as his deputy at Brooklyn Borough Hall. – New York, NY – December 20, 2021 (Shutterstock)

New York, NY – Today, Mayor-elect Eric Adams announced the appointment of Matthew Fraser as Chief Technology Officer (CTO) and Melanie LaRocca as Chief Efficiency Officer. As CTO, Fraser will oversee the Administration’s key technology policies and initiatives, including the Mayor-elect’s proposal to build out a MyCity platform, an online portal that allows New Yorkers to access all City services and benefits.

As the City’s first-ever Chief Efficiency Officer, LaRocca will oversee the Program to Eliminate the Gap, find bloat in City agencies and make suggestions on how to reduce it, and evaluate large City contracts to find cost savings. Mayor-Elect Adams proposed creating the position during his campaign as a way to ensure City agencies are operating more efficiently and effectively.

Adams emphasized the need for the City to embrace a culture of innovation in both the public and private sectors.

“We know that governmental inefficiencies lead to inequities throughout our city – and unfortunately, inefficiency plagues our City agencies right now. Making government more responsive and streamlined will be one of my top priorities as Mayor. I know it can be done, because we did it in the NYPD with CompStat in the 1990’s. Matthew Fraser and Melanie LaRocca have a long track record of using innovation to modernize government operations. I look forward to working with them to bring our city into the 21st century,” said Mayor-elect Adams.

“Technology is one of the keys to a city’s development and growth. It can be the great equalizer. It has brought us everything, from accessibility to things that were hard to reach to the democratization of media, where anyone can have a voice or even be a star. If you get into the technical side, people will tell you it’s all about ones and zeros. My goal is to make sure all New Yorkers have the same level of access so that everybody is a one and nobody is ever zero,” said Deputy Commissioner Fraser.

“I’m truly honored to join Mayor Adam’s administration and carry out our shared vision of a more efficient, effective, and equal city. New Yorkers have the tools, the ability and the will to improve the lives of neighbors, while maintaining New York City’s unquestioned place as the greatest city in the world. I look forward to rolling up my sleeves and getting to work on day one,” said Commissioner LaRocca.

Matthew Fraser serves as Deputy Commissioner of the Information Technology Bureau in the New York City Police Department (NYPD). In that role, he has spearheaded the development of tools to streamline the process of reporting low-level crimes and track officer deployments in real time. Fraser previously served as Assistant Commissioner in the Information Technology Bureau, and before that was a project manager with the Department of Buildings.

Melanie LaRocca currently serves as Commissioner of the Department of Buildings. As Commissioner, she has worked to modernize the agency, improve response times, and ensure safety on construction projects across the city. Prior to that, she served as Vice President of Development and External Affairs at the School Construction Authority (SCA).