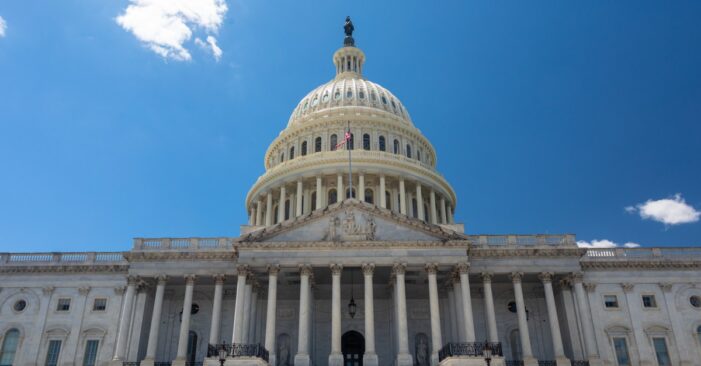 Washington, DC-Over a thousand activists and multiple members of Congress rallied today near the Capitol to call on the Senate to pass the Build Back Better bill before the holidays, as promised by Democratic leadership. Representatives Ayanna Pressley, Rashida Tlaib, Jan Schakowsky, and Lou Correa spoke at the rally before 40 protestors occupied and were arrested in an act of nonviolent civil disobedience.

Democratic leadership in both the Senate and House have committed to delivering a robust investment in human infrastructure through the Build Back Better bill by the holidays. The activists called on the Senate to “Bring it Home for the Holidays” by passing a Build Back Better bill that contains the full investment that working people deserve. They specifically called for:

“As a domestic worker, I do the work that makes other work possible. Like thousands of undocumented domestic workers, I’ve continued working during the pandemic at personal risk, but if I don’t work, I can’t support my family,” said Lucimara, a member of the National Domestic Workers Alliance worker council. “The families I work for are counting on me and my work so that their lives can continue to function. But despite my essential work, I live in the shadows and I am more vulnerable to exploitation due to my immigration status. I live in fear of being separated from my children constantly. Immigrant domestic workers like me deserve to work and live with dignity and safety. On behalf of undocumented domestic workers everywhere, I call on the Senate to invest in care and provide us with immigration protections and benefits through Build Back Better.”

“We came to our nation’s capital to remind Senate Majority Leader Schumer of his promise to deliver a pathway to citizenship,“ said Murad Awawdeh, Executive Director, New York Immigration Coalition and FIRM Action Co-Chair. “It’s time that the Majority Leader remembers that he, not an unelected bureaucrat, has the power and responsibility to build a better vision of our country and secure a true recovery. For 20 months, millions of immigrants have served on the front lines of a global pandemic, all while living under the constant threat of family separation. Now, our leaders need to listen to the majority of the American people and deliver on their promise of a roadmap to citizenship.”

“After years of putting food on the table of countless families, taking care of their children as if they were my own, and cleaning houses, I’m counting on Congress to deliver a path to citizenship. Immigrants are vital to this economy, and it’s time we are recognized for it,” said Erendira Zamacona, a member of Make the Road Pennsylvania, immigrant, and domestic worker. “Without immigrant workers, basic needs like food and care for millions would not be met. To the Biden administration and the Senate, I say: we cannot afford more broken promises. The time is now to provide a pathway to citizenship for all.”

“Immigrants like me have had our homes and livelihoods destroyed by floods, hurricanes, wildfires, and encroaching deserts. We sought refuge in the US and have given back, working as essential workers and supporting the US economy during the pandemic. It’s time for the Senate to invest in immigrants and in bold climate solutions so that we all can thrive in the places we call home. Bring it home for the holidays, Senators – the people are counting on you,” said Graphya, a CASA member from Georgia.

“As a mother of two and a DACA recipient, what I want most is to remain together with my children, without the fear of being separated. For years, undocumented people have relentlessly fought for a pathway to citizenship, a permanent solution that we deserve and that will allow our communities to continue to thrive,” said Eliana Fernandez, member of Make the Road New York and a DACA recipient. “We urge Senator Schumer and Democratic leadership to use every tool at their disposal, including disregarding the parliamentarian’s advisory opinion, to keep their promises and get us to the finish line. For our country to truly deliver an inclusive recovery, we must ensure that a path to citizenship is restored in the final version of the Build Back Better bill.”

Immigrants, immigrants in the U.S.