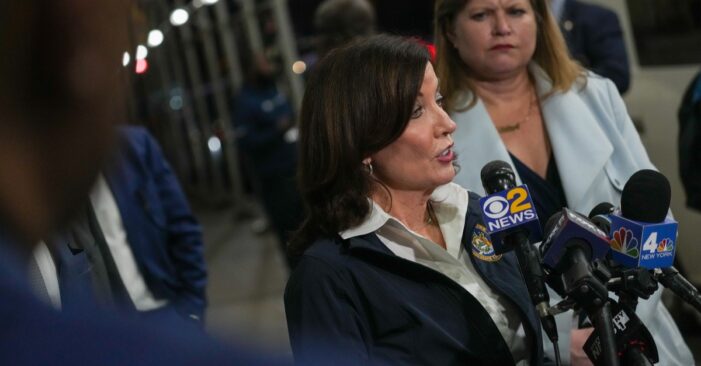 New York, New York, USA – April 12, 2022: Kathy Hochul, Governor of New York, Arrives to Speak at a News Conference Outside the Maimonides in the Sunset Park Neighborhood in the Brooklyn. (Shutterstock)

(Bloomberg) — New York Governor Kathy Hochul said she’s kicked off a search for a new lieutenant governor after her second-in-command resigned on Tuesday from office over federal bribery allegations.

Lieutenant Governor Brian Benjamin stepped down after he was charged with funneling illicit donations to one of his past campaigns. On Tuesday, he pleaded not guilty to bribery charges in federal court in Manhattan, after surrendering to law enforcement earlier in the morning. He was released on a $250,000 bond.

“We’re going to go through a process right now,” Hochul said during an interview on WNYC, a local radio station. “It was clear to both of us he could not continue to serve.”

Benjamin’s resignation comes months before his name is due to appear on the ballot in the Democratic primary in June as Hochul’s running mate. Hochul selected Benjamin to be her lieutenant governor shortly after taking over as governor in the wake of Andrew Cuomo’s resignation in August.

Hochul now leads a pack of Democratic candidates in the 2022 New York governor’s race and due to a quirk in the state’s election system, it’s unlikely she’ll be able to get his name off the ballot. “The laws are very complicated,” she said.

From at least 2019 to 2021, Benjamin participated in a scheme to obtain corrupt campaign donations from a real estate developer, according to the indictment. In exchange for the contributions, he agreed to use his authority as a state senator at the time to obtain a $50,000 grant of state funds for a nonprofit organization controlled by the developer, prosecutors allege.

Asked to address criticism that news reports had raised red flags about Benjamin’s donors in comptroller campaign before she picked him as lieutenant governor, she said that a background investigation had checked out.

“We had been told that everything that had risen up had been addressed.” she said. “I made the best decision I could with the information I had at the time.”

She said she was personally disappointed with “how this played out” but that his resignation prompted an opportunity for her campaign to “reset.”