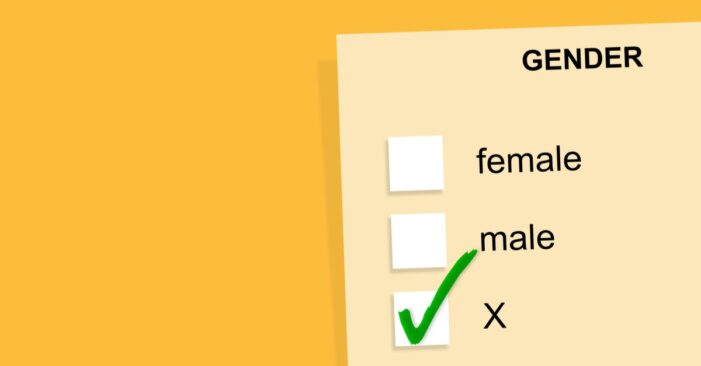 Check out your birth certificate and surely you’ll see a designation for sex. When you were born, a doctor or clinician assigned you the “male” or “female” label based on a look at your genitalia. In the U.S., this has been standard practice for more than a century.

But sex designation is not as simple as a glance and then a check of one box or another. Instead, the overwhelming evidence shows that sex is not binary. To put it another way, the terms “male” and “female” don’t fully capture the complex biological, anatomical and chromosomal variations that occur in the human body.

That’s why calls are growing to remove sex designation from birth certificates, including a recent recommendation from the American Medical Association.

I am a professor of medicine who has worked extensively on lesbian, gay, bisexual, transgender, queer, intersex and asexual (LGBTQIA+) issues. My co-author is a professor of gynecology who is deeply involved in the health of people who are trans and intersex.

Our research and clinical experience show that sex designation is not something to take for granted. For those who don’t fit neatly into one of two categories – and there are millions – an inappropriate classification on a birth certificate can have consequences that last a lifetime.

The problems with sex designation
Variations in genital anatomy happen more frequently than you might think; they occur in 0.1 to 0.2% of births annually. In the U.S., that’s about 4,000 to 8,000 babies each year.

Other sex traits don’t necessarily help either. Doctors examining the reproductive organs can find people born with both a vagina and testes, and also those born without any gonads. And when evaluating an individual’s estrogen and testosterone hormone levels, long defined as key determinants of female and male bodies, doctors find some people with vaginas still produce significant amounts of testosterone. Because of this, testosterone is not a great indicator for defining sex; higher amounts of testosterone do not necessarily make someone male.

Even karyotyping – a laboratory procedure used since the 1950s to evaluate an individual’s number and type of chromosomes – doesn’t tell the whole story. While we typically expect people to either have XX or XY pairs of sex chromosomes, many people have variations that do not fit either category. These include Turner syndrome, in which a person is born with a single X chromosome, and Kleinfelter syndrome, which occurs when a person is born with a combination of XXY chromosomes.

In short, human diversity has demonstrated that the binary categories of male and female are incomplete and inaccurate. Sex designation, rather than “two sizes fit all,” is on a spectrum. Up to 1.7% of the U.S. population – that’s more than 5 million Americans – have an anatomy and physiology that present intersex traits.

Binary designations can be damaging
Those with intersex traits who are assigned at birth to be female or male can experience medical care that harms them, both physically and psychologically.

Sometimes physicians perform surgeries to align bodies into binary categories. For example, those born with a larger than typical clitoris may have it reduced in size. But some who have this childhood surgery suffer as adults from pain and difficulty having sex.

Additionally, governments sometimes limit those with intersex traits from fully participating in society. For instance, in Australia, marriages have been annulled because governments have previously ruled that an intersex person – someone not seen to be “100% man” or “100% woman” – cannot be legally married.

Private entities often do the same. The International Olympics Committee uses cutoffs of hormone levels to determine who plays in women’s sports. As a result, some athletes have been barred from participation.

And for those with a gender identity that differs from the sex designation on a government document, discrimination, harassment or violence can result.

State governments have begun to acknowledge sex diversity. Some let gender-diverse people change their designation on birth certificates, although there are restrictions. Medicine too is changing. For example, some pediatric centers have stopped performing surgeries on newborns with differences in sex development. Still, society at large has been much slower to move beyond the use of strictly binary categories.

As clinicians, we strive to be accurate. The evidence shows that using male and female as the only options on birth certificates is not consistent with scientific reality. Evidence shows that removing this designation will tell new parents that it’s not sex assignment that’s most important at birth but rather the celebration of a healthy and happy baby.