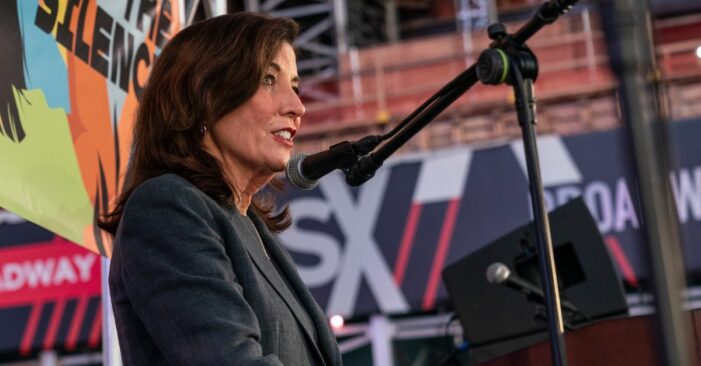 State Senate Democrats are refusing to back legislation that would help Gov. Kathy Hochul to name a new running mate to replace ex-Lt. Gov. Brian Benjamin in the June Democratic primary following his recent arrest for alleged corruption.

Democrats could remove Benjamin, who has pleaded not guilty to five felony charges, by passing one of two bills introduced to the Assembly, but the effort appears dead on arrival in the upper chamber of the state Legislature with just two weeks to go before the state Board of Elections certifies the primary ballot on May 4.

Lawmakers are scheduled to return to Albany on April 25 for the first time since passing a $220 billion state budget earlier this month.

“There are no plans to take up these bills,” a spokesperson for state Senate Majority Leader Andrea Stewart-Cousins said Wednesday.

The spokesperson added that the governor has not reached out to Stewart-Cousins about pushing legislation to get Benjamin off the ballot.

Hochul said last Friday “a lot of options on the table” when it comes to potentially removing Benjamin, who was designated as the party’s preferred nominee for lieutenant governor in February.

A spokesperson for the governor did not respond to a request for comment Wednesday about how much Hochul was pushing a legislative solution with Democratic lawmakers.

Democratic senators say they are worried about potential political blowback if they were to move forward with legislation sponsored by Assemblywoman Amy Paulin and a similar bill introduced by Assemblyman Jonathan Jacobson, especially considering recent attacks by Republicans on the outstanding proposals.

The disgraced former lieutenant governor suspended his campaign for a full term in office following his arrest last week for alleged involvement in a bribery conspiracy involving a supporter of his failed 2019 campaign for New York City comptroller.

Current state law would allow him to be removed from the ballot if he moves out of state or runs for another office.

Benjamin could not be reached for comment Wednesday and it remains unclear whether he will take any actions to remove himself from the ballot. The terms of a $250,000 bond restricts his travel to areas of New York, Virginia, Georgia and New Jersey.

Candidates for governor and lieutenant governor in New York run separately in party primaries before becoming a joint ticket for the general election.

Hochul could be stuck with former New York City Councilwoman Diana Reyna or lefty activist Ana Maria Archila as her running mate this November if one of them wins the primary for lieutenant governor and Hochul wins the primary for governor against Rep. Tom Suozzi and New York City Public Advocate Jumaane Williams, who are respectively running alongside Reyna and Archila.

Democrats face political headwinds this November in places like Long Island and political experts say state Senate Democrats appear to be protecting themselves by refusing to act on the bills that would remove Benjamin from the ballot.

“If they do anything that looks like a fix they’re gonna pay for it at the voting booth,” political consultant Hank Sheinkopf said. “They don’t want to give the Republicans anything else to work with.”