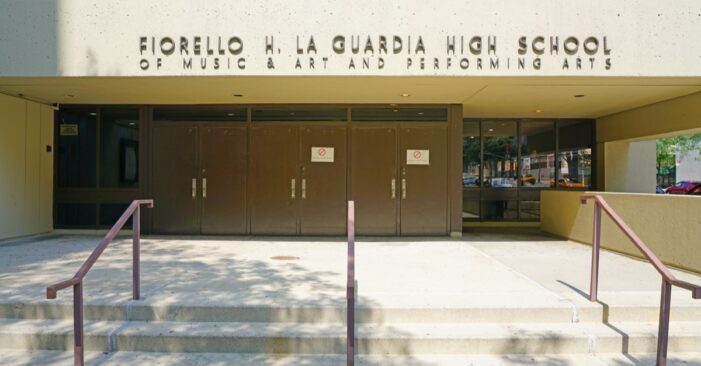 View of the Fiorello H. LaGuardia High School of Music & Art and Performing Arts, located near the Lincoln Center in the Upper West Side, Manhattan, New York. (Shutterstock)

By Christina Veiga, Chalkbeat, THE CITY

In a reversal, high schools will also continue to give admissions priorities based on whether students live within a certain borough or zone. Those priorities were set to be eliminated this year, but Mayor Bill de Blasio changed course following pushback from some corners of the city, including Queens, where families were concerned about long commutes.

District-level priorities, such as the one previously given to a handful of coveted schools in Manhattan’s District 2, are still gone. (Those were removed last year.)

Applications for middle schools will open the week of Jan. 10 and will be due the week of Feb. 28. Offers will be sent in early May.

For high schools, applications will open the week of Jan. 24. The deadline is the week of Feb. 28, with offers sent in late May.

The changes follow another year of pandemic-related disruptions to the competitive and stressful admissions process — one that critics say helps drive New York City’s status as among the most segregated school districts in the country.

An unusually large portion of the city’s schools use screens such as test scores, grades, and attendance for admission. Students who are Black or Latino, or those who come from low-income families, have disabilities, or are learning English as a new language are less likely to meet admissions requirements.

While the new policies could help encourage integration, advocates say the impact is likely dulled by the fact that there are no new initiatives aimed explicitly at bolstering diversity.

“These are big changes, but also the bare minimum,” said Nyah Berg, executive director of New York Appleseed, which advocates for school integration. “A lot of those gatekeeping tools remain or they’re lurking in the background.”

A Year Filled With Uncertainty
This year’s admissions process has been murky as decisions about how schools would be allowed to admit students dragged into de Blasio’s final weeks in office.

Mayor-elect Eric Adams will be sworn in on Jan. 1, raising questions about whether the new administration will move to put its own mark on the controversial admissions process. Current education department officials said they consulted Adams’ team about the latest reforms. A spokesperson for his campaign did not return a request for comment.

The incoming chancellor, David Banks, has declared himself “not a big believer in screens.” He hinted that more changes could be coming under the new administration.

“Screening in certain situations is maybe a good thing — we got some schools where you’ve got to audition and demonstrate a level of talent,” he recently told Chalkbeat. “But I think screens have been used, in many ways, to be discriminatory and keep other kids out of the school. And that I do not support and so we’ll be looking at all those things and figuring out the best path forward.”

‘Promising’ Middle School Changes
Before the pandemic, 196 middle schools screened applicants based on measures such as state test scores, grades and attendance. Last year, middle schools put a pause on screening applicants, since many of those measures were dramatically altered or unavailable during the pandemic. That pause will continue for another year following “positive feedback from school communities and families, as well as promising outcomes,” according to the education department.

After removing screens, the share of students from low-income families who were matched to “in-demand” schools ticked up to 48% — an increase of 7 percentage points, according to the education department. Officials, however, did not say which schools were included in that tally, only saying they considered those where incoming students had high test scores.

“This administration has brought real and lasting equitable change to the admissions process that has dismantled historic barriers and opened up opportunity for more students than ever before,” outgoing schools Chancellor Meisha Porter said in a statement.

Unlike last year, performing arts middle schools will be allowed to require auditions for admissions. Education department officials said most auditions will happen virtually, though schools can opt to do them in person.

Significant Reforms for High Schools
The most significant changes this year will happen for high school admissions.

Schools will still be allowed to screen, but they will not manage the application process themselves. Instead, students will submit applications for all screened programs through the city’s MySchools platform.

Then, a team of education department officials will use “one centrally designed rubric” to make admissions decisions, according to the department. But it’s unclear to what extent the process will truly be streamlined. While schools “should” use the same set of criteria and rubrics, the department will give wiggle room “if needed” to school leaders who “wish to deviate,” a department spokesperson said.

Screens have been whittled down to only first-semester grades from a student’s eighth-grade year and a sample of work. Schools will not consider attendance, nor will they use test scores, as last year’s state tests were opt-in and most students did not take them.

The department will share the common rubric closer to when applications open, officials said.

Depending on how many schools stick to the centralized process, those changes could add up to big departures from how the process has traditionally worked.

In the past, schools set their own screens and students had to hunt down admissions criteria for each school. Some schools required their own essays or tests, or conducted interviews. Rubrics, which detail how admissions decisions are made, were often hard to find or unavailable. The process of ranking student applications could be time-intensive and expensive for schools.

Joyce Szuflita, who runs NYC School Help, a company that assists families with their school search, said she expects parents to be concerned about the shift to using academic records from eighth-grade.

Typically, the high school admissions process begins so early in the school year that student information from only their seventh-grade year is available. As a result, many parents who hope to have their children admitted to competitive schools push their children to have a stand-out seventh grade year. Sometimes that means paying for tutoring to boost their state test scores or sending their child to school sick to keep their attendance records up.

“I think this is the first time ever they’ve used eighth-grade grades,” she said. “So people are going to be nervous about that because it hasn’t been anticipated.”

‘Incremental’ Steps Towards Integration
Many of this year’s changes echo policies that advocates have said are necessary to make the admissions process more transparent, and therefore, fair. Berg, the executive director for Appleseed, said she was “encouraged” by the changes.

“Two years ago, these processes were happening in black boxes,” she said.

But the steps are only “incremental,” Berg said, especially because the education department didn’t couple the changes with policies aimed explicitly at integration. The city could do that by, for example, giving underserved students a priority for admissions — something that almost 50 middle schools and about 35 high schools across the city have opted for.

Advocates have also argued the preservation of attendance zones and borough priorities could also shut students out of higher-performing schools beyond their neighborhoods.

Berg said it will also be important to make sure parents, and school officials who help students navigate the application process, understand the new changes.

“Transparency in policies is great, but if that transparency doesn’t trickle down to parents and students, then it can take away from the benefit,” she said. “They’re still placing students and families in the crosshairs of having to scramble through the holiday season to get applications in, in an already burdensome process.”