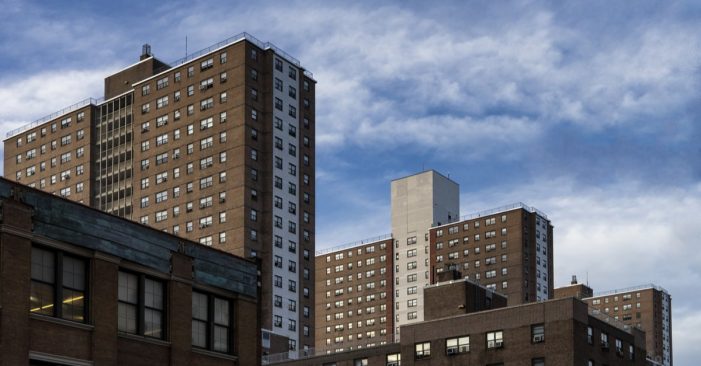 By Greg B. Smith, THE CITY

The city’s public housing authority has determined that the number of apartments believed contaminated with lead paint that house children under age 6 is triple the number it previously claimed.

NYCHA officials this week acknowledged for the first time that there are 9,000 apartments — not 3,000 apartments as they had asserted — that likely contain lead paint where youngsters live. Children under 6 are particularly susceptible to cognitive damage caused by exposure to lead.

The revelation was not made by NYCHA but by Bart Schwartz, the federal monitor appointed to oversee the nation’s biggest public housing authority after revelations by the press and federal prosecutors that the authority had for years deliberately hidden its failure to perform required lead paint inspections.

Late Thursday, NYCHA was unable to spell out precisely how many kids live in these apartments. The list of 9,000 includes apartments of relatives where children spent more than 10 hours a week.

Councilmember Alicka Ampry-Samuel (D-Brooklyn), chair of the public housing committee, blasted NYCHA for what she called yet another failure to confront its many failures.

“At this point in time, there is no room for excuses,” she said. “We should be at a place where we know the apartments that have lead exposure and who lives in them. Just that simple. To continue playing this game of paper shuffling is increasing the known risk of detrimental health hazards and brain damage in our children.

“If NYCHA cannot get it right and ensure these apartments are safe, people should lose their jobs and some should go to jail for reckless endangerment of a child,” she added.

But under the federal monitor’s oversight, NYCHA has since gone back and begun door-knocking on apartments deemed likely to contain lead. The authority also performed what are called XRF tests in these apartments to check if lead paint was present.

On Thursday, Schwartz revealed the results of that canvassing and testing: 6,000 more apartments than NYCHA originally thought had children under 6 as tenants.

“The effort reveals that a far greater number of children under six may be at risk of lead exposure than was thought just two years ago,” Schwartz said in a brief statement posted on his website.

“NYCHA reported to us this week that as a result of its dialogue with residents during in-apartment XRF testing visits, and NYCHA’s ‘door knocking’ campaign, through which NYCHA directly engages residents, it has identified a significantly larger number of apartments where children under six reside who might be exposed to lead risks,” he added.

NYCHA officials said they identified the additional units likely to have lead paint where young children reside by knocking on doors of 48,000 apartments and circulating a survey among tenants.

The discovery of these additional units was spurred by Schwartz’s team, which had pressed NYCHA to expand how it checks where children live. Before, NYCHA simply relied on what tenants told them in their annual lease renewal forms. But prodded by Schwartz, NYCHA sent out a survey across its portfolio of buildings.

On Thursday a NYCHA spokesperson confirmed the agency had “changed its policy on how it counts units. If any survey source indicates a child lives in the unit, NYCHA will treat it as having a child in that unit.”

It’s not clear what ramifications this will have regarding NYCHA’s biggest source of funding: the federal government.

NYCHA had certified in a sworn statement to the U.S. Department of Housing & Urban Development that only 3,000 apartments with likely lead paint housed children under 6. HUD supplies 90% of NYCHA’s capital funds and about 67% of its operational money.

The monitor was appointed last year after the Manhattan U.S. Attorney discovered that NYCHA was annually certifying it was performing required lead paint inspections when, in fact, it wasn’t.

Mayor Bill de Blasio initially insisted that few children living in NYCHA had been lead- poisoned, stating in 2017, “Thank God there has not been harm done to any child because of the mistakes that have been made.”

NYCHA claimed only 19 children had been exposed. But after the U.S. Attorney filed the results of the federal investigation, the city Health Department in 2018 was forced to admit that more than 1,160 children living in NYCHA had been lead poisoned over the past decade.

That same year, de Blasio announced NYCHA would inspect the 130,000 likely lead-paint apartments and clean up the toxic substance if necessary. Since then that clean up has been underway, although it was paused this spring to help limit the spread of the coronavirus.

‘The Saddest Part of This’

The monitor noted that when he first began working with NYCHA in spring 2019 to document the extent of its lead problem, “I met with resistance when I asserted that NYCHA had not done enough in this area.”

However, Schwartz praised the current leadership, including Chairman Gregory Russ, stating, “The work we have done since with NYCHA to locate those children, and to protect them, has been intensive. Under NYCHA’s new leadership, significant progress has been made.”

During a virtual meeting with Bronx public housing tenants Thursday evening, Schwartz commended NYCHA for improving how it tracks where children live. But, he noted: “There are more children who are at risk, that is the saddest part of this.”

Schwartz said NYCHA has already taken “numerous steps” to protect the children living in these apartments, although he didn’t provide details.

A NYCHA spokesperson said in all apartments with children under six that are deemed “positive or presumed positive lead,” the children “are enrolled in a program to ensure we can identify paint deficiencies and remediate on an expedited basis.”

Some of the apartments have already been cleaned up, while others “will be prioritized for abatement when funding is secured for lead abatement.”

At his daily briefing earlier in the day, de Blasio said he’d only just learned of the much bigger number of apartments with young children that likely have lead paint.

“I’m just getting this information now in the course of this gathering,” de Blasio said. “But we will follow up immediately on this federal monitor report and get down to the bottom of what’s happening and we will act on it immediately.”