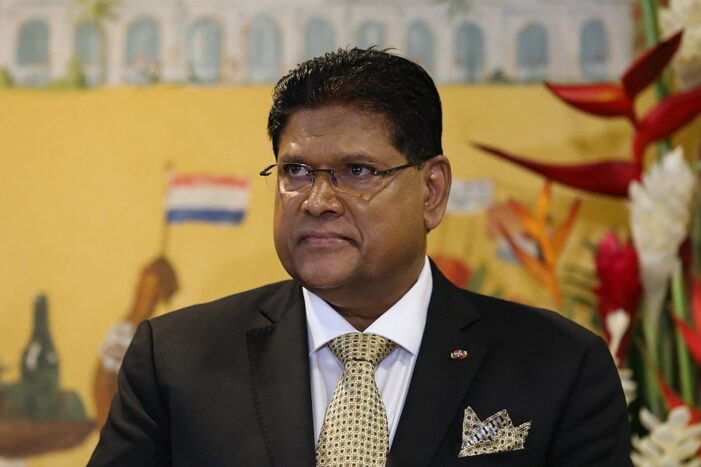 In March of this year, Prime Minister Mia Amor Mottley suggested that Africa-CARICOM Day should be celebrated on September 7, in recognition of the first-ever Africa-Caribbean Summit aimed at forging stronger social and economic ties between the two global communities. Ms Mottley was speaking during Ghana’s 65th Independence Anniversary celebrations at the Cape Coast Stadium.

Here is the statement by His Excellency Chandrikapersad Santokhi, President of Suriname, Chair of CARICOM, marking CARICOM-Africa Day on September 7: It is my distinct honor in my capacity as Chairman of the Caribbean Community (CARICOM), to address the people and governments of CARICOM and Africa on the occasion of the observance of the First ever CARICOM-Africa Day.

The historical and friendly relations between CARICOM and African countries have strengthened in recent years. Our relationship has been bolstered at the bilateral level, and within the framework of multilateral organizations such as the United Nations, the Commonwealth and the Organization of African, Caribbean and Pacific States (OACPS). In this regard, the Leaders of CARICOM had the opportunity to engage with His Excellency Georges Pinto Chikoti, Secretary-General of the OACPS, in the margins of the 43rd Regular Meeting of the Conference of the Community in Paramaribo, Suriname, earlier this year, where we discussed a range of issues that are of strategic importance to the Caribbean and Africa.

Moreover, our relationship has been bolstered by recent engagements between Heads of State and Governments of countries of the two regions. The First CARICOM-Africa Summit held virtually in September last year, under the theme “Unity Across Continents and Oceans – Opportunity for Deepening Integration” served to give impetus to our relationship. This is evidenced by today’s celebration, 7 September, as CARICOM-Africa Day, one of the historic decisions made by that Summit.

As a further concrete demonstration of our strengthening ties, allow to me to make mention of our blossoming trade and economic relations which are given expression through various initiatives aimed at deepening relations between the African continent and CARICOM. Just last week in Bridgetown, Barbados, the first Afri-Caribbean Trade and Investment Forum (ACTIF) 2022 was held. At that event, representatives of both regions advanced discussions on the ways and means to promote trade and investment. The Caribbean Community looks forward to a strengthened trade and economic partnership with Africa in the years ahead.

In these times, marked by various unprecedented challenges, we are compelled to strengthen cooperation across a range of fora to tackle issues on the global agenda and take coordinated positions and action in areas that matter most, including climate change, resilience, adaptation and natural disasters, the global financial system an issues relating to development financing, de-risking and ‘black-listing, migration, and the equitable and sustainable economic and social recovery from the ongoing COVID-19 pandemic. One of the best ways to do so is to speak with one voice in international fora where those issues are discussed.

As we commemorate this milestone in our history, I take this opportunity to extend, on behalf of the Caribbean Community, my best wishes for the wellbeing and prosperity of the Governments and People of Africa. I reiterate CARICOM’s commitment to the further strengthening and enhancement of the historical bonds of friendship, cooperation and solidarity which unite us.