‘Open the Door or We Die’: Africans Report Racism and Hostility Trying to Flee Ukraine

Thousands of African immigrants joining throngs of Ukrainians trying to flee the country say they face red tape and discrimination. 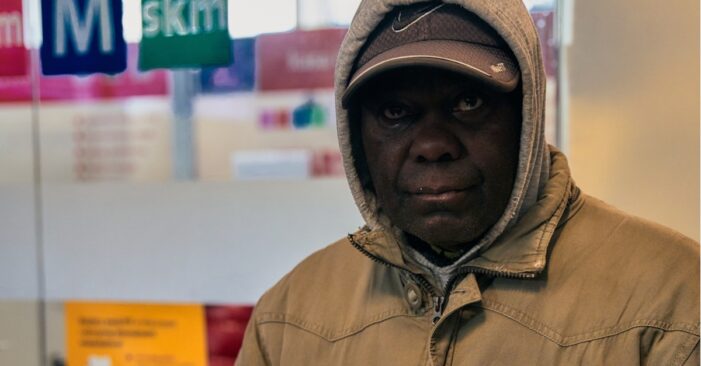 Alexander Somto Orah, 25, was among thousands of people crowding a Kyiv train station Friday, hoping to flee Ukraine amid the Russian invasion. He said he and his friends hoped to get to safety at the Polish border quickly but that officials wouldn’t allow the group of Africans to board trains out of the region.

“I was like, ‘You are picking only white people!’” Orah said. He said he and his friends briefly made it onto a second train headed to Poland but were quickly kicked off, with officials telling them “Ukrainians only.”

“I said: ‘You say Ukrainians only, but I don’t see you checking passports. I see you picking white people only.’ The train was not filled before they left, but they never picked us.”

Africans in Ukraine say they are either being turned back at the border or face longer delays and hostile treatment as they try to seek safety.
Several people shared their stories with @simplyzinhle. #MorningNewsNOWhttps://t.co/U4UZMHn7bF pic.twitter.com/9AuqLmKpN1

Orah is one of several African citizens living in Ukraine who have reported racist discrimination and abuse at the border. Videos on social media have shown officials appearing to threaten to shoot groups of African students, a woman shielding an infant from the cold, officials chasing groups of people and people reported to be stranded in Ukraine. Representatives from several African countries — Nigeria, Ghana, Kenya and Gabon — have condemned the reports, and the African Union said Monday that it was disturbed by the news.

“Reports that Africans are singled out for unacceptable dissimilar treatment would be shockingly racist and in breach” of international law, African Union officials said in the statement.

Russia invaded Ukraine last week by land, air and sea following weeks of tension. Explosions have rocked the country, prompting thousands of residents to flee to nearby countries. The European Union recently announced measures to bolster Ukraine in its fight against Russia and imposed bans on Russian aircraft and state-owned media outlets. On Tuesday, an armored convoy made its way toward Kyiv, and a video showed a deadly explosion in Kharkiv, Ukraine’s second-largest city. The blast killed at least 10 people, said Anton Herashchenko, an adviser to the interior ministry.

Scholars have said that amid the invasion and humanitarian crisis, Black and brown people in Ukraine could find themselves at the bottom of the social hierarchy as they try to flee.

The United Nations has acknowledged the discrimination some non-Ukrainians have faced after reports surfaced that African citizens are enduring racism at the border. Filippo Grandi, the U.N. high commissioner for refugees, said at a news conference Tuesday that unfair treatment isn’t the result of state policies.

“There should be absolutely no discrimination between Ukrainians and non-Ukrainians, Europeans and non-Europeans. Everybody is fleeing from the same risks,” Grandi told reporters.

Orah detailed his and his friends’ harrowing journey to the Polish border. They tried to get on train after train out of Kyiv and were able to board one only after they begged.

“The train was already leaving, we jumped in and was holding the door and told them, ‘You either open the door or we die on the road,’” Orah recalled of a Ukrainian official. “He finally opened the door. We were the only three Africans in that particular train. And the train was not full.”

Several African students and other foreigners told CNN that they were ordered off buses to make room for Ukrainian nationals, left stranded in border towns and beaten.

While the official count of African and Black people in Ukraine has not been updated in 20 years, Reuters reported that there are more than 16,000 African students in Ukraine, citing the education ministry. As of 2020, Moroccan, Nigerian and Egyptian citizens made up nearly 20 percent of all students in Ukraine.

The Foreign Affairs Ministry called on relevant agencies to support foreign citizens but appeared to dismiss the reports of discrimination as Russian propaganda. Dmytro Kuleba, Ukraine’s minister of foreign affairs, tweeted Tuesday that Africans needed to evacuate the country safely.

Russia’s invasion of Ukraine has affected Ukrainians and non-citizens in many devastating ways. Africans seeking evacuation are our friends and need to have equal opportunities to return to their home countries safely. Ukraine’s government spares no effort to solve the problem.

“However, do not be misled by Russian disinformation,” the statement read. “There is no discrimination based on the race or nationality including when it comes to the crossing of the state border by foreign citizens. The first-come, first-served approach applied to all nationalities.”

MSNBC terrorism analyst Malcolm Nance said both could be true: Discrimination is likely to be occurring and Russian officials may be working to use the news to their advantage.

“Where you’re going to see discrimination is always in a crisis. You can’t stop guys who might be racist inherently from doing something,” Nance said. “This is reflective of the social politics of Ukraine — which is a 99.9 percent white country — in a crisis. This story got amplified by Russia. It’s in the interest of Russia to stoke these perceptions.”

Orah said that after they reached Lviv, he and his friends weren’t able to board another train, so they paid for a taxi to reach the border. However, the car was stopped because of traffic, so the trio continued to the Ukraine-Poland border crossing in Medyka on foot.

There, Ukrainian officials were holding groups of people back with a barricade, he said.

“We were trying to break through. We were pushing, pushing,” defying Ukrainian officials’ orders, Orah said. “They were chasing us with batons. We didn’t care. We were pushing forward, running, and we walked for, like, 30 minutes until we got to the Polish border.”