Opinion: Making the Case for Latinos in the Adams Administration 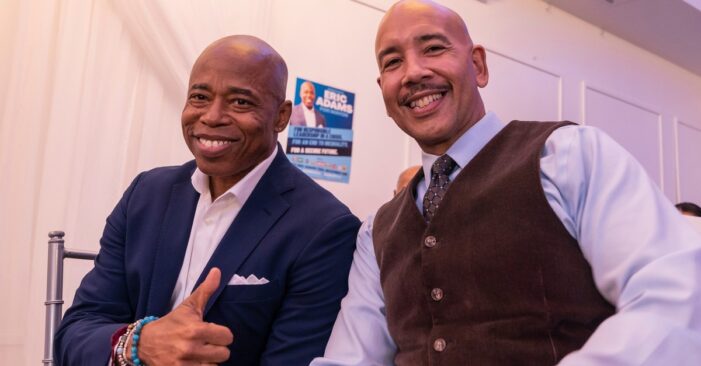 By City and State NY

Every year at the SOMOS conference, leaders from across New York come together to exchange ideas about the challenges Latinos face and explore solutions. Coming on the heels of the conference earlier this month, and as we prepare for the start of a new New York City mayoral administration, we are reminded that Latinos must unite to raise our voices and exert our power to increase our representation in leadership positions across government.

New York City has a new mayor-elect. Eric Adams will be the second of only two Black men among 110 men to be elected mayor of our city. We congratulate him on his victory, stand ready to support him and urge him to seize this critical opportunity to lift up the Latino community. A new administration always has the potential to bring new opportunities; hope for overcoming the challenges that impact so many New Yorkers and the promise of new possibilities for all communities. However, this impending transition is different.

The last two years have unequivocally and universally changed “normality” for everybody. They also exacerbated and heightened pre-existing disparities among New Yorkers. With the advent of COVID-19, there were those who could “shelter in place” (whether in New York City or elsewhere), working from home relatively safely. Still there were others who had to continue exposing themselves on a daily basis because their jobs were suddenly deemed “essential.” They didn’t have the option of continuing to earn an income in the safety of their homes. Their jobs were considered essential for the survival of the city.

Not coincidentally, a large number of essential workers are disproportionately Black and Latinos, as well as immigrants and women. In New York City, frontline workers represent approximately 25% of the overall workforce, yet 75% of frontline workers are Black and Latino, and over 60% women. They are our under-employed; making the lowest wages and often lacking access to adequate healthcare.

As Latino leaders representing a cross-segment of sectors in the city, we urge Mayor-elect Adams and his transition team to seize the opportunity to transform the city’s leadership to reflect its demographics and prioritize identifying qualified Latina and Latino leaders to champion the interests and needs of our communities. These leaders should hold senior positions in the executive cabinet, overseeing agencies and initiatives that are central to the opportunity, well-being and dignity that Latinos, and all New Yorkers, deserve. Latinos should be meaningfully represented in the next administration, with a critical voice, as well as the direct power to support transforming New York City into the equitable and just city we all believe is possible.

According to the 2020 U.S. Census, Hispanics make up nearly 30% of the city’s population, the second largest group behind whites. Population changes between 2010-2020 also showed that four of the city’s boroughs, percentage wise, grew to have more Hispanics than the current statewide total of 19.5%. The Bronx has the highest with 54.8%, followed by Queens, Manhattan and Staten Island with 27.8%, 23.8%, and 19.6% respectively. Brooklyn slightly trails the state with 18.9%.

The power of these numbers is showing up at the polls. In 2022, the City Council will have 14 of 51 members who are of Hispanic background. More notably there will be ten Latinas among them. At the same time, Latinos were a key constituent in helping Mayor-elect Adam’s win the Democratic primary, especially in the Bronx where Adams garnered over 50% of the votes.

Latinos are integral to New York City’s recovery. They are politically engaged. Yet they are still underrepresented in city government, particularly in leadership roles. The late Angelo Falcon in his role as president of the National Institute for Latino Policy kept monitoring data on this issue. It’s long past time for Latinos to be represented in every sector of city government. Adams’ transition team and future administration must ensure that Latinos are appointed and hired to a proportionate number of positions at all levels of his administration as deputy mayors, commissioners, chancellor of schools and the NYPD chief of department, to name a few.

“Representation matters and few places is that axiom truer than in government. Citizens should be able to look at the government and see people who look like them, have similar life experiences, and hail from the neighborhoods they call home.” wrote the Hispanic Federation in its recent La Gran Manzana 2021 NYC Policy Blueprint for the incoming mayor and City Council.

The intersection of multiple crises over the past two years have presented extraordinary challenges for our communities. The election of a new mayor presents an equally unprecedented opportunity; to do differently, to do better. Not by building on the status quo, but by partnering with communities most in need, creating a new paradigm of leadership and transforming the way we work together to address the needs of New Yorkers. In that way, together we can confront the challenges, inequities and disparities that have burdened our communities for so long. Because we believe that together – truly together – we can finally live up to the rhetoric of being the greatest city in the world.