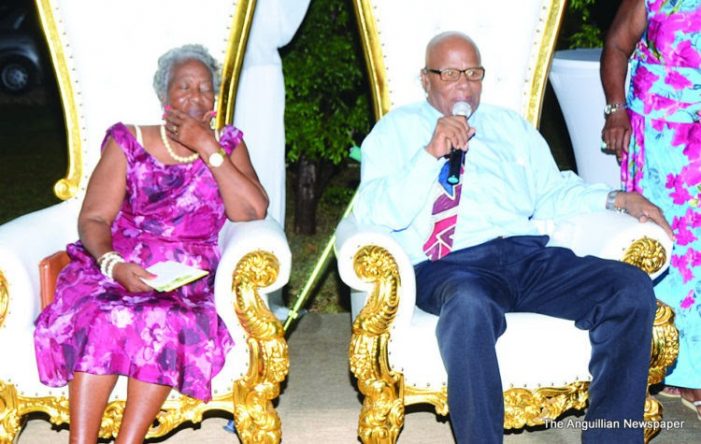 Pictured above are the Honourable Hubert Benjamin Hughes and his beloved wife, Mrs. Norma Hughes. On his 87th birthday, the Government and people of Anguilla celebrated his life and legacy with a road naming ceremony and thanksgiving service in South Hill (Photo Credit: The Anguillian Newspaper).

“Former Chief Minister Hughes was an amiable personality, full of life, a patriot of Anguilla and deeply, passionately connected to the country and people of St. Kitts-Nevis,” Prime Minister Harris said yesterday, Friday, May 7th, 2021.

Speeches, songs and other public expressions of honour and appreciation for the three-time Chief Minister of Anguilla followed during a Thanksgiving Service at the Community Field in South Hill.  Seated by the Honourable Hubert Benjamin Hughes’ side was his beloved wife, Teacher Norma.  Mrs. Hughes was also honoured for her 20-plus years of public service as an educator.

“The Honourable Hubert Benjamin Hughes led a full, impactful life that was rich in experience, friendship, leadership, love and service, and his legacy will forever be linked to his formative influence on Anguilla’s political and socioeconomic development leading into the 21st century and beyond,” Prime Minister Dr. the Honourable Timothy Harris also said.