The Fenty Beauty founder completed the look with some large silver hoops, gold chain necklaces, and a green snakeskin bag. 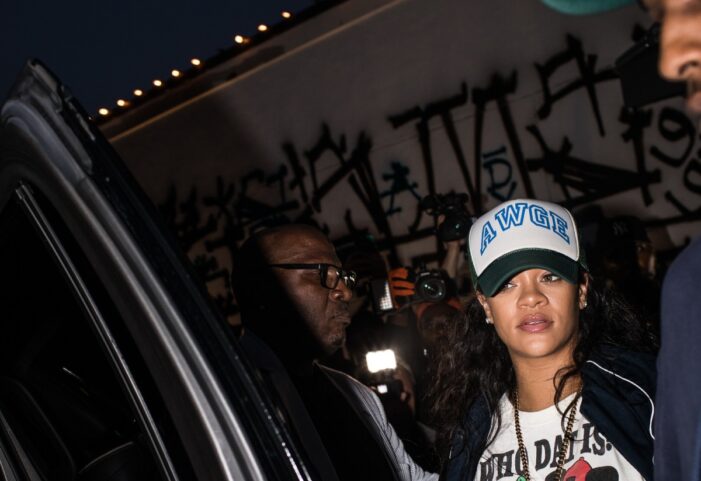 Rihanna and A$AP Rocky were spotted leaving a late-night meeting in New York City Friday, and both were dressed to impress.

The new parents stepped out in casual style, with Rihanna, 34, sporting a graphic tee shirt featuring the album art for rapper RZA’s album Birth of a Prince.

She paired the tee with a micro mini denim skirt, and let her boots do the talking. The dramatic pair of thigh-high boots covered nearly her entire leg, with a tapered style that led to a pointed toe.

The Fenty Beauty founder completed the look with some large silver hoops, gold chain necklaces, a green snakeskin bag and a bold red lip, hiding behind a pair of black sunglasses. Her super-long black hair was up in two pigtails.

Rocky, 33, was seen wearing his signature purple Los Angeles Lakers hat, a colorful graphic tee under a brown plaid button-down, and a comfy pair of jeans and sneakers. The rapper also wore a silver chain necklace. Both artists were all smiles on their night out.

The pair welcomed their first child together, a baby boy, in May. The proud parents have yet to publicly announce their son’s name. A source close to the couple told PEOPLE that the “Diamonds” singer and Rocky were “doing great” as they take on their new roles as parents.

“Being a new parent is of course an adjustment, but they are doing great. Their baby boy is healthy and Rihanna is just in awe of him,” the source said shortly after the baby’s birth. “She really was so excited to be pregnant. She loved it. Meeting her son was of course extremely special too.”

“Rihanna barely leaves his side. She is a fantastic mom,” the insider continued. “She wanted to give birth in L.A. since she has a big house with a yard. She enjoys sitting outside with her baby.”

Just months after welcoming her first child, Rihanna celebrated yet another milestone: being the youngest billionaire on Forbes’ list of the richest self-made women in the country.