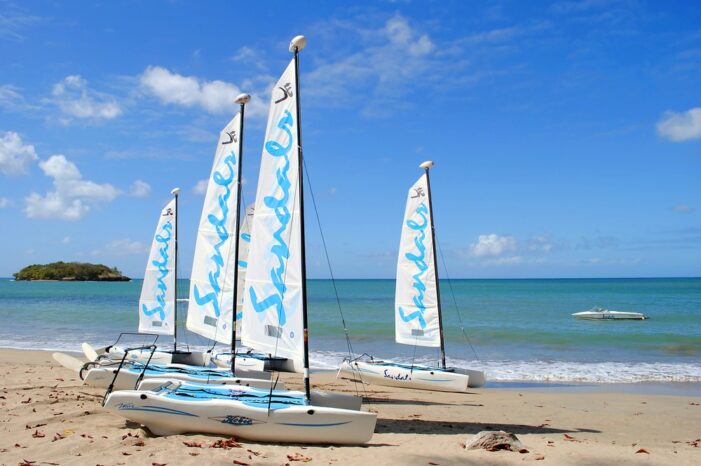 Halcyon Beach in St Lucia in the Eastern Caribbean Sea, Part of the Lesser Antilles. JANUARY 28 2012. Catamarans on the silver white sand beach for a tropical vacation at Sandals Luxury Hotel. (Shutterstock)

For years sea turtles have graced ocean waters, playing a critical role in the balance of marine habitats. However human behavior such as unchecked poaching of turtles for their eggs, meat and shells, along with over-exploitation, have endangered the survival of these sea animals.

In line with a commitment to raise awareness regarding environmental protection, Sandals Regency La Toc Golf Resort and Spa in collaboration with the Ministry of Agriculture, Fisheries, Food Security and Rural Development recently undertook a Sea Turtle Seminar.

The seminar allowed team members to receive training in sustainable marine life management and protection practices. Upon completion of the seminar, participants were able to identify all four turtle species that nest on Saint Lucia’s shores as well as acceptable practices when interacting with the species.

Marine Biologist in the Department of Fisheries, Yvonne Edwin highlighting the importance of such trainings, stated that it is paramount for individuals to understand the lives of sea turtles, their nesting periods and the do’s and don’ts when interacting with them.

Sandals Regency La Toc Golf Resort and Spa’s Environment Health and Safety Manager Rodesha Reid indicated that Sandals remains cognizant of the importance of marine life not only as a vital part of the ecosystem, but also the way it impacts Saint Lucia’s Tourism Industry.

She explained, “Guests and team members alike have had the distinct pleasure of witnessing turtles coming ashore to nest, as well as hatchlings Rodesha Reid – EHS Manager Yvonne Edwin – Marine Biologist making their way into the ocean. The cycle of life is no doubt a beautiful thing and Sandals Regency La Toc Golf Resort and Spa is committed to playing its part, to ensure the preservation of the species for generations to come.”