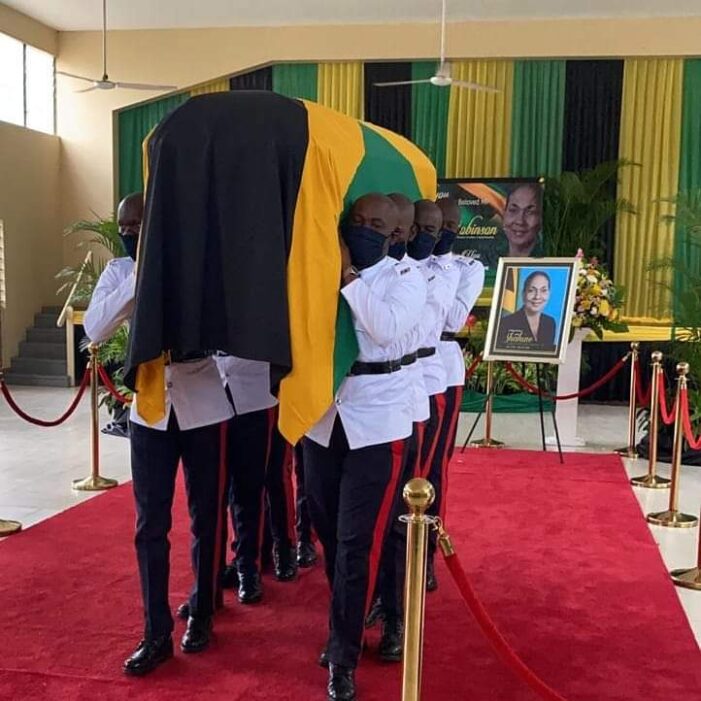 The late Minister of Labour and Social Security, Hon. Shahine Robinson, was remembered as an inspirational and exemplary leader who did good for others, during her official funeral on Monday (July 4).

The inurnment ceremony was held at the St. Matthew’s Anglican Church in Claremont, St. Ann for Mrs. Robinson who died on May 29, 2020, at the age of 66 after a prolonged illness.

Prime Minister, the Most Hon. Andrew Holness, led members of Government, who joined family, friends and scores of well-wishers, in celebrating the life of Mrs. Robinson.

Also paying their respects were Minister without Portfolio in the Ministry of Economic Growth and Job Creation, Hon. Everald Warmington; Minister of Local Government and Rural Development, Hon. Desmond McKenzie; Minister of Science, Energy and Technology, the Hon. Daryl Vaz; Member of Parliament for St. Ann South East, Lisa Hanna, who represented the Opposition Leader, Mark Golding, and others.

“As I reflected, a story found in the New Testament scriptures came to mind and heart. It is the story of a woman, Dorcas, of whom the message of Acts 9: 36 – 43 tells us, was a woman who was well known for doing good and helping out. You would appreciate why similarities between Dorcas’ life and Shahine’s have found resonance with me,” she explained.

“The fact is, both women were not only highly esteemed by their constituents but also by the people they helped out and to whomever they did good,” she added.

Mrs. Robinson came to national prominence in 2001 after having won a by-election for the Jamaica Labour Party (JLP).

She was a highly respected and diligent parliamentarian who had a distinguished career in public service for 19 years.

From 2016 until the time of her death, Mrs. Robinson served as Labour Minister.