St Vincent Is Burning: Time for the World to Step Up 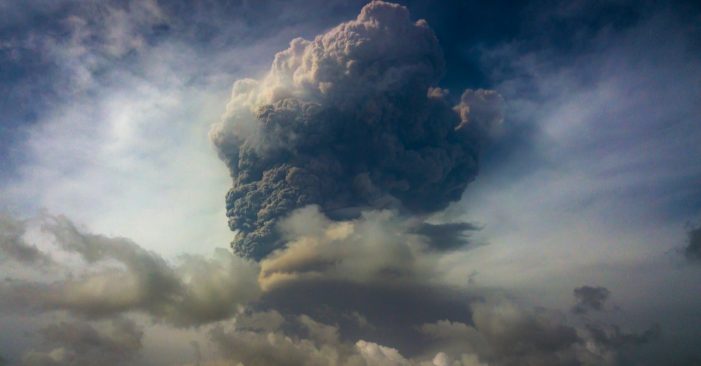 Growing up in one of the villages now classified as a high hazard zone, Chateaubelair (Chateau), on the island of St. Vincent and the Grenadines (SVG), La Soufrière or known by locals as Soufrière or “Soufray,” was always a towering yet “gentle giant,” majestic and unbothered outside my window. I no longer live in St Vincent but hearing about the eruption of Soufriere was a shock to both the Diaspora and residents. And even if the volcano was your view daily—as it was mine—an eruption was honestly in the fringes of most people’s minds.

After all, decades have passed since it has last shown its strength, erupting last in 1979. However, when it started to erupt effusively back in December of 2020, Vincentians were doubtful that it would be explosive. It is now being compared to the worst eruption in St Vincent’s history in 1902 when as many as 1,600 people were killed. The St. Vincent and the Grenadines National Emergency Management Organization called the scene a “battle zone.”Thankfully, there have been no reports of anyone being killed or injured. Before the eruption began, the government ordered people to evacuate the most high-risk area around the 4,003-foot (1,220-meter) volcano after scientists warned that magma was moving close to the surface.

Images shot by the UWI Seismic Research Centre show gray scenes that resemble images from the moon, not a tropical island usually considered a vacation paradise. Prime Minister Ralph Gonsalves said water supplies to most of the island had been cut off and its airspace is closed because of the smoke and thick plumes of volcanic ash moving through the atmosphere. “Agriculture will be badly affected, and we may have some loss of animals, and we will have to do repairs to houses. But if we have life and we have strength — we will build it back better, stronger, together,” he said.

Well indeed, on April 9, La Soufrière exploded back to life. April 9 was a day filled with trepidation because the questions loomed if residents were genuinely ready, even with a four-month alert, starting with effusive eruptions before its big explosion. As I heard of the news, I called my relatives back on the island, and as I spoke with the youngest of my aunts, she said, “Kishon, I am emotional because it brought back bad memories from 1979.” She reminisced that they were displaced then, and she knew that this would be the same fate for many residents who had to be evacuated. Aunty Rudy expressed her grief: seeing the elderly transferred from their homes, knowing that they had to leave their comfortable beds, showers, and kitchens, for makeshift shelters—schools, churches, or community centers—away from the hazard zones to seek refuge; possibly to a location that doesn’t even have sufficient cots or beds to house them. Another relative questioned the structural fitness of shelters, the schools particularly, to safely house evacuees. My cousin Catoya pointed out that the schools had metal or wooden window louvers, which are unfit to completely block ash, one of the most dominant substances expelled from the volcanic eruptions of La Soufriere.

It’s been a few days now, and Aunty Rudy is working along with my organization Young Black Travelers and the United Vincie Cultural Group of Brooklyn as we raise funds for the dislocated residents of St. Vincent and the Grenadines. After a recent phone conversation with her, she expressed how heartbroken she was and indicated that the shelter residents were highly vulnerable. Aunty Rudy pointed out a particular case of an elderly lady crying uncontrollably, without apparent cause, but she said it was because the lady was displaced after assessing the situation. Aunty Rudy noted that she is concerned about the mental impacts the eruption will have on Vincentians. She also pointed out that the staff at her shelter is doing their very best to make residents as comfortable as possible. She also articulated that residents felt deprived since they now have to line up for everything. Their most basic freedom of independence has been stripped away as a result of La Soufriere’s eruption. Some are even afraid to ask for their most basic needs because, after all, Vincentians are a very independent and hardworking group of people.

Furthermore, the uncertainty of not knowing when it will end—as eruptions are predicted to persist for weeks and even months—is unsettling. Two of my aunts who reside in New York also reminisce on their experiences from 1979. They tell the story of how the eruptions lasted for months and months. They were away from Chateaubelair for an extended period. It was the 1979 eruptions that caused the two of them to relocate from Chateau to Campdempark, a safe zone now, as it was also considered back then.

However, as the eruptions persist, and we use history and the images we have seen—of villages in the north that are now enveloped in ash—as a measure and comparison of La Soufriere’s impact, we cannot deny that La Soufriere is a wonder that disrupts. The ash that has fallen is a nuisance that the government of St. Vincent and the Grenadines and the international community will have to remedy significantly since eruptions negatively impact both health and the environment. We know that they all have a long road ahead of them. And when this is no longer world news, many of them will return to their villages to uncover houses with collapsed roofs, as well as livestock and agriculture that has been decimated.

From thousands of miles away, I keep a watch on St Vincent and keep hope alive. I hear from relatives and friends how dire the situation on the ground is. It breaks my heart seeing pictures of submerged villages and hearing reports from shelter managers of the state of need, especially water and basic supplies. Hearing from individuals who experienced the 1979 eruption, SVG is now in an even greater state of emergency than they were then. In this increasingly globalized world, we must bring urgency to global leaders to ensure that they do their part to ensure that the small island state of St. Vincent and the Grenadines rebound stronger than before. I must also bring the plea home to the government of the United States to do more. Temporary Protected Status—formally known as TPS—is a remedy.

Simply put, St. Vincent is not in the position to accept many of its people who live and work here without documentation. If they return to SVG today, it is almost a guarantee that they will face extremely harsh conditions and possibly cause so many more to struggle even more than they currently are. SVG is experiencing a humanitarian crisis. The Biden Administration the people of St Vincent both here in the US and back home.

Nevertheless, let’s pray that the day comes soon when Soufrière will again return to its state of slumber. And hopefully this time, for decades on end.