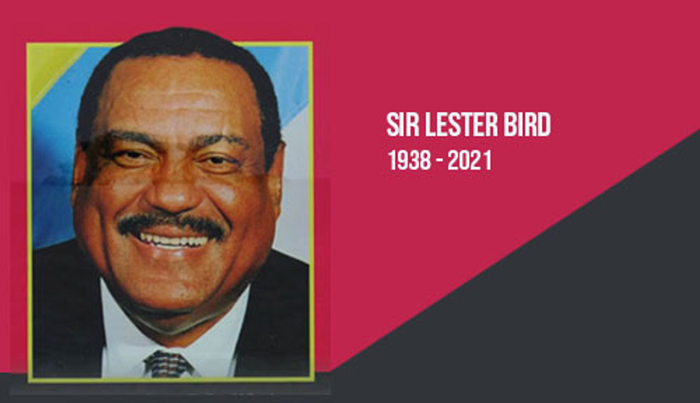 The name Lester Bryant Bird will forever feature prominently in the annals of Antigua and Barbuda and the Caribbean’s history. He will long be revered as an architect of the post-colonial development of Antigua and Barbuda. Our nation, and the people of the Caribbean have lost a stalwart and visionary with the passing of Sir Lester Bird, athlete, and beloved statesman.

Sir Lester who was first elected to parliament in 1976 served as Antigua & Barbuda’s second Prime Minister for a decade beginning in 1994. On behalf of the staff at the Ministry of Tourism and Investment as well as The Antigua & Barbuda Tourism Authority along with the entire tourism fraternity, I offer sincere condolences to the former Prime Minister’s immediate and extended family and to the people of Antigua and Barbuda.

From 1976-1989, Sir Lester served as Minister of Economic Development, Trade, Energy and most notably Tourism during a long and distinguished political career.

I had the privilege of witnessing the former Prime Minister’s dedication to the region, as validated by his work as chairman of the Organization of Eastern Caribbean States (OECS) and more importantly, to the people of Antigua and Barbuda. It was Sir Lester’s vision and his leadership that, as our sugar industry waned, laid the foundation for the development of our tourism industry. His vision ultimately provided employment and positively changing the quality of life for so many in our society. An extraordinary public servant who cared genuinely about people, it was under his leadership, in his capacity as Prime Minister, that an ombudsman was appointed to deal with the complaints of citizens. A series of foreign direct infrastructural investments in Tourism during the 1980’s and 90’s, led by Sir Lester, created an economic boom, making Antigua and Barbuda a mecca of prosperity which attracted thousands of our Caribbean neighbors to share in this growth.

In his long and distinguished career, Sir Lester will be remembered for his negotiating skills as he championed tourism partnerships from which the industry has benefitted, including the construction of the Royal Antiguan hotel, the expansion of the industry to include cruise tourism, the building of the Heritage Quay and Nevis Street cruise piers and the development of the Heritage Quay shopping center which was a game changer for our cruise industry.

In 2014, Sir Lester was conferred with Antigua & Barbuda’s highest honor, a Knight of the Most Exalted Order of National Hero (KNH), for his contribution to national development as an outstanding sportsman, lawyer and parliamentarian for 38 years. Our tourism industry has benefitted significantly from his governance. To continue to build on that strong foundation and enduring legacy that he has left us, is a most fitting tribute to this colossus of a Caribbean stateman and true National hero of Antigua and Barbuda. May his soul rest in peace.