The BA.2 Variant Gains Ground: Are we Heading Back to the Future? 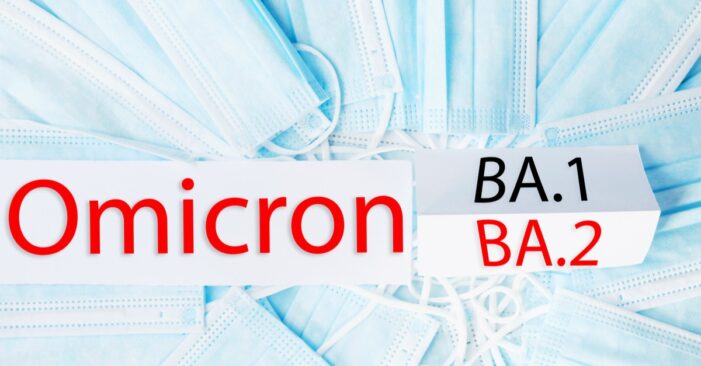 New Coronavirus infections remain low. However, the newly identified BA 2 variant accounts for half of new COVID infections in New York. On February 10, New York Governor Kathy Hochul lifted the statewide indoor mask mandate. New York’s Mayor, Eric Adams, on March 7, raised the ruling on wearing masks in school. With this new variant, New Yorkers are getting anxious to know the health protocols and answers to the question about what to expect.

Four medical experts gathered to address some of these questions and more. Extracts from the discussions addressed some of the frequently asked questions by New Yorkers. They are concerned about those most at risk, children’s impact, and the need for masks and booster shots. The Associate Editor at Ethnic Media Services, Sunita Sohrabji, led the panel of discussants to address the issues.

The Origin of the New BA.2 Coronavirus Variant
Dr. Ben Newman, chairman of the biology department at A&M University, Texas, revealed that the variant is a mutation. Like Omicron, it comes from an individual who did not or could not take the vaccine. He also explained that there would likely be mutations and variants. “I think the most important place that BA.2 and Omicron came from is from a person, and it’s most likely a person who either couldn’t or didn’t have a vaccine. And as the virus grows, it changes,” said Dr. Newman.

Which is More Infectious – BA.2 vs. Omicron and Delta?
As an expert in virology, Dr. Newman explained that while the Delta variant was dangerous, it has gone extinct. The new variant is a mutation from Omicron. However, the primary concern is that the BA.2 variant often affects people who are already vaccinated. According to Dr. Newman, “These viruses can spread to people already with some immunity. And that’s the concern. These represent a possibility of repeated exposure and other bad things happening even when people have taken some of the right precautions. Omicron is not our friend. It’s not anyone’s friend. And it’s something that we need to get rid of as quickly as possible as a virologist.”

He affirmed that the BA.2 variant is the new wave that hit Hong Kong and China, with surges across Europe. The Omicron and BA variants have created a lot of concerns about the effectiveness of the vaccines. However, he reveals that “Biology has thankfully simplified the picture because now there are only omicron-like-viruses, pointing to a clear path forward. Making more omicron-like vaccines more effective as other strains become extinct.”

Dr. Newman also stated that he believed Dr. Anthony Fauci’s statement that the US escaped the impact of the new wave compared to the UK and Europe. However, he quickly explained that the virus seems to have lost its sting, which raises a new concern. “But I think the problem with dealing with this is complacency. The immunity that we build to exposures or vaccines is temporary. It has a window. But you cannot tell from looking at a person whether they will be protected against this variant or the following,” he emphasized.

Experts are hopeful that the protection from whatever means will stand up against the new variants as time goes on. “That’s just natural selection,” says Dr. Newman. “It’s a powerful way of finding solutions to problems. And the virus is changing because our efforts are forcing it to change. There is a lot of progress, but we are not yet done.”

Most at Risk Population for Infection, Hospitalization, and Death
According to Dr. Dali Fan, Health Sciences Clinical Professor at the University of California Davis, cases of hospitalized patients have remained low. As of April 2022, the CDC confirmed that BA.2 variant remains the most dominant strain, but the cases of patients on admission remain low. “We had nine patients admitted to the hospital for COVID; a few months ago, our peak was 142,” he said.

Addressing the most vulnerable, he explained three categories among the general adult population- the vaccinated (who need a booster), the unvaccinated (they are the most susceptible), and the generally vulnerable.

Dr. Manisha Newaskar from the Pediatric Pulmonologist at Stanford Children’s Health says that cases of hospitalized children have remained low like the general population. “We can see a decline in patients getting hospitalized in the last few weeks. The hospitalizations are not to the extent that we were seeing back in January, February,” she said.

Dr. Newaskar also addressed the issue of vulnerability. She explained that the unvaccinated remain most at risk. “So, in the previous surges, it was obvious, especially in a pediatric population, that unvaccinated children were more at a higher risk of getting hospitalized than vaccinated.” However, children with compromised immunity also remain a significant concern.
“Among children who are immunocompromised, undergoing cancer chemotherapy or have some other diseases where they can’t mount an immune response, obesity, uncontrolled asthma. Those are the population I am always worried about because, over time, we have seen that these are the most hit patients.”

She reiterated that as COVID is becoming endemic and there are new waves, people must aim to protect their families, themselves, and the community by getting vaccinated.

Hospitalization Among Latinos
Estimated data shows that the health disparities recorded at the beginning of the pandemic have remained over the past two years. In some states, data show that Latinos account for 47% of hospitalizations and 43% of deaths from COVID 19 compared to statistics on non-Latinos.

Dr. Daniel Turner-Lloveras, the co-founder of the Latino Coalition Against COVID 19, says, “Similar disparities exist in vaccinations in the state. Only 64% of Latinos have received at least one COVID vaccine dose, compared with 74% of the non-Latino white population.” A scenario that he says has remained the same since the beginning of the pandemic. “We are still looking at the same disparities that we looked at right from the beginning of this pandemic,” said Dr. Turner-Lloveras.

Data indicates that Latinos in California were grossly affected by COVID 19. Their occupation on the front line is associated with a higher risk of infection through more frequent exposure to the virus. They also live in overcrowded housing unsuitable for proper quarantine isolation and lack access to health care.

As a volunteer physician with detained immigrants who refused the vaccine, he explained that the project established the reasons behind the refusals. He explained, “It was because they had no one to ask questions. We’ve seen that about 70% of the time when a person does not trust the vaccine, they only understand the value if they have access and have a conversation with a provider they trust. They can conclude that this is in their best interest.”

Importance of Getting a Booster for the Over 50
Experts recommend getting a second booster because it increases protection. According to Dr. Dali Fah, “If you are 50 to 64 with multiple underlying conditions or frequent occupational exposure, go for a booster, and you are eligible for it. I think it’s an excellent idea to curb the BA.2 variant.”

Dr. Turner-Lloveras shares the same sentiment, “I don’t think the data is out for younger populations under 50. The data is not as clear. But if you’re over 60 or at high risk for whatever reason, I think it’s in your best interest to receive the vaccine,” he says.

Furthermore, the clamor for yearly boosters based on findings from Mayo Clinic was addressed. Results showed that the efficacy of the vaccine shots by Pfizer and Moderna dropped after a period, and a booster is required to maintain immunity. Dr. Newman explained that the focus should be on controlling the virus rather than how much immunity people have.” We have got to a state where most people have some immunities. So, yeah, immunity is not perfect at all. Even though a lot of people would like it to be.”

Presently, the virus keeps mutating, and scientists are still studying the whole pattern, which is of great concern. “It is challenging to do an accurate risk assessment on a constantly changing virus. It is not changing randomly but changing in a way that makes it more difficult to stop. And that has been very much the case so far,” says Dr. Newman.

Reinstating Mask Mandate in K-12 Schools, Especially Among Children Under 5
Speaking as both a parent and a professional, Dr. Newaskar acknowledged that while the children are relieved that they can stop wearing masks, they also know that the pandemic is not over and realizes that they can go back to wearing masks as a form of protection. “I have two boys, and they are finally relieved somehow. However, I think the kids these days are also very cautious, and they have learned what we all have learned through this pandemic: that we need to be flexible.”

Dr. Newaskar confirms that we are not out of the woods. However, as a society, we are better positioned over the virus than in the past. “These waves will come and go. However, we are in a good spot because many people are vaccinated, and many people have also had natural immunity from the infections.”

However, with the mask mandate, she explains that other authorities have a broader view to inform the decision. “These mask mandates may change. And we must be flexible. I would look at authorities looking at the data and figuring out whether it is better to wear a mask. And I would follow that.”

She advises that they must be cautious for more susceptible children.” If you feel like you have a condition that makes you more susceptible, you should wear it. You should still take precautions,” she said.