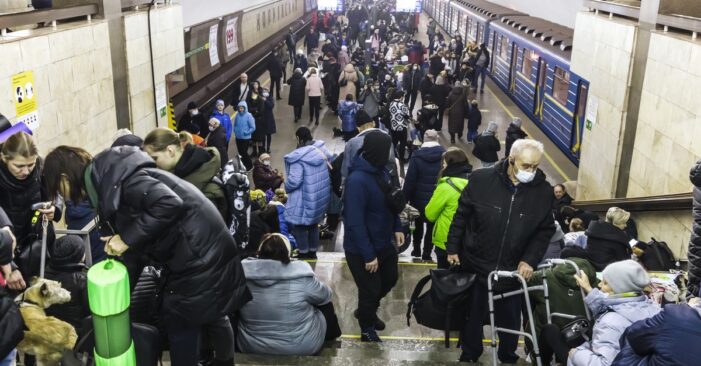 War of Russia against Ukraine. Subway station serves as a shelter for thousands of people during a rocket and bomb attack. Kyiv, Ukraine – Feb. 25, 2022 (Shutterstock)

The invasion by the Russian Federation of the sovereign state of Ukraine has been roundly condemned by most countries of the world.

However, Venezuelan President, Nicolas Maduro, announced his support of it. Had president Maduro stopped short at his statement that: “We repudiate and reject all plans to surround Russia militarily and strategically. Russia has to be respected as all the peoples of the world have to be respected”, that would have been, at least, understood to be ideological and strategic support in his government’s interest. But, by swiftly and unequivocally supporting the Russian invasion of Ukraine, which is a clear violation of the basic tenets of the UN Charter and international law, president Maduro raises questions.

It is to be hoped that the Venezuelan government does not regard the Russian aggression against Ukraine – in violation of Article 2, paragraph 4 of the United Nations Charter – as encouragement for similar action against its neighbours.

In this connection, the Caribbean Community (CARICOM) countries were right to issue a statement in the immediate aftermath of the Russian invasion of Ukraine that the “hostilities against Ukraine go counter to the principles of respect for sovereignty, territorial integrity, and the prohibition on the threat or use of force, and the peaceful resolution of disputes, which are the bedrock of this Community”. All countries should understand that CARICOM countries are small states that depend on the rule of international law, including the illegality of aggression and the prohibition of the threat or use of force in disputes.

At the time of writing, both the United Nations and the Organization of American States (OAS) are working on issuing strong resolutions, condemning not only the Russian invasion of Ukraine, but also the earlier recognition, on February 21, by the Russian government of two provinces of Ukraine – Donetsk and Luhansk – regions of Ukraine as a violation of the territorial integrity and sovereignty of Ukraine and inconsistent with the principles of the Charter of the United Nations.

When this crisis began to loom, there was, in some Caribbean circles, the view that countries of the region should stay-out of “the white boys war”. However, as I have argued in previous commentaries, any march by the Russian government into Ukraine and any attempt to annex parts of it by recognition of break-away regions within it, would have grave repercussions for the world, including the Caribbean.

First, it would embolden governments with contentions with their neighbours, territorial and otherwise, to act in a similar fashion. The consequence would be to create hostilities and instability in almost every region of the world. Second, Ukraine is the breadbasket of Europe. Disruption of its food production and supply would cause not only food shortages but also an increase in the cost of food globally as Europe seeks other sources of supply. Third, oil and gas prices would increase as action is taken against Russia by stopping its sales of oil to Europe. Europe, too, would have to buy oil in the same markets as Caribbean countries, forcing up prices at a time when the region is barely beginning to recover from the adverse effects of the COVID-19 pandemic. No sector would be spared and especially affected would be tourism, the supply of energy and water, and food production.

The US has tried and failed to convince large oil producers, such as Saudi Arabia, to pump more oil to cater for Europe’s needs. But long before the hostilities in Ukraine, Russia had already tied up a deal with member states of the Organization of the Petroleum Exporting Countries (OPEC) not to increase oil production in order to keep prices at a high level.

What was happening in Ukraine was, therefore, always a peril to the world community. The person who knew this best was UN Secretary-General, António Guterres. He told the UN special general assembly meeting on 23 February that “Our world is facing a moment of peril”, and even as the Russian government had already indicated its intention to launch a military offensive against Ukraine, he said: “If the conflict in Ukraine expands, the world could see a scale and severity of need unseen for many years”.

These circumstances now face the world. It is unlikely that the Russian Federation President, Vladimir Putin, will heed the urgings to stop the hostilities and withdraw troops from Ukraine immediately. It is also unlikely that even though it is a violation of international law and the UN Charter, that he will drop his recognition of Donetsk and Luhansk which are part of the Ukraine. He will regard these as bargaining chips with the member countries of the North Atlantic Treaty Organisation (NATO) and the European Union (EU).

This situation will therefore continue for some time while bargaining takes place both behind the scenes and in public. NATO and EU countries are not without leverage of their own. Apart from what British prime minister, Boris Johnson, called a “barrage” of sanctions, coming from the US, the EU and the UK, there are other ways in which Russia could be isolated. The sanctions on Russian oil companies and banks are already in place, putting pressure on Russia’s economy about which its own people will eventually complain.

In the meantime, the global community will pay a high price for Russia’s violation of the principles of international law that have, largely, underpinned peace and protected small states.

That’s why, CARICOM was right to speak out as it did. CARICOM leaders were safeguarding the interest of Caribbean people.