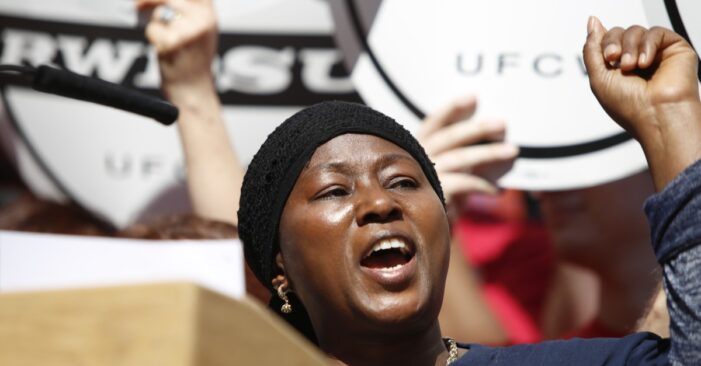 By Will Parker, Wall Street Journal

Apartment tenants are forming unions in an effort to gain leverage in landlord negotiations, a response to record-high rents and the recent expiration of eviction bans enacted during the Covid-19 pandemic.

Tenant unions, also known as associations, have been around for more than a century. They have been especially active in expensive cities with large renter populations such as San Francisco and New York. Now they are spreading in places like Akron, Ohio; Milwaukee, and the Maryland suburbs.

Hundreds of new tenant unions have been formed during the pandemic, estimated Katie Goldstein, director of housing campaigns for the Center for Popular Democracy. The progressive organization with 50 affiliate groups across the country is one of a handful of activist networks advising tenant unions.

Landlord trade organizations confirm there has been a sharp rise in new unions, though they noted that many of the groups have only a few members.

Tenant unions often start with letters to the landlord, asking for things like building improvements or a meeting to discuss evictions. They can escalate by holding public protests, contacting government officials or going on a rent strike, as did a tenant union organized in Queens, N.Y.

In the corporate world, labor unions are winning some new converts, including at two Starbucks Corp. stores in the Buffalo, N.Y., area, where the coffee chain’s employees have unionized for the first time. At an Amazon.com Inc. fulfillment center in Bessemer, Ala., workers will vote next month for the second time on unionizing.

A key difference from labor unions is that tenant associations in the private housing market have almost none of the legal recognition that organized labor does, which means tenant groups have much less bargaining power.

Some lawmakers in San Francisco, responding in part to tenant complaints, said they plan to consider this year a proposal to force city landlords to meet with tenant unions. The proposal would impose temporary rent reductions on landlords that fail to do so.

Some building owners are skeptical of these tenant organizations and laws that would empower them, worried that recognizing a union would give tenants the false impression that they can rewrite rent rules.

“We’re wary that the legislation will bring some misconceptions that things are on the table and up for negotiation that aren’t,” said Charley Goss, manager of government and community affairs at the San Francisco Apartment Association, a landlord trade group.

A number of tenant union calls to forgive all unpaid rent, for example, was “not something that’s productive,” Mr. Goss said.

Alicia Roberts spent years living at the Paradise Apartments in St. Petersburg, Fla. When Paradise sold to a new landlord in April, she expected a new stove. Instead, she missed a rent payment and got an eviction notice.

Not long after she was told to leave, she joined the St. Petersburg Tenants Union. The organization, which works with tenants across the city, pressed the new owner, then a local city councilman, to let Ms. Roberts stay. The group also made its case to local media at a press conference in front of Paradise. As a result of these efforts, Ms. Roberts said she got a new stove, her eviction was dropped, and she signed a one-year lease.

If it wasn’t for the union, Ms. Roberts said, “I’d probably be gone.”

Most unions are formed at individual properties, though organizers increasingly focus on uniting renters who live in different buildings and share the same landlord, an approach that they say emulates industrial trade unions.

In Akron, about a year ago, when a new company bought the city’s low-income Wilbeth Arlington Homes, residents said they faced rodent infestations, water damage and mold. Under the new owner, new problems cropped up, such as a lack of lighting in the parking lot that left some feeling unsafe at night, said LaTanya Tyes, a Wilbeth Arlington tenant who leads the apartment complex’s new tenant union.

Ms. Tyes said she has enlisted about 30% of her neighbors. After local press reported on some of the tenant union’s complaints, the building owner visited the property and presented an improvement plan to the local city council.

“The tenant union has helped shed light on the lack of open lines of communication between property management and tenants, which we believe has now been addressed and progress is being made,” he said.