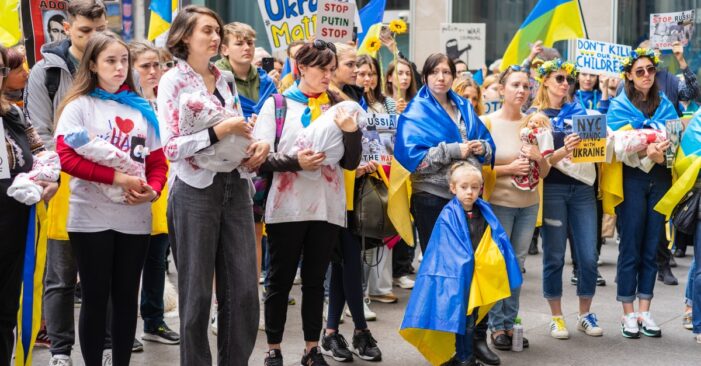 On the morning of Feb. 24, the day the Russian military launched a full-scale invasion of Ukraine, Iryna Plaskon and her husband Andriy jumped in their car with their two young daughters and drove from their hometown of Lviv in western Ukraine to the Polish border.

Four days later they landed in New York City. They were the first wave of what is expected to be tens of thousands of displaced Ukrainians arriving to the United States.

“You don’t know whether you’ll go back soon or if you’ll have to start a new life here,” said Iryna Plaskon, who now stays with her family in a basement Airbnb in Sunset Park.

In response to the growing displacement, members of New York’s Ukrainian community have mobilized, creating an ad hoc network of volunteers who are attempting to smooth passage for the new and expected arrivals. They are doing this by opening their homes, offering legal advice on immigration, and providing opportunities to earn cash by cooking meals and doing other odd jobs.

The new arrivals “have no friends, they have no relatives, they have no money, they have no right to work,” said Yuliya Zolotarevsky, a member of the Ukrainian community of Brooklyn. Zolotarevsky, who works at Brooklyn Public Library by day, has been inundated with offers of help from longtime residents since she wrote a post on social media. The response to that post inspired her to create a Facebook page, “New York Communities for Ukrainian Refugees.”

The site states, “We are not an organization with a Board of Trustees and Human Resources department, but rather a community for the people and by the people.”

The posts variously provide news updates – noting the Biden administration’s announcement this week to accept 100,000 Ukrainian refugees – as well as encouragement to community members to provide work to Ukrainians who have just arrived and are in urgent need of money and lack the legal ability to obtain jobs.

“You don’t know whether you’ll go back soon or if you’ll have to start a new life here.” – Iryna Plaskon

“Women can exchange their high-quality cleaning or Ukrainian borscht with meatballs and other delicious and healthy homemade dishes for something vital to them to meet basic human needs of food, shelter, seasonally-appropriate clothing, etc.” reads one post. “Maybe they can help you with your children, walk your dog, or plant flowers in your garden.”

“A woman, who has just arrived from Kyiv, needs clothes, top S, bottom M, shoes 6.5. Clothing for the Spring. Also, simple slippers, face cream and the rest,” while adding, “The men of her family remained to defend Ukraine.”

Another longtime resident of the community, Eugene Sakirski, arrived in the U.S. more than 30 years ago from Odessa and said he began to help organize volunteers and relief efforts as a way to fight depression about the war.

‘It gives you hope’

“My wife and I cried every day,” Sakirski said. “The moment I helped somebody cross the border [out of Ukraine], just by providing a contact, I got a little relief. As soon as you do something, it changes how you feel about things. It gives you hope!”

He helped create the site Direct Help for Ukraine with family members, and separately, reached out to Russian- and Ukrainian-speaking lawyers in the community via Facebook, urging them to provide legal assistance for new arrivals. That appeal resulted in an emerging legal support network of 23 attorneys, all of whom speak Russian or Ukrainian.

“He said, ‘You know what I need? I need a network of immigration attorneys who are willing to do pro bono legal service,’” said Luba Reife, who is deputy director for the Manhattan Family Law Project at Sanctuary for Families, a non-profit that aids victims of gender based violence. She said she and Sakirski had known one another for years and that he is “just connected to everyone.”

Reife and another attorney, Joy Ziegeweid, the supervising immigration attorney at the Urban Justice Center’s Domestic Violence Project, have since spent many late nights developing a web portal with legal information for new arrivals. Additionally, the network intends to offer live “Ask a Lawyer” sessions.

Although they anticipate the numbers will grow significantly, Sakirski and Zolotarevsky both estimated “a few hundred” Ukrainians had already arrived in New York since the invasion.

Gov. Kathy Hochul on Thursday announced the creation of a state website to offer a wide range of aid, from emotional and humanitarian assistance to immigration support. The site also includes information on how people can offer assistance.

Communities throughout Europe and the U.S. are doing the same.

Every forecast estimates the need as epic.

According to a United Nations refugee agency, some 3.72 million have fled Ukraine since the start of the war, including 2.2 million who crossed into Poland and 500,000 to Romania, in Europe’s worst refugee crisis since World War II.

Her husband of 30 years and their 28-year-old son remain in Ukraine, she said. Equipped with a tourist visa, she arrived alone in Brooklyn on March 3 and has since been sleeping on a childhood friend’s couch, while also cleaning homes and cooking for money.

She didn’t reveal how much money these jobs brought her.

“Enough to live,” she said, through an interpreter.

She spends much of her free time staying in touch with her family, telling them, she said, “that I love them very much.”

She describes her new life in the U.S. to them – “that I go to cook borscht, that I go to help clean up homes. What can I tell them? We’re reading the news together with them. We cry together.”

Periodically, she grows emotional at the situation, and figures she is suffering from post-traumatic stress disorder.

“It’s scary to end up in a situation like this where we don’t know what’s going to happen tomorrow,” she said. “Are you going to be alive? Will your closest people be alive? Your friends, your acquaintances?”

“Cities,” she said, “are being destroyed.”

The war has also made the 33-year-old Iryna Plaskon despondent, but she counts her family among the lucky ones. They crossed the border into Poland before the Ukrainian government issued an order prohibiting men between the age of 18 and 60 from leaving the country to defend it.

That allowed Andriy, 32, to remain with his wife and children. Equally important, she said, Andriy has an I.T. job with an American company and continues to earn a livelihood after moving to the U.S.

They found an Airbnb in Sunset Park after determining it was near a good school for Marta, their 5-year-old daughter. But the $4,000 monthly rent has given them sticker shock, given that by her estimate a nice apartment in their hometown would cost $150-200 a month.

Through Zolotarevsky, they connected with Victoria Barsky, an educator who teaches Russian literature at Brooklyn College and also works for the city Department of Education. Barsky encouraged them to visit one of the city’s Family Welcome Centers, and they are hoping to enter Marta into school soon.

When Iryna Plaskon grew emotional at the uncertainty of her family’s situation, Marta, clad in a Minnie Mouse dress and wearing a tiara, placed her palms on her mother’s cheeks and urged her to stop crying.

“Mama, don’t be sad,” she said, employing her few words of English.

Iryna Plaskon said when the family fled their home in Lviv, she and her husband decided they wouldn’t tell Marta about the war, figuring it was too much for a young child to understand.