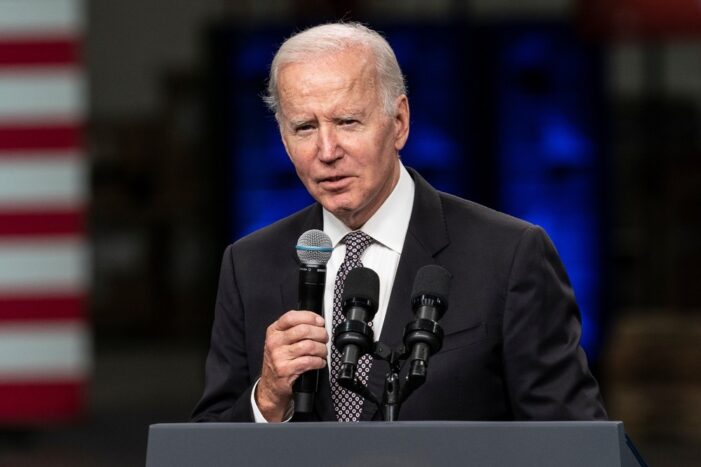 Democracy is at stake in the country that proclaims itself as the world’s bastion of democracy.

That is the judgement of no less a person than the President of the United States of America (US), Joseph Biden Jr. The president made this riveting statement on November 2 in the heart of the Nation’s capital, Washington, DC.

Biden cited several incidents as evidence for his worrying statement. These included an invasion of the home of the House Speaker, Nancy Pelosi, and a savage attack by an intruder on her 82-year-old husband, Paul Pelosi, who was struck in his head with a hammer.

Speaker Pelosi has been the target of far-right supporters of former president Donald Trump, who never formally conceded his overwhelming loss of the November 3, 2020, Presidential elections, and who is being investigated by a select committee of the US House of Representatives for his role in an invasion of Capitol Hill with the intention of stopping the formal acceptance of the elections result. During the invasion, the rioters declared their intention to kill or maim House Representatives, particularly Nancy Pelosi.

President Biden listed a long number of violations of democratic principles and values, including intimidation of early voters for mid-term elections to the Congress on November 8, and death threats to election officials and election workers in a number of states. The president described this situation in the following stark terms: “This violence against Democrats, Republicans, and nonpartisan officials just doing their jobs, are the consequence of lies told for power and profit. Lies of conspiracy and malice, lies repeated over and over to generate a cycle of anger, hate, vitriol and even violence”.

Former president Barack Obama was sufficiently stirred by events that he felt constrained to return to the political hustings to express grave concern about “this erosion of just basic civility and democratic norms”. He warned that: “If the Republican candidates here are successful, Democracy as we know it may not survive in Arizona.” And, he added: “That’s not an exaggeration. That is a fact.”

These circumstances are being played out in the US, not in a country with an immature democracy or a record of disregard for democratic principles of freedom, the rule of law and respect for justice.

Therefore, it is terrifying. For, if democracy is overcome in the US in favour of fascism and tyranny, it will quickly spread the world over with troubling consequences.

Apart from the erosion of democracy elsewhere in the world, and the encouragement that will be given to politicians with autocratic tendencies, the advent of far-right representatives taking control, or significantly influencing, policies and laws created by the US Congress, has consequences for all developing countries.

It is well known, for instance, that Donald Trump and his supporters had little time for developing countries and developed no policies to engage with their development issues. The description of some, mostly black States as “shit hole countries”, the manipulation of several of them in the narrow pursuit of his own political agenda, and the rejection of issues and institutions of vital importance to them caused great alarm. Among the critical issues were the harmful impact of Climate Change and the withdrawal of funding from the World Health Organization. The Trump posture remains, and, if anything, has been strengthened by the Republican candidates who are vying for office on November 8.

The situation is worse for the US House of Representatives, all of whose 435 seats are up for grabs. The Democrats need to win 218 seats to maintain their majority. They now have 221 to the Republicans 211. It is only in recent days that polls are suggesting that the Democratic party could be victorious.

Should the Democratic Party lose control of Congress, the Republicans would not only frustrate the legislative programme of the Biden administration, but they would also advance the policies that they favour, including selling guns; approving excessive behaviour by the police force; ending a woman’s right to choose abortions; closing US borders to immigrants; introduce harsh measures for dealing with refugees to severely reduce programmes to help the poor. Aid programmes to developing countries will also assume a transactional nature, rather than responding to developmental needs.

It is normal in every election for political parties and candidates to hold differing positions. While it should not be acceptable, it has become par for the course that, in their attempt to win votes, parties and candidates spin the truth, exaggerate, and talk down their opponents. However, in the run-up to these mid-terms, candidates of the extreme Republican right wing have been found lying, defaming, and preaching a toxic level of vitriol, including encouraging voter intimidation and tearing down institutions.

President Biden has also pointed out that, “there are candidates running for every level of office in America, for governor, congress, attorney general, secretary of state, who will not commit to accepting the results of the election that they’re running in. This is a path to chaos in America”.

In the context of all this, there is good reason to be alarmed about the threats to democracy in the US and, as a consequence, to threats to freedom, democracy, and the rule of law everywhere.

These mid-term elections might well be a defining event not just for the US but for the world in the struggle for supremacy between democracy and fascism.