Victims are still being identified; shooter was killed by law enforcement. 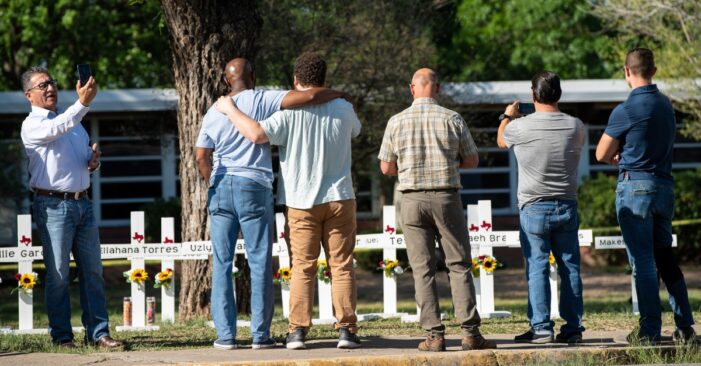 Uvalde, Texas, United States – May 26, 2022: Community members at the Robb Elementary School memorial pray, visit, and leave tokens of affection at the crosses dedicated to the victims of the shooting. (Shutterstock)

An 18-year-old man killed at least 19 students and one teacher at Robb Elementary in Uvalde in what is now Texas’ deadliest mass school shooting, according to the Texas Department of Public Safety.

The shooter was killed by law enforcement officers.

Other victims are expected to be identified pending notification of kin.

As of Tuesday night, some families were still waiting at a community center that is serving as a reunification hub to find out whether their child was among the victims.

We just heard screams inside the civic center. Yet another family hearing the worst news possible pic.twitter.com/bqttzDyhFf

The shooting
The school — located in a rural town of less than 20,000 about 90 minutes west of San Antonio — was placed on lockdown just before noon on Tuesday, the last week of school. Police confirmed the shooter was dead after 1 p.m.

The first scene involved the suspect’s grandmother, who the gunman shot at her home. EMS then airlifted her to a local hospital. Her condition is unknown.

Officers were also called to a crashed truck in a ditch near Robb Elementary after witnesses saw a man walking away from the vehicle holding a long rifle and wearing body armor.

The shooter exchanged fire with a Uvalde CISD officer before he made his way into the school, Olivarez said. Then, he started making his way through classrooms, where he opened fire and killed at least 19 students and one teacher.

He barricaded himself inside a single classroom and “began shooting anyone that was in his way,” Olivarez said Wednesday on NBC’s “Today.” Police and others responding, however, went around to break windows at the school to help students and teachers escape, he said.

All the victims were in the same fourth-grade classroom at Robb Elementary.

“At that point, the law enforcement arrived and made entry into the school, in which a suspect exchanged gunfire with law enforcement,” Olivarez said.

Law enforcement eventually brought down the suspect, killing him.

The suspect was identified by law enforcement as Salvador Ramos, 18, a student in Uvalde. A motive has not been disclosed, and investigators were searching Ramos’ social media accounts for any red flags.

Ramos had hinted on social media that an attack could be coming, according to state Sen. Roland Gutierrez. He legally bought two AR-15-style rifles on Sunday, days after he turned 18.

His grandfather, Rolando Reyes, 72, said he didn’t know his grandson had purchased those weapons.

More on the victims
One of the victims identified in the mass shooting was Eva Mireles, a fourth-grade teacher at Robb Elementary.

According to her bio on the school’s employee page, Mireles was married to a Uvalde CISD police officer and had one daughter. She loved her pets and loved running and hiking.

Audrey Garcia, whose daughter was a former student of Eva Mireles, said she was the best teacher her child has ever had.

Garcia’s daughter is diagnosed with Down Syndrome, and Mireles was constantly going the extra mile for her daughter and integrated her into her classroom, she said.

“My niece, Eva Mireles, approximately 17 yr teacher for UCISD along with another teacher and 18 children lost her lives to a senseless tragic shooting. I’m furious that these shooting continue, these children are innocent, rifles should not be easily available to all. This is a my hometown a small community of less then 20,000. I never imagined this would happen to especially to loved ones. not all the facts have been released yet all we can do is pray hard for our country, state, schools and especially the families of all.”

The first student to be identified by family as one of the 19 killed on Tuesday is Xavier Lopez. His family said he was in fourth grade.

His mother was with him at the school during an awards ceremony just hours before the shooting, not realizing it would be the last time she would see him

Amerie Jo Garza, 10, was just finishing her 4th-grade year at Robb Elementary. Her father waited hours for news about her whereabouts after Tuesday’s shooting only to learn that she was among the victims.

Angel Garza, her father, wrote on Facebook: “Thank you everyone for the prayers and help trying to find my baby. She’s been found. My little love is now flying high with the angels above. Please don’t take a second for granted. Hug your family. Tell them you love them. I love you Amerie jo. Watch over your baby brother for me.”

The fourth victim identified is Uziyah Garcia an 8-year-old student at the elementary school, according to the Associated Press. His grandfather, Manny Renfro, confirmed his identity.

“The sweetest little boy that I’ve ever known,” Renfro said. “I’m not just saying that because he was my grandkid.”

The fifth victim identified is Eliahana Cruz Torres, a student. The family of Eliahana learned late Tuesday night that she was one of the children who was killed.

The sixth victim identified is Rojelio Torres, 10. “Our entire family waited almost 12 hours since the shooting to find out Rojelio Torres my 10-year-old nephew, was killed in this tragedy. We are devasted and heartbroken. Rojer was a very intelligent, hard-working and helpful person. He will be missed and never forgotten,” said Precious Perez, Rojelio’s aunt.

Polly Flores identified her two nieces Annabelle Rodriguez, 10, and Jackie Cazares, 10, as among the students killed in the Uvalde shooting. They were both in the fourth grade, in the same class at Robb Elementary School.

Ryan Ramirez confirmed his daughter, Alithia Ramirez was one of the victims. She was a 10-year-old fourth-grader who loved to draw and wanted to be an artist. She had recently submitted a drawing for the Doodle for Google contest.

The Uvalde Memorial Hospital treated 15 people, and all have been discharged or transferred to another hospital. Two victims arrived deceased at the hospital.

Two law enforcement officers were shot but are expected to be OK, Gov. Greg Abbott said.

“Texans across the state are grieving for the victims of this senseless crime and for the community of Uvalde,” Abbott said. “Cecilia and I mourn this horrific loss and we urge all Texans to come together to show our unwavering support to all who are suffering. We thank the courageous first responders who worked to finally secure Robb Elementary School. I have instructed the Texas Department of Public Safety and the Texas Rangers to work with local law enforcement to fully investigate this crime. The Texas Division of Emergency Management is charged with providing local officials all resources necessary to respond to this tragedy as the State of Texas works to ensure the community has what it needs to heal.”

School canceled for remainder of year
During a news conference, Uvalde CISD Superintendent Hal Harrell said grief counseling would be available for students, staff, parents and community members starting at 10 a.m. Wednesday at the civic center.

“My heart is broken today,” Harrell told members of the media.

Harrell said the school year is done for the year, and all district activities are canceled. He said the district would release more information about graduations at a later date.

The San Antonio Police Department sent resources to the school and is standing by to assist as further needed, Police Chief William McManus said.

“It is with profound grief and broken hearts that we learn about the news coming our way this afternoon. We stand united with the community in Uvalde and offer our assistance. We also mourn with them over the lives of those children and adults lost to violence. Bexar County is sending personnel and material from the Office of Emergency Management, the Medical Examiner’s Office, the Sheriff’s Office, and University Hospital to support the ongoing operation,” Wolff said.

“Uvalde is experiencing the sickening aftermath of a horrific mass shooting. At least 14 children and a teacher are gone. Pray for the lost, their families, and Uvalde. San Antonio has sent mass casualty resources to the region and will do all we can to help our neighbors heal,” he said.