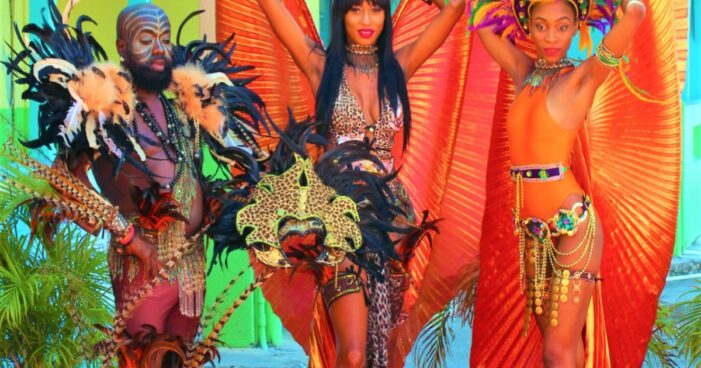 The return of Carnival festivities to the city of St John’s this year has been welcomed by revelers and organizers, as well as the vendors who look forward to the increase in consumer spending each year.

For weeks, discussions were being held about moving Carnival out of the city center, to the vicinity of the Sir Vivian Richards Cricket Stadium to ease congestion.

But those plans to move away from years of tradition were not well received, as many people complained about the distance and said that they would prefer to stick to the conventional location, especially after two years of no Carnival festivities due to the pandemic.

The street vendors, too, were not pleased, saying the move would significantly hamper their sales, and make transporting their tents, tables and other equipment a logistical nightmare.

Many of them welcomed the news from Cabinet that all Carnival activities would remain in the city.

“If you moved it out of town, it would not have been a good thing because you are not going to have the vendors’ support,” one told Observer.

“You aren’t going to have that social and financial support. There’s no way that you would have been able to get the kind of support that you would get in town and in the society like what we are living in you need all the support you can get,” one vendor mentioned.

Some vendors who spoke with Observer on Friday revealed that business has been picking up slowly in the past few days but said they expect it to get even busier in the coming weeks.

They mentioned that due to “the fact there has been no festivities for two years due to the Covid pandemic”, they “expect this year will be one of the busiest” for sales.

“In my experience here, over 20 years, sales pick up during this time with the many tourists and Antiguans and Barbudans coming back home. You would find that there is a hectic three weeks even after Carnival and then it would eventually slow down until the winter season but sales have been good so far. I have no complaints,” another vendor said.

“I am looking forward to getting a lot of business but so far it has not been as busy as I thought, but I am still waiting. I think it is going to be good as more and more people are coming in. I am just being patient,” another mentioned.

While some were optimistic, there were a few who believed that because of the financial impact of Covid-19 around the world, this year will continue to be a slow year for them.

“It’s very slow. The last few Carnival years were a little better but this time it is worse,” one vendor said.

“It’s already slow now and I don’t think it will pick back up then,” another added.

Carnival celebrations will begin officially on July 27 but the popular warm-up parade of T-shirt Mas’ is set to be held today.