‘We Have a Path to Victory’: Maya Wiley Predicts Winning NYC Mayoral Race After Ranked Votes Are Counted 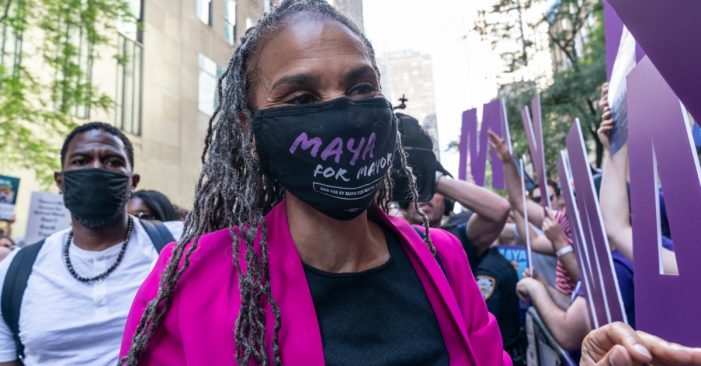 The Democratic candidate, currently in second place behind Eric Adams, urged her supporters Wednesday to “wait patiently” as officials begin the process of tabulating the ranked-choice votes.

Wiley insisted she can overtake Adams, the Brooklyn borough president, who’s leading the initial count with about 31% of the vote compared to Wiley’s 22%.

The de Blasio administration lawyer suggested that many supporters of other candidates may have ranked her above Adams on their ballots, a dynamic that would allow her to leapfrog him into the top spot.

“We have a path to victory and it looks like the city of New York,” said Wiley. “We have seen support from the four corners of this city.”

The progressive Democrat ticked off her diverse coalition of supporters, including young white progressives and Black and Latino voters, that she predicted could drive her to victory.

Wiley noted that just under 50% of all voters cast ballots for someone other than her or Adams. That means those voters who picked one of the other mayoral candidates hold the key to victory with their lower-ranked choices, she said.

“We’re excited about being in the No. 2 spot right now by the way doing better than any polls said we would,” Wiley said. “We have very little data. So much about what people gauging this race on has been polls and the only thing that matters is people.”

Adams, who spoke confidently to a crowd of supporters on Primary Night, had not yet appeared in public Wednesday.