What I see in Jada Pinkett Smith 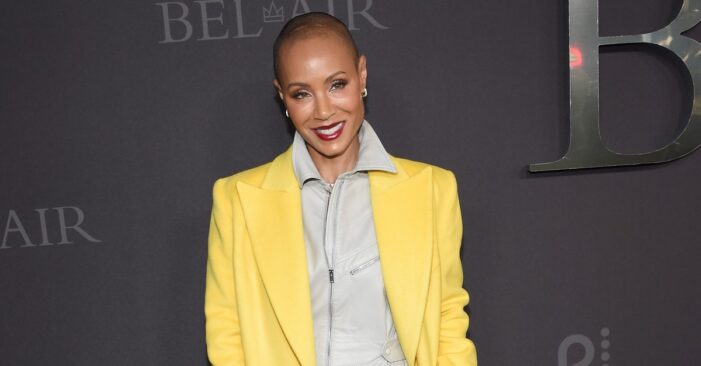 I was mesmerized the first time I saw Jada Pinkett Smith’s shaved head on television—so mesmerized that I remember neither what she was wearing nor the red-carpet event she graced that day. I just remember thinking, Wow, she has a new look, and she looks gorgeous! Like regal, queen-to-be gorgeous! Beaming on that carpet at just five feet, she stood tall in confidence. On Sunday when she walked the red carpet at the 94th Annual Academy Awards, I was in awe again. And although I wasn’t surprised that a comedian—in this case Chris Rock—took a quick jab at her hair (or lack thereof) during the ceremony, I was surprised when her husband, actor Will Smith, walked onto the stage, hit Rock in the face, and yelled at him. My ensuing internet search about the incident revealed that Pinkett Smith suffers from alopecia, a disease that causes the immune system to attack hair follicles.

Prior to this, I had no idea that her new do resulted from a medical condition. I thought Pinkett Smith had embraced beauty on her terms: boldly and in defiance of cultural beauty norms. But a deeper internet dive revealed that she had spoken publicly about the disease and its impact on her life since 2018, vulnerably recounting the story about when her hair first fell out: She was in the shower, and mounds of it came out in her hands, causing her to shake in terror and fear. I also watched this Instagram video where Pinkett Smith candidly showed a line that had formed across her balding head.

As I watched, I saw a woman working through a very personal trial but in public. I saw a woman working through embarrassment to acceptance. I saw a woman intentionally educating the public to anticipate an onslaught of careless comments and lingering stares. I saw a woman determined to embrace her beauty and personhood without covering up in shame. That video showed Pinkett Smith doing what Black women have been forced to do for centuries: turning sour lemons into mouthwatering lemonade and a slice of lemon meringue pie. “Mama’s gon’ put some rhinestones in there, and I’m gon’ make me a little crown—that’s what mama’s gonna do,” Pinkett Smith said, smiling.

This newfound information put Smith’s actions into context, coupled with the fact that in 2009 Rock produced Good Hair, a documentary about Black women’s struggles to navigate their hairstyles amid Eurocentric beauty standards in the U.S. The documentary opened up a national dialogue about the pressure many Black women feel to have long, straight hair. In light of this, Rock could’ve used the Academy Awards—one of the world’s biggest stages—to compliment Pinkett Smith on how stunning she looked, which would’ve acknowledged her beauty, her struggle, and every person who privately or publicly suffers from alopecia. Yet Rock chose to use his power and platform to publicly mock Pinkett Smith’s disease-induced hairstyle. At his remarks, Pinkett Smith simply rolled her eyes. She has intentionally spoken about her diagnosis publicly to ward off unnecessary scrutiny; to shed light on a disease that disproportionately impacts Black women and other women of color; and to embrace her body’s evolution, however unwelcome and unexpected.

Let’s not forget: This isn’t the first time a Black woman’s Oscar hairstyle has been picked apart publicly. On the 2015 red carpet, Giuliana Rancic, then E! News anchor and Fashion Police host, commented on Zendaya’s locs, saying that the Black actor probably “smells like patchouli oil…or weed.” Zendaya eloquently responded by penning a lengthy Instagram post. “There is a fine line between what is funny and disrespectful,” she wrote, heralding the importance of Black hair and hairstyles being not only free from public mockery but celebrated in the public sphere. Academy Award–winning actor Viola Davis modeled this when she ditched her wigs and rocked her natural hair for the first time publicly at the 2012 Oscars. Two years later she would reveal that she suffers from alopecia.

But red-carpet conversations are one small aspect of a larger issue that is finally being addressed in the U.S. In 2019 California became the first state in the nation to introduce and pass the CROWN (Creating a Respectful and Open World for Natural Hair) Act, which banned race-based hair discrimination in the workplace and public schools. This law was authored by then California state senator Holly J. Mitchell, who wears her hair in locs.

Today similar legislation has passed in 14 U.S. states and many cities and counties throughout the country, according to the Crown Coalition’s website. In fact, earlier this month the House of Representatives passed the federal CROWN Act of 2022. If it passes the Senate and is signed into law, then workplaces, schools, and programs funded by the federal government will be unable to discriminate against race-based hairstyles, which include locs, braids, Afros, and shaved heads.

In 2020 Representative Ayanna Pressley of Massachusetts’s 7th Congressional District, who was one of the first elected government officials to wear braids while campaigning, revealed that she has alopecia. Since the announcement, she’s raised awareness about the disease and the need for the federal CROWN Act. Just as importantly, she’s unashamedly rocking her bald head in congressional halls and on national TV. Cultural perceptions around beauty and professionalism throughout the country are expanding—or perhaps more accurately, imploding—thanks to the Black women who are at the helm of this shift. (Just ask the Dora Milaje.)

It’s unlikely that Rock will be the last comedian to mock a Black woman’s hair, given that public perception around natural Black hairstyles still needs to undergo a seismic shift even if the federal CROWN Act legislation becomes law. But in the meantime I will marvel at stars like Jada Pinkett Smith, Viola Davis, and Zendaya every time they take center stage because when I see them, I don’t just see their boldness or advocacy or even their beauty. I see their strength. I see them presenting their full selves to the world without fear.