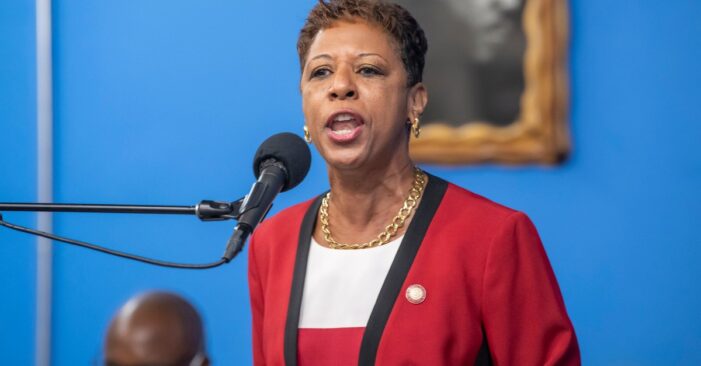 See below for what they are saying:

“Too many lives have been lost. Too many live in fear. We have a moral obligation to confront the gun violence epidemic, and that means working with leaders at all levels of government to keep New Yorkers safe,” said New York Governor Kathy Hochul. “Glad to have a public safety partner in [Mayor Adams].”

“We have lost too many of our sons and daughters to the epidemic of gun violence,” said U.S. Representative Gregory W. Meeks. “Mayor Adams’ plan to combat this public health crisis is a real jolt of leadership at a critical time, and I will be a partner in this pursuit of public safety.”

“I am in full support of Mayor Adams’ ‘Blueprint to End Gun Violence,’ and I am ready to be an ally in getting it implemented,” said U.S. Representative Tom Suozzi. “Too many lives are being lost on our streets, and inaction is not an option. Mayor Adams understands the balance between intervention and prevention that is needed to save lives, and it will take all of us to make it happen.”

“We appreciate the mayor’s focus on the epidemic of violence our city faces and the need for multiple solutions, as the problem is complex and requires multifaceted approaches,” said New York City Council Speaker Adrienne Adams. “An important way we can support the NYPD in its efforts to improve public safety is by expanding our commitment to complementary public safety work by other stakeholders in every city agency and community partner that can help prevent crime and violence — this plan starts to recognize that reality. We strongly welcome the mayor’s focus on strengthening community-based violence prevention programs, mental health care, and investments in youth employment — and we’re glad these are so central to the plan and conversation, providing a great starting point. The mayor’s advocacy for action on gun control in Washington and efforts to target gun trafficking is also critical.”

“We have lost too many loved ones to gun violence, and these incidents have traumatized families and created fear throughout the city,” said Manhattan District Attorney Alvin Bragg. “Combatting gun violence is a top priority for our office and I applaud Mayor Adams’ leadership, commitment, and focus on stopping gun violence. We will partner with him and all who will join us in the urgent tasks of getting drivers of crime off our streets, cutting off the flow of illegal guns to our city, and building up community-based supports for people who are struggling.”

“Gun violence is a public health crisis, an epidemic that we must end,” said Manhattan Borough President Mark Levine. “Mayor Adams has laid out a plan to move us towards this vital goal, by stemming the flow of guns into our city, investing in the social services that are proven to prevent crime, increasing the clearance rate for gun crimes, and more. I am particularly heartened to see his commitment to expanding hospital-based violent intervention programs, and his focus on connecting those with severe mental health challenges to the services they need. I look forward to partnering with Mayor Adams to make our city safer, healthier, and fairer for all.”

“Gun violence results in devastating personal, family, and community trauma; that is why I welcome this cross-government approach to tackling gun violence,” said New York State Senator Leroy Comrie. “The key facets we must include are prevention, engagement for young people, stepped up resources for units focused on illegal guns and on gun trafficking — these elements constitute the kind of overarching approach to public safety New York City needs. I commend Mayor Adams for his comprehensive response, and I am committed to joining with my colleagues to help end the scourge of gun violence. We must ensure our shared communities secure the safety and peace of mind we all deserve.”