What’s Going on With Brittney Griner, the WNBA Player Currently Detained in Russia? 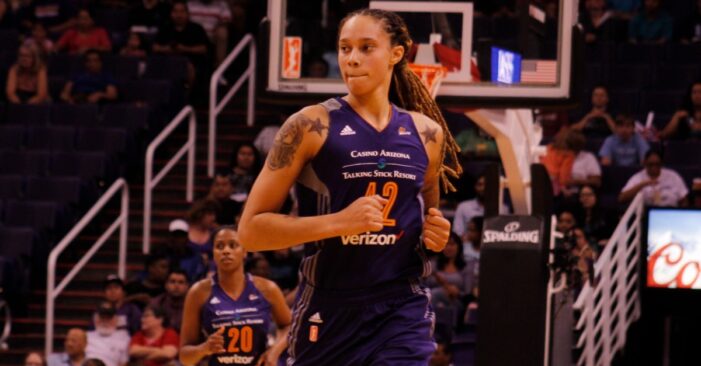 Last week, news broke that star WNBA player Brittney Griner was being detained by the Russian government on drug charges. This is a worrying state of affairs given Russia’s current invasion of Ukraine, and all the more so given that Griner is a Black and openly queer woman (two identities that are perennially marginalized in Russia and its surrounding countries). Below, find a guide to everything we know about Griner’s detention:

Who is Griner?
Griner, 31, is a three-time All-American from Houston who currently plays for the Phoenix Mercury. In 2012, she became the first NCAA basketball player to both score 2,000 points and block 500 shots; she has won two Olympic gold medals; and she signed an endorsement deal with Nike in 2013.

Why is she being detained in Russia?
Griner, who plays for a Russian Premier League team during the WNBA off-season, was detained by the Russian Federal Customs Service after the agency claimed its officials found vape cartridges that contained hashish oil in her luggage at the Sheremetyevo airport near Moscow. The Customs Service did not initially release Griner’s name, but it was quickly published by a Russian news agency. Griner’s alleged crime can carry a sentence of up to 10 years in prison in Russia.

How long has Griner been detained?
Video of Griner’s airport screening was taken at the end of February, meaning that by now Griner could have been detained for as long as a week. Not much is known about where she’s being held, however.

Is this being considered a hostage situation?
While there is speculation that Russian president Vladimir Putin may be holding Griner in order to use her as what one former Pentagon official referred to as a high-profile hostage, no terms conditional to her release have yet been issued (or at least made public) by the Russian government.

What steps are being taken to get Griner back?
Griner’s agent, Lindsay Kagawa Colas, has released a statement saying, “We are aware of the situation with Brittney Griner in Russia and are in close contact with her, her legal representation in Russia, her family, her teams, and the WNBA and NBA. As this is an ongoing legal matter, we are not able to comment further on the specifics of her case but can confirm that as we work to get her home, her mental and physical health remain our primary concern.” The WNBA echoed this sentiment, saying in its own statement that Griner “has the WNBA’s full support and our main priority is her swift and safe return to the United States.”

On Sunday, U.S. Secretary of State Antony Blinken weighed in on Griner’s detention, saying, “There’s only so much I can say given the privacy considerations at this point. Whenever an American is detained anywhere in the world, we of course stand ready to provide every possible assistance, and that includes in Russia.”

Has Griner’s family commented on the situation?
Griner’s wife, Cherelle Griner, posted an image of the two in happier times to Instagram on Saturday, writing, “Thank you to everyone who has reached out to me regarding my wife’s safe return from Russia. Your prayers and support are greatly appreciated. I love my wife wholeheartedly, so this message comes during one of the weakest moments of my life. I understand that many of you have grown to love BG over the years and have concerns and want details. Please honor our privacy as we continue to work on getting my wife home safely.”