Why is NYC’s Economy Still Lagging? Take a Close Look at Construction, Entertainment and Retail 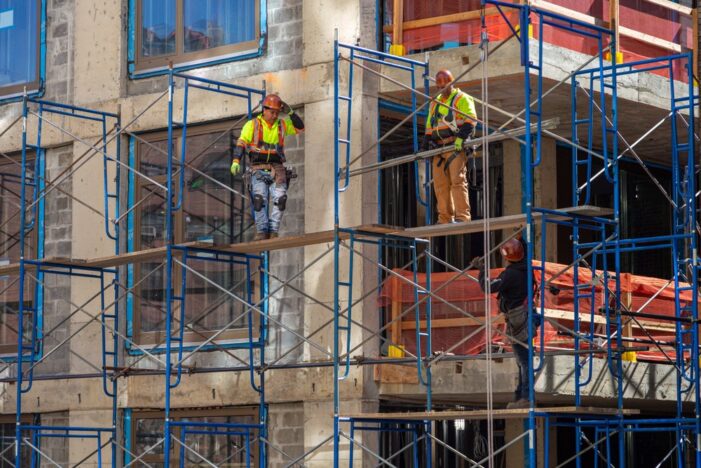 By Greg David, THE CITY

In the summer of 2019, with the city’s economy booming and with tourists arriving in such numbers that a record 67 million would visit New York by the end of the year, leisure and hospitality jobs hit a record 474,000.

In the summer of 2022, as the city still struggles to recover from the pandemic recession, the number of jobs at restaurants, hotels, arts and cultural institutions stands at 404,000 — a tumble by almost 15%.

Cranes crowded the skyline in that summer three years ago and some 163,000 people worked putting up new hotels, office buildings and residential buildings. This summer, 20,000 fewer people are employed in the construction industry, a number that hasn’t budged in months.

The rise of online shopping had begun to pinch retailers by mid 2019, but still 346,000 people worked in stores. Despite the recovery from the pandemic, that number is only 306,000 today, with little prospect of significant gains in the coming months.

To understand why New York City’s economy is still struggling to recover its pre-pandemic mojo, looking at the reasons behind lagging job numbers in those key areas of entertainment and hospitality, construction and retail is the place to start.

July represented a watershed, as the nation recovered all the jobs lost in the pandemic. New York, however, has regained only 82%.

Experts are quick to point to the areas of strength in the economy.

The technology sector is well ahead of its pre-pandemic job level and gains in the city have outpaced those in the rest of the country. Finance, especially Wall Street, remained strong throughout the recession, and the recent market rebound has lessened fears of layoffs there. Health care too is expanding.

Those areas, however, haven’t been enough. And the story behind the weaknesses of leisure and hospitality, retail and construction connect the city’s new biggest problems: not enough big-spending international tourists and not enough office workers, period. And, of course, New York was hit first and harder by both the coronavirus and the resulting business shutdown.

“The pandemic crushed the hospitality industry in New York so hard especially compared to other cities that had fewer restrictions and where businesses may have received more support,” said Andrew Rigie, executive director of the New York Hospitality Alliance.

The city Independent Budget Office compared the sector’s rebound in New York to that in other major tourism destinations like Orlando, Las Vegas, Washington, South Florida and San Francisco. All have regained a higher percentage of lost jobs than New York.

One reason is that some 19,000 hotel rooms remained shuttered, according to the Hotel Association of New York City. Several of those are concentrated along Lexington Avenue in Midtown, whose primarily clientele was business people coming to visit clients in Midtown.

While many international tourists have returned in surprising numbers, their ranks do not include the Chinese, who are still unable to travel because of that country’s strict coronavirus protocols. China before the pandemic had been expected to be the No. 1 source of visitors to the city.

It isn’t just hotels and restaurants, of course.

Broadway attendance is still only about 80% of pre-pandemic levels, and long running shows are closing this summer, including “Dear Evan Hansen” and “Come From Away.”

And retail districts, especially in Midtown, are simply not seeing their traffic recover. Almost half the stores in Herald Square, a mecca for both tourists and office workers, are vacant, according to data from Cushman & Wakefield.

The pandemic has chilled the climate for construction, which is stalled at 15% below its pre-pandemic level.

Virtually all the construction underway is on buildings started before the pandemic, notes Louis Coletti, president of the Building Trades Employer Association, with little new activity in housing, commercial and government-funded construction.

Prospects for the remaining four months of the year have been pared back because of surveys that show that office workers are unlikely to return to large numbers.

“I think there is reason to be concerned about growth in the rest of the year,” said Michael Jacobs, chief economist for the Independent Budget Office, “particularly in respect to office employment.”

A city comptroller report earlier this month said surveys show no significant increase for in-person office attendance is likely this fall. A report from the Federal Reserve Bank of New York last week titled “Remote Work is Sticking” suggested the current levels of in- and out-of-office work are likely to persist for years.