Why Isn’t Brittney Griner the Biggest Sports Story in the Country? 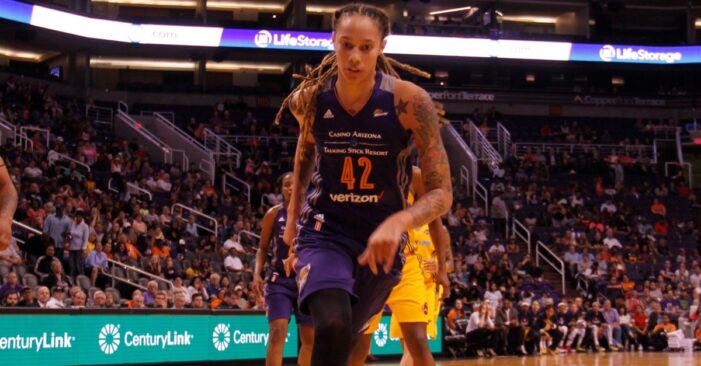 By Will Leitch, NY Mag

The second-best player in every sport is a superstar at a level that 99.999 percent of professional athletes — who are already the elite of the elite of the elite — will never come close to achieving. Joel Embiid finished second in NBA MVP voting last year; in baseball (a sport once actively played in this country), it was Vladimir Guerrero Jr.; and in football, it was Tom Brady.

In the WNBA, the Phoenix Mercury’s Brittney Griner earned this distinction last year. She was second in scoring, sixth in rebounds, first in blocks (she’s on track to become the WNBA’s all-time leader in that category), and, according to most advanced metrics, the best offensive player in the league. Her résumé is glittering: She won an NCAA national championship for Baylor in 2012, the same year she captured college basketball’s Player of the Year Award. She then won a WNBA championship in 2014 and was selected as one of the best 25 players in league history in 2021. She has two Olympic gold medals to her name. In the gold-medal game against Japan in Tokyo last summer, she dominated, scoring 30 points to clinch an easy victory. She is the apex of her sport. She is the best of the best. She is a legend.

And for more than a month now, she has been in the custody of the Russian government. Yet until Russian officials released a statement over the weekend saying they had detained Griner after finding hashish oil in her airport bag, it seemed that nobody had noticed. And the reaction since the arrest has been stunningly quiet. One of the greatest athletes in American sports — a gold-medal winner, a superstar, a champion — was arrested in a dangerous and volatile country that has suddenly become a pariah on the world stage. Making equivalences between sports only takes you so far here, but seriously: Imagine if Tom Brady were being held by Russian officials right now.

It is unclear how directly Griner’s plight connects to the catastrophic Russian invasion of Ukraine, and her detention has been overshadowed by the death and destruction wrought by Putin. And part of the muted response is likely due to sensitivity of the negotiations between Russian and American officials. Griner’s wife asked for privacy on Instagram, and it’s clear the precariousness of the situation has led to a certain institutional resistance to even mentioning it: That WNBA.com doesn’t include a single story about one of the organization’s best players being detained speaks to this dynamic. It is also worth remembering, as ESPN’s T.J. Quinn did on Monday, that Griner, whatever the specifics, is likely in some danger; Quinn noted that “as a 6-9 Black gay American woman, she’s a powerful cultural symbol,” and “even in the best case, she’s in for a long legal slog in the Russian criminal justice system. And there’s little the US govt can do about it.”

Another motive the WNBA may have for staying quiet is its own culpability in the situation. The reason Griner was in Russia in the first place — to play off-season basketball, as she has done there for years — is that the league does not pay its superstars the way other sports leagues do. As Tom Ley from Defector pointed out:

The league’s low salaries and minimal efforts towards player support have for years forced even its biggest stars to treat their time in the WNBA as a part-time job. The maximum WNBA salary in 2022 was just over $228,000, and players can make far more than that playing in leagues overseas. In 2015, Diana Taurasi was paid $1.5 million to skip the WNBA season entirely and play for UMMC Ekaterinburg, and Liz Cambage recently revealed that she has made “five to eight times” as much money playing overseas than she has in the WNBA.

Before you say, “Well, the WNBA isn’t as popular in the NBA; of course Griner wouldn’t make as much as LeBron,” remember this: The WNBA has a salary cap, and one that’s particularly suppressive of superstar wages. Griner only made $221,450 for the 2021–2022 season, which is less than a third of the minimum salary in the NHL, but nevertheless classifies her as the fourth-highest-paid player in the WNBA. A new CBA signed two years ago was supposed to address these issues, yet there was Griner, making a mint playing for UMMC Ekaterinburg in Russia. The WNBA’s MVP last year, Connecticut Sun forward Jonquel Jones, plays for the same Russian team. She got out of the country just after the invasion of Ukraine began.

Just landed in Turkey and all I want to do is cry. That situation was way more stressful than I realized. Thank you God for always watching over and protecting me 🙏🏾🙏🏾🙏🏾

Liz Cambage, a star for the Los Angeles Sparks, has noted that players can make “five to eight times more money” for Russian teams than they do in the WNBA, despite the league being by far the most high-profile women’s basketball league in the world. And restricted cash flow isn’t the only problem for players: Just last week, the league fined the New York Liberty $500,000 for chartering flights to games, claiming this gave the Liberty a “competitive advantage.” (For perspective, almost every team in the collegiate NCAA tournament next week will arrive at their destinations via chartered flight.) Griner didn’t choose to go play in Russia. The league left her no choice.

The precarity of Griner’s position in Russia may give the WNBA a good reason to stay quiet about her case. But perhaps the league would also prefer not to dwell on how she ended up in this situation in the first place.

In any case, it’s not just the WNBA downplaying this story. There was also no mention of Griner on the front pages of ESPN.com, CBS Sports, and SI.com just 48 hours after news of her arrest landed.

The playbook after a kidnapping is to downplay it so as to allow for negotiations. But there's 0 mention of Brittney Griner's detention on https://t.co/nzJdUO7FHq, no mention in the 30 stories on the homepage of https://t.co/tbMGsYl6KK At least some attention must be paid

This strange reaction comes at a time when the WNBA has surged in popularity. Last year’s finals, featuring Griner’s Mercury, put up the highest ratings ever, a full 49 percent jump from 2020. This is partly because of the league’s activism, which has increased its visibility in a dramatic way. And Griner has been right in the middle of it all, wearing Breonna Taylor’s name on her jersey and speaking out in favor of LGBTQ+ issues since before she even entered the NBA. She was also the first openly gay athlete ever signed to an endorsement deal with Nike. Her teammate Diana Taurasi, perhaps the best player in WNBA history, called Griner “a pioneer.”

As Griner sits in detention in Russia, as a result of a system that is set up to devalue her and other stars at every corner, it would be nice if her plight received attention commensurate with its seriousness.