Amanda Gorman’s Poem on Texas Shooting has Captivated the Internet 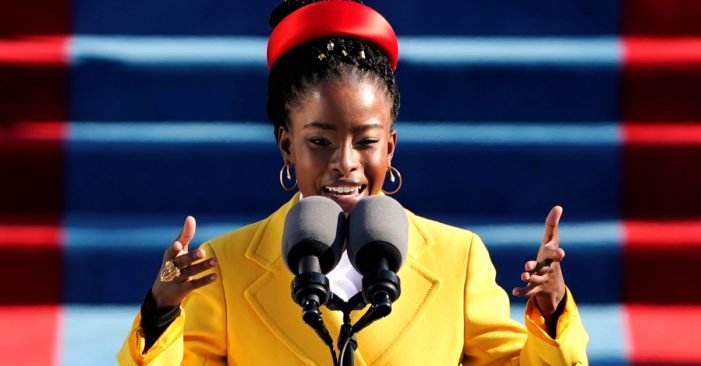 Tuesday’s school shooting has left many people at a loss for words, overwhelmed with emotion. In her latest poem, Amanda Gorman is capturing those feelings and transforming the speechlessness into stanzas.

The poet and activist, 24, took to social media Tuesday to share the gun violence-focused verse.

“Schools scared to death. The truth is, one education under desks, Stooped low from bullets; That plunge when we ask Where our children Shall live & how & if,” she writes.

In a series of tweets, Gorman continued.

On Tuesday, a gunman killed at least 19 children and two teachers at an elementary school in Uvalde, Texas, making it the deadliest shooting at a U.S. grade school since the 2012 attack at Sandy Hook Elementary School in Newtown, Connecticut.

Federal law enforcement officials told the Associated Press that the death toll was expected to rise.

Gorman’s words have been flooded with reactions. In less than 24 hours since her post, one of her tweets has garnered more than 488,000 likes. On Instagram, she’s surpassed half a million.

People have also responded, sharing thanks for capturing their thoughts and emotions.

“How gracefully you speak the truth. thank you,” another wrote.

“Thank you for your voice,” another commented. “I feel with you maybe change can happen.”

Experts say art can help in dealing with trauma and processing loss.

Art can be its own form of activism too.

Although the term that many people use for this kind of work, artivism, feels new, the idea that artists also serve as activists and leaders of cultural change has a deep-rooted history.

“Artists have always been at the lead of protest, resistance and hope in Black communities and other marginalized communities across the country,” Aaron Bryant, the curator of photography and visual culture at the National Museum of African American History and Culture, previously told USA TODAY.

Not just words but action
Gorman didn’t stop at sharing her words. The poet used her platform to take action too, sharing a fundraiser on Instagram for the organization Everytown for Gun Safety.

“Americans – you know enough is enough. If you do anything today, let it not be just to grieve, but to act,” she captioned her post, adding information on where people could donate.

Followers were thankful for the focus on action too.

“Thank you Amanda for using your platform to do this,” one user commented.

“Action > thoughts & prayers,” another wrote with the hashtags #donate and #vote.

A Harvard graduate and National Youth Poet Laureate, Gorman made history in January of 2021 as the youngest inaugural poet in U.S. history. Since then, she’s appeared on the cover of Vogue and Time magazines and has been interviewed by Oprah Winfrey and Michelle Obama.